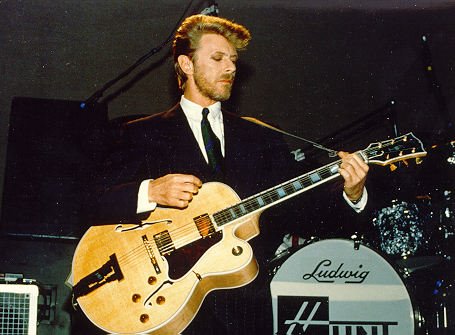 To add balance to our month long celebration of David Bowie, Mike Furber casts a more critical and personal eye over the career of the Thin White Duke:

The thing with Bowie is that ultimately he’ll let you down. As someone who first picked up a guitar with the sole imperative of learning the riffs from ‘Ziggy Stardust’ and ‘Rebel Rebel’, I stuck with him longer than most, and had my patience sorely tried by some incredibly insincere work over the years, including duets with the likes of Tina Turner and Queen, not to mention some very questionable acting. I finally gave up, exhausted, around the time of ‘Tin Machine’, but had stuck around long enough to form a view on the celebrated ‘Thin white duke’. The final nail in the coffin of my belief in him as an artist was seeing him live on his ‘Greatest Hits’ tour at Maine Road Manchester in 1990, when he disinterestedly trotted through a lacklustre selection of his best songs, seemingly without any emotional connection to them or his audience.

Oh, I know there are some gems in his back catalogue, that he pushed popular music into the realms of an art form to be taken seriously by the highest of brows, that he has genuinely demonstrated the capacity to evolve and not rest on his past achievements. It’s just that, ultimately, I can’t detect any real joy or love of the music at the heart of it all. Like that other well known chameleon Madonna, I am suspicious that the all-consuming desire to stay ‘relevant’ hides an emptiness and a spiritual sterility that no amount of cocaine or Thai Chi could ever fill, even in the 1980’s.

Bowie’s well-documented struggles with drugs and personal demons produced some genuinely fascinating work throughout the 70’s: edgy, ground-breaking music made with undeniably high calibre collaborators including Mick Ronson, Brian Eno, John Lennon and Iggy Pop. His music looked and sounded like nothing that had come before: other-worldly lyrics perfectly sung over pristine, shimmering guitar work by Ronson, challenging society’s hypocrisies with an edge of cynicism that gives a counterpoint to the idealism of the 1960’s. The nightmarish, dystopian visions mirrored the darkness of his personal demons in this period, giving the work an unsettling poignancy that many have tried to imitate over the subsequent decades. His best songs from this era, like the majestic ‘Heroes’ and the beautiful ‘Wild is the wind’, have an anthemic quality that it’s hard to detect in much of his modern work.

From the ‘Scary Monsters’ album onwards you just get the impression he’s searching for something to say, for a bandwagon to jump on, even for a cause to believe in. The slick, cocaine-fuelled white boy funk of 1983’s ‘Let’s dance’ is professional but unsatisfying; his turn at 1985’s Live Aid seemed to briefly wake him from his torpor into something resembling sincerity, before he became suckered into becoming a Hollywood novelty act that got acted off the screen by a wooden Patsy Kensit in the disastrous ‘Absolute Beginners’ musical.

Into the 90’s and he makes the predictable mistake of tying himself to the ephemeral dance music scene populated by public schoolboys carrying glow-sticks – his mellifluous baritone lending gravitas to the odd track and there are some vaguely interesting experimental albums, but you just got the impression he was letting himself down somehow, that he was so much better than that.

Bowie himself must have felt some or all of these things about his own work, judging by the amount of time he went without releasing any material at all. His self-deprecating turn in Ricky Gervais’s ‘Extras’ in 2006, singing ‘Little fat man who sold his soul’ was the only new music heard from Bowie in a ten year period spanning 2003 and this year. In the programme, Bowie plays himself as a cynical, disinterested chronicler of others’ misfortune able to knock out throwaway, singalong ditties at will. Even allowing for Gervais’s jaundiced input, you have to wonder how much of ‘the real David’ this portrayal represents.

That his best work centres on dramatic artifice is both its strength and its weakness, as you finally come to the question of what David himself has to say, you’ll be left empty handed and with the slight feeling of being cheated by a man in an expensive suit. The best description I heard of him was that he ‘was like a photograph of a photograph of a hologram’ and it sums up the ambivalence of his work, including the recent comeback single ‘Where are we now?’. So, all in all, don’t get me wrong, I think he’s made some great music, but I think the ‘Pick and mix’ approach to music of the downloading generations presents them with a selective picture of Bowie’s work; one that makes little chronological differentiation between his best work and 30 intervening years of mediocrity and carefully shrouded mystique.