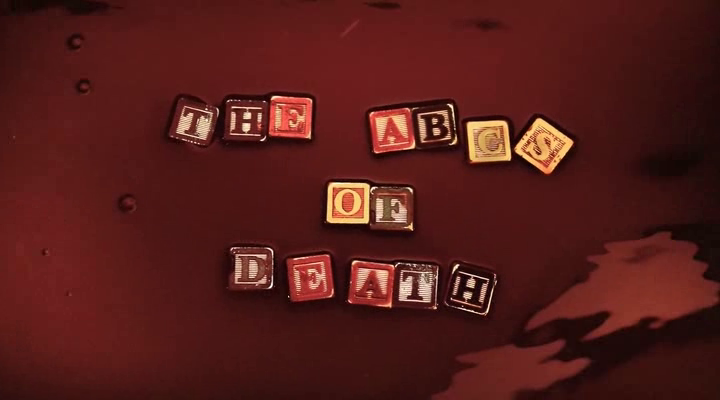 B: This may be the least intense execution of a horror ever put to film. It’s certainly one of the most incompetent and during I suddenly became very grateful of the scant runtime. Dir: Adrián García Bogliano 0/5

C: Managing to make 5 minutes feel like 5 hours, the creator appears to believe he has a mind bending concept on his hands as opposed to a rather dull concept on the bottom of his shoe. Timecrimes (2007) is the film this segment wants to be when it grows up, which was actually made by the director of the opening short. Dir: Adrián García Bogliano 0/5

E: Likeable actress Ms. Bettis may want to remain in front of the camera. Cheap CGI spiders? Is that it? Yep that’s it! From the off it is completely void of the adequate creep needed to provide anything in the way or interest. Dir: Angela Bettis 0/5

F: Right on cue the first Japanese entry shows up with its fists full of crazy and poised to smear that crazy all over our faces.  Vastly silly but most jarringly introducing a running theme of bowel based humour that near sabotages any tone that the whole project might be trying to establish. The only exception to this ill-advised pattern begins with the letter T. Dir: Noboru Iguchi 1/5

G: Brace yourself for some contemporary POV action. Or rather sit in calm anticipation through 5 minutes of scenic lead up to next to nothing. Dir: Andrew Traucki 1/5

H: One of the more unique efforts but also a strong argument for why cartoon aesthetics translated into live action are a bit too unsettling. At its best displaying some weird humour and accomplished FX. Not bad for a fetishistic Furry’s wet-dream. Dir: Thomas Cappelen Malling 2/5

J: Continued J-sanity with samurai, mercenary gurning and giggly gore, it also surely deserves some imaginary award for being the first entry to make me audibly laugh. Dir: Yudai Yamaguchi 3/5

K: A cartoon non-hilarity that tacks on an ill-fitting ending and generally misses any mark. This skit notably risks ruining things especially being placed amid some of the strongest entries. Really disappointing when you realise it’s by the director of the solid Danish animation film Princess (2006). Dir: Anders Morgenthaler 0/5

L: Otherwise known as Indonesian-crass-contest-of-doom pushes the realms of taste like a trooper and wades around in vile lunacy along with some seriously dark humour. Easily one of the best segments (if not the best overall), near unrivalled in the impact stakes and assuredly not for the sensitive. Short, sharp shock at its best. Dir: Timo Tjahjanto 5/5

M: ‘’Really now Ti West with this and your V/H/S instalment I am really starting to worry about you.’’ A vapid visual gross-out that is supposed to be a bit edgy but just isn’t. Dir: Ti West 0/5

N: A note of levity that while not unwelcome isn’t exactly inspiring. A simple a comedy sketch that while sort of mildly funny is overwhelmingly un-horror. Dir: Banjong Pisanthanakun 2/5

O: Some pretence involving oddly subdued S&M innuendo and bubbles. Occasionally resembling something stylistically pretty (or should that be eighties) but an awkward fit in the run that leaves no impression other than a dated after taste. Dir: Hélène Cattet & Bruno Forzani 1/5

P: A competent and refreshing break from some of the more puerile entries, not so much in complexity but in being a fair few notches up on the effective scale and having a far less by the numbers genre set up and conclusion. Dir: Simon Rumley 4/5

Q: Fellow V/H/S fault figure Adam Wingard goes all Meta with his effort, a dicey move that thankfully pays off in a vaguely satirical and satisfyingly funny manner. This will go towards you climbing off my anthology shit-list someday Wingard. Dir: Adam Wingard 4/5

R: An icky Cronenbergian art-house Frankenstein, hopefully those words make sense in some order as it’s basically what you have in this short. Either way its miles better than Spasojevic’s previous feature-length A Serbian Film. Dir: Srdjan Spasojevic 3/5

S: If there is one thing worse than terrible horror it is terrible exploitation, especially when aping an already derivative Robert Roderiguez on his laziest day. With an arsenal of self-conscious swearing and no vision, it appears leagues of people still believe that some celluloid reel after effect, stock girls with alternative hair, bad dialogue and plastic weaponry make for a wild ride. Embarrassing. Dir: Jake West 0/5

T: Managing to be quite funny and the most endearing. Partly due to its inclusion through winning a competition for the anthology and also being that it’s good old homely Claymation with a comically British approach. Dir: Lee Hardcastle 4/5

U: Regional zombie POV that doesn’t set the world alight but also doesn’t disappoint. It does provide a rare glimpse of empathy for the unseen ghoul and feels like a slightly fresher angle on the undead. Not bad after my none-more negative experience with Kill List (2011), especially with this seemingly filmed on location between Kill List’s scenes. Dir: Ben Wheatley 3/5

V: A weighty live action Playstation-4 cut scene with a few too many ideas than it’s able to convey in it’s short time. Robotic-pizazz and some interesting potential as either a superior video game or an average (or less than) genre film are positives but it does wind up feeling like a work in progress trailer for film investors. Dir: Kaare Andrews 3/5

W: Another attempt at being post-modern. Those behind the scenes step forward and aim for the chaotic charm of Troma but the results are a bit too scrappy and not quite funny enough. Dir: Jon Schnepp 2/5

X: Hooray for body horror, this holds as the most visceral entry and is every inch a Xavier Gans film namely with its innate ability to be stylish and graphically bleak, very in line with the current wave of French horror, explicit and evocative. Dir: Xavier Gans 4/5

Y: Eisener’s stand-out has a real glint in its eye, is unique and prods at taste levels with the Canadian’s vibrant signature style which we saw in the highly likeable funfair that was Hobo with a Shotgun (2011). Dir: Jason Eisener  5/5

Z: Dr. Stranglove meets Tokyo Gore Police meets Ilsa She Wolf of the SS, or Nazi-Yakuza-Mutant-Rice-ploitation to coin a phrase. Although I had little to no clue of what was going on I did get that it is roundly Nishimura, visually memorable and if nothing else a decently hi-energy note to end on. Dir: Yoshihiro Nishimura 3/5

Aside from the grindingly weak toilet humour ABCs was better than I’d anticipated, the flow through of the collection wasn’t too much hard work and although there are several duds those being so brief definitely helps matters. The project is undeniably ambitious but unsurprisingly inconsistent. Still it falls closer to the positive than many recent horrors have and the international variation and handful of fresh ideas make for very welcome elements. The ABCs of Death is definitely a step in the right direction as far as horror displaying some imagination, let’s just hold out hope for this year’s other anthologies V/H/S-2, Sanitarium and The Profane Exhibit, although as Uwe Boll is the headlining director for latter best not to get too excited.

*I chose not to name the titles of each short as several serve as crucial spoilers.

The ABCs of Death is out in the UK on 26th April.

0 thoughts on “An admirable if inconsistent horror anthology – The ABCs of Death Short by Short Review.”