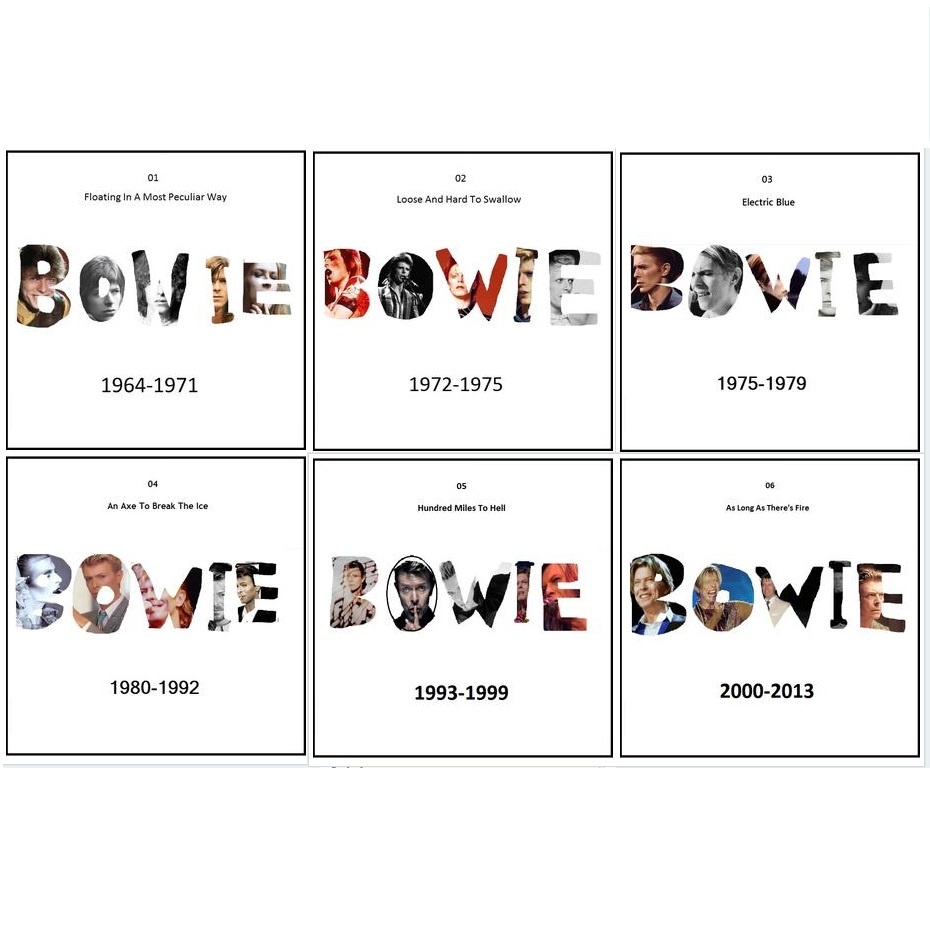 Coming to the end of our Bowie Month on God Is In The TV. Read more articles from our Bowie celebration HERE.

People who know me well will probably be aware of my fondness for making compilations and mixtapes. You may also know that I am a huge fan of David Bowie. A while ago I published an article called What Bowie Means To Me, which you can read HERE. In the article, as well as worshipping at the altar of my idol, I explained how all the many ‘Best Of’ collections sound hugely incomplete in the context of his diverse and prolific career.

So as we continue to bathe in the glory of his new LP, it’s also a good time to revisit his glorious and world-changing past. Now I reveal my own carefully chosen SIX PART Bowie compilation.

You can listen to all six parts of my compilation below via the Mixcloud players. Enjoy. 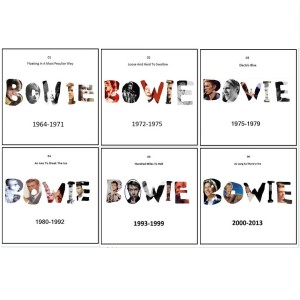 We start with the early work, which is often overlooked. But it’s usually overlooked for a reason: the man hadn’t yet discovered his own voice, and the quality of his pre-‘Space Oddity’ material mostly paled compared to his later work.

First up is 1964′s ‘Liza Jane’ which marks Bowie’s first ever appearance on record, under the name Davie Jones with the King Bees. The Rolling Stones were shaking things up at the time, and it’s clear to see that a 17 year old David Jones wanted a piece of that action, creating a raw RnB infused adaptation of an old rockabilly number. A year later, and after releasing a flop single with The Manish Boys, he returns as David Bowie And The Lower Third with a Who-esque single ‘You’ve Got A Habit Of Leaving’, which proved as unsuccessful as his early works. 1966 saw the first single credited solely to ‘David Bowie’ in the form of ‘Do Anything You Say’. But I’m going to go for its B Side ‘Good Morning Girl’, an intriguing oddity with an upbeat be bop rhythm. The scat singing in particular is most uncharacteristic of Bowie’s familiar style.

Bowie’s self titled debut album was released in 1967 and displayed something of an identity crisis. His manager Ken Pitt was keen to mould Bowie into a Tommy Steele-esque all round entertainer, but the songs also mixed the theatrical style of Anthony Newley and the 60′s pop sounds of The Kinks. But more interestingly, the album contains brief hints of topics that were to become familiar Bowie subjects in years to come: ‘We Are Hungry Men’ imagined a world where the population turns to cannibalism, ‘There Is A Happy Land’ played with the idea that children were existing in some sort of separate society from adults, and my choice pick ‘She’s Got Medals’ addresses gender bending. Despite its quaint charm, the album is too poor to be considered a “proper” Bowie record. Driven by acoustic guitar and recorded in the wake of the debut album’s commercial failure, ‘Let Me Sleep Beside You’ was the first track he created with Tony Visconti on production duties. It was recorded as a proposed single, but it was rejected by Deram and didn’t see the light of day until it appeared on a 1970 compilation.

1969′s ‘Space Oddity’ is where the familiar story begins. The accompanying album of the same name was definitely an improvement on the 1967 debut, moving into folk territory and displaying Bowie’s newfound gift for progressive songwriting. But sometimes it can be a bit over-complicated, and at times the tunes just aren’t strong enough. I’ve picked the classic title track, and the stunning ‘Memory Of A Free Festival’, which celebrates as well as encapsulates the author’s disillusionment with flower power and the peace and love generation. Next was 1970′s ‘The Man Who Sold The World’, an album which pretty much invented the term ‘glam rock’. The riffs were harder, the choruses more infectious, and the lyrics seemed to take a darker and noticeably introspective turn. I’ve chosen the LP’s magnificent opener ‘Width Of A Circle’, the enjoyable breeze of ‘Black Country Rock’, and the classic title track. 1971′s ‘Hunky Dory’ is often regarded as Bowie’s first classic album, and what a record it is. The incredible ‘Life On Mars’ was recently voted the UK’s favourite song of all time, and ‘Queen Bitch’ feeds off of The Velvet Underground to create what a lot of people consider to be the first ever appearance of Ziggy Stardust. Closing the album, ‘The Bewlay Brothers’ combined sweeping melodrama and (some say) lyrics about David’s schizophrenic half-brother, Terry. ‘Hunky Dory’ was one hell of an album, and Bowie’s next LP was to make him an eternal legend…

Floating In A Most Peculiar Way: Bowie 1964-1971 by Mrscottcompilations on Mixcloud

‘Five Years’ is the powerful opener from the legendary 1972 LP ‘The Rise And Fall Of Ziggy Stardust And The Spiders From Mars’, quite rightly regarded as one of the finest records ever made. ‘Moonage Daydream’ is testament to this, a song that defines the word ‘electrifying’. The no-nonsense kick of ‘Suffragette City’ and melodramatic closer ‘Rock N Roll Suicide’ round off a classic selection of tracks from a solid album. 1973′s ‘Aladdin Sane’ used the glam rock sound to frame a collection of soul, jazz and doo wop influences collected from the States, its lively opener ‘Watch That Man’ a fine example. As well as the sleazy crunch of the brilliant ‘Cracked Actor’, I’ve also featured the familiar hard strutting blues of ‘The Jean Genie’. A year on he returned with the hard rocking paranoid visions of ‘Diamond Dogs’ which as well as its addictive title track, also contains the classic but conspicuously out of place ‘Rebel Rebel’. As well as these, I’ve picked the superb ‘Sweet Thing’, elegantly hinting at the soul music he’d explore future on his next effort. It’s only right to feature the full album version along with its coda ‘Candidate’ and the following reprise. Rounding off this volume of the compilation we have the joyous Philadelphia sound of ‘Young Americans’, along with the blissful ‘Win’ and the awesome ‘Fame’, a song so funky that James Brown ordered his band to deliberately imitate it for his single ‘Hot (I Need To Be Loved, Loved, Loved)’. In these four short years Bowie had already explored more styles than most artists do in their entire careers. And explore he would continue to do…

Loose and Hard To Swallow: Bowie 1972-1975 by Mrscottcompilations on Mixcloud

Part 3 is entitled Electric Blue, and is as good as any hour of music could possibly be. Kicking off with the stunning mini opus that is the title track from Station To Station, we also get two more from that incredible record before a selection of songs from the monumentally influential ‘Low’ and the remarkable ‘”Heroes”‘. Three highlights from 1979’s underrated ‘Lodger’ complete a magnificent CD profiling what is often considered as Bowie’s creative peak.

There’s only one way you can go after a creative peak, and that’s towards an artistic decline. ‘Scary Monsters’ was Bowie’s first album of the 80’s, providing more classic game-changing singles, and for 1983’s ‘Let’s Dance’ we saw the arrival of Bowie the tanned, sharp suited pop star. But as the 80’s rolled on he was becoming uninspired, releasing poor albums like the dire ‘Tonight’ and 1987’s ironically titled ‘Never Let Me Down’. Bowie himself realised that his career had reached a low, and failure made him reinvent his vision once more, which he did by forming a hard rock band called Tin Machine.

An Axe To Break The Ice: Bowie 1980-1992 by Mrscottcompilations on Mixcloud

The 90’s were a much better time for Bowie. The new bands seemed to have built their sound on his, the classic albums were being reissued, and more importantly he had regained his creative mojo. 1995’s ‘Outside’ was his finest work since the 70’s, a sprawling concept record that divided the public with a daring, experimental approach, but it was dividing the listeners that was part of the genius. This music was always going to gain a lot more than just a mediocre reaction, for sure Bowie never did “average”.

Hundred Miles To Hell: Bowie 1993-1999 by Mrscottcompilations on Mixcloud

The 2000’s were the decade that Bowie settled into his role as an elder statesman of rock, but never allowed himself to become irrelevant. Always moving forward while keeping the past in mind, he seemed to be unstoppable before a stroke in 2004 forced him to take a well-earned break. His prologued absence served to make his 2013 return one of history’s most remarkable comebacks, as ‘The Next Day’ thrilled critics and the legions of fans who made it his most successful album in many years.

As Long As There’s Fire: Bowie 2000-2013 by Mrscottcompilations on Mixcloud 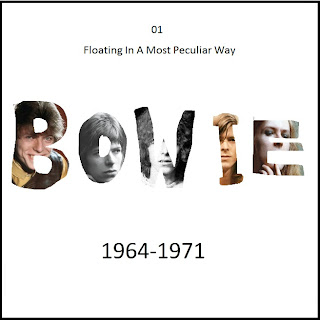 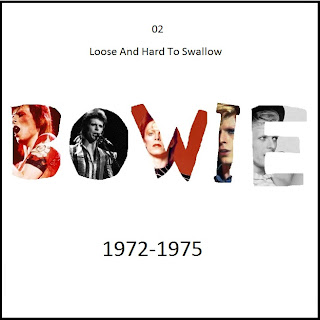 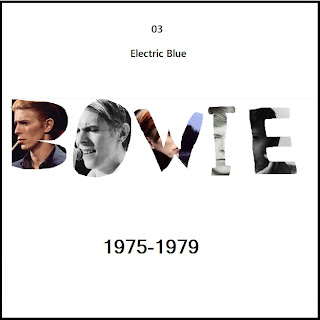 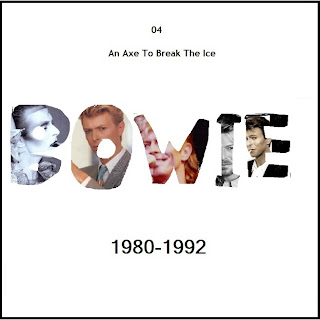 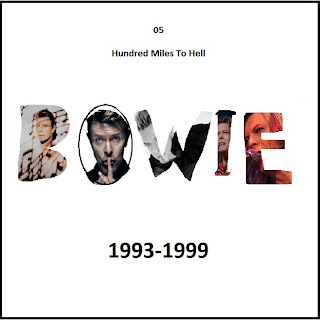 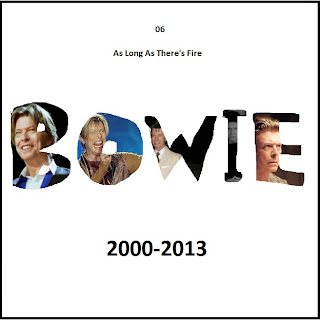