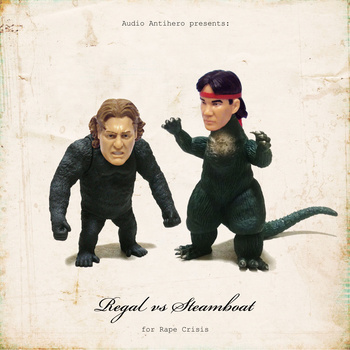 Always happy to accommodate and spread the word for the so-called ‘specialist in commercial suicide’ Audio Antihero label, GIITTV are pleased to feature their latest project, a compilation of alternative rock acolytes, gathered together to do their bit for the Rape Crisis charity.

Featuring an abundance of artful, rambunctious, whimsical, poetical and ‘avant-far’ musical treats this generous spread of 31-tracks (yes, that’s right 31 top tunes for the meagre starting price of 4 quid! Though we’d encourage you heathens to give more!!) is filled to the rafters with talent. Harboured under the Regal Vs Steamboat moniker we have both the full roster of Antihero brethren and some congruous affiliated souls from further afield; including the Flying Kites, Benjamin Shaw, Jack Hayter, Broken Shoulder, Darren Hayman (HERE)  and David Cronenberg’s Wife (that’s the band not the director’s Mrs.)

To be honest the charity label doesn’t necessarily equal quality, but in this case the Antihero team assemble a golden dawn of at least interesting if not ethereal delights: from Elizabethan folk shoegaze to industrial anguish and echo beach meets La Bamba effete pop.

Here’s the full spec and details –

“REGAL VS STEAMBOAT” is a charity double album for Rape Crisis England, Wales & Scotland from Audio Antihero Records to raise money to help them and their centers continue with their essential support for rape survivors.

The album will be available for download from Audio Antihero’s Bandcamp for a minimum donation of £3.99 with all money going to Rape Crisis England & Wales and Rape Crisis Scotland.

Over 400,000 a women are sexual abused a year in the UK, most of us will know someone who has suffered rape or sexual abuse. This compilation is meant to be enjoyed and even has a silly pro-wrestling theme but this charity work is essential. Please enjoy and please help.

Any help you could offer in spreading the word about this album and cause would be very much appreciated. The plan is to raise as much money for the charity as possible…while sharing as much beautiful and noisy music as we possibly can.

This is Audio Antihero’s third annual charity compilation, after 2011’s well received “Bob Hope would.” album for the Japan relief effort and 2012’s ”Some. Alternate. Universe” for The Foundation for the Study of Infant Deaths. It also follows other fundraisers for The Haiti Hospital Appeal, British Heart Foundation, The Pink Ribbon Foundation, New York and Shelter.