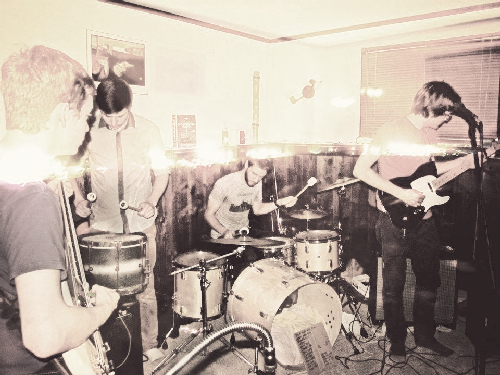 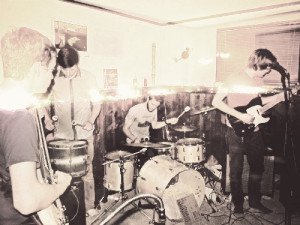 Every new generation of music has brought a different approach. The current technological state is allowing artists to be able to record instrumentally vast albums of a high quality without the need to fork out for extortionate studio time and session musician costs. As well, the decline of the record label is seeing more and more musicians take their art into their own hands, independently recording, packaging, and promoting their work. Little Kid, the brainchild of Kenny Boothby sums up this ethos selling his work, which are often seemingly defunct platforms such as cassette, via online sites such as Bandcamp. I caught up with Kenny to discuss the release of his latest album, ‘River of Blood‘, as well as exploring the importance of the internet to an independent artist such as himself.

Firstly, for those who don’t know you, can you tell us about Little Kid?
I started recording songs as Little Kid in 2009 – all four-track stuff, recorded on tape and such. It was a lot of fun for a while, but I started playing with other musicians live over the last few years and enjoyed the band sound so much that Little Kid eventually expanded into a loose band. A few other people have contributed to the album, but for the live shows it’s usually myself, Broderick Germain, and Jessiah Devine.

Your last album, Logic Songs, was quite lo-fi. In comparison, River of Blood sounds more polished. What was the difference between the recording process of both albums?
When I made Logic Songs, I didn’t really know what I was doing. I had a few odd recordings I had been making over the years and I kept recording little songs on the 4-track and some other tape machines, and eventually an album sort of took shape from that. I pieced together the best ones in an order that made sense and re-did a couple of them with different arrangements, and Logic Songs was the result. I’m happy with how it turned out – I still love lo-fi recordings – but I wanted to go about this one a little differently.

For River of Blood, I demoed all of the songs in advance, using essentially the same equipment as I used for Logic Songs. Then in January, once I felt like I finally had enough songs for a new album, Brodie and I got together at my house and started recording them. I think he did a great job on the mixing end of things – overall, I’m really happy with how this album turned out.

Logic Songs came across as a solo record while in comparison, River of Blood sounds more direct, concentrated and mature. Was there more of a band ethos behind the new record?
With Logic Songs, a lot of the recordings that made it onto the album were done the day I wrote the song – some are even the first time I really played the song all the way through. It’s a much different experience demoing each song, listening back, thinking about different arrangements, performing the songs live, tweaking lyrics, etc. There is a certain element that can be lost in that process – and I think that element is something that some people might have enjoyed about Logic Songs – but as an artist, I think you end up with something you feel a lot more satisfied with when you take the time to let the song develop over a longer period of time.

We definitely went for more of a band thing on this one. I still wrote all the songs, and I had some ideas about how the album should sound, but Brodie in particular definitely had a huge impact on the approach we took with the songs. He’s a great drummer and he has a good ear for how to really get the most out of a song. My good friend Jessiah, who plays in Wooly Mammoth, also contributed to a lot of the songs – we were hoping to have him play all the bass on the record, but it didn’t really work out, logistics-wise. On one of the few times we managed to get all three of us together, we tracked the guitar, bass, and drums of “Slow Train” live, with all of us playing in the same room. That was a lot of fun, and it wound up being one of my favourite recordings on the album.

Lyrically your new album has many religious references. It feels like within these songs, you feel like a religious failure. Would you say that was correct and lyrically, aside from religion, what are your influences?
I’d say that’s somewhat correct. As far as the guidelines set forth in the Bible go, I’d definitely be considered a failure, and probably more so now than at any other point in my life. Nowadays, I’m at a point where I am fine with that, but I find it an interesting thing to ponder, and to document in songs. I also think that the songs have been shaped by a lot of other stuff going on in my life, personal stuff that is probably only really visible to me and my closest friends.

The title of the album, ‘River of Blood’, is mentioned a few times throughout the album. What is the meaning and importance of it to you?
When writing these songs, I was thinking a lot about Jesus’ incarnation in human form and the biblical distinctions between God and man, the spirit and the flesh. I was thinking about how humans, even according to the Bible, are inherently and inevitably flawed, and how – to me at least – that would imply that not only Jesus, but the gospel and the Bible itself, are similarly flawed. I would think that even something perfect or divinely inspired, after being filtered through all that human imperfection, would end up getting at least a little fucked up. This also got me thinking about particular defects and problems in the human mind and body, things like lapses in memory, poor vision. I think that found its way into a lot of the songs.

It’s hard to pinpoint exactly what “river of blood” means to me – to be honest, it was something I just started singing one time – but it was an image I liked, and it’s come to represent a lot of the ideas I’ve discussed above. I think I use the image a little differently in each song, but it all ties into this sort of “God and man” distinction somehow.

Musically River of Blood sounds like a folk album but with rock and almost church gospel undertones. How would you describe the sound of the record?
We’ve been jokingly calling it “mid-fi post-gospel stoner-folk”. It’s definitely folk-influenced, especially in some parts, but it borrows from a lot of different sounds. I can hear elements of almost all of my favourite bands and genres in there somewhere, which is something I like about the album. I think we managed to make it pretty cohesive while still exploring some pretty disparate sounds – at least I hope so, because that’s something I really appreciate in a record.

How will you be planning to release the new album? Logic Songs was available to buy on download or cassette, will River of Blood be the same?
We started with a run of 40 cassettes (20 red / 20 gold) and 30 CDs. This tremendously talented artist who lives in my city, James Chia Han Lee (http://leeshit.tumblr.com/) created the artwork and design, and I printed and assembled all the packaging, dubbed the cassettes, etc. We have actually sold out of the CDs already – a few were preordered, but the rest sold the night of our release show. We still have some cassettes left, though. We’re planning to do vinyl but I don’t know how long it will take to get that together.

I first became aware of Little Kid through Bandcamp. As an independent artist, how important is the internet to you in terms of promotion, do you view it as a help or a hindrance?
I’m sure that, overall, the internet has mostly been pretty harmful to musicians, but for me, at this point in my career, it’s been very helpful. I’m not really interested in making a living from music right now, so I’m happy to be able to give it away to anyone who will listen – the internet makes that possible, and it’s been awesome to hear from people from other parts of the world who have somehow found my music.

With the price of (international) shipping increasing, has that had an impact on you as an artist? How difficult is it now to break even on the time and money you must put into rehearsing and recording?
It’s very difficult… I either broke even or lost money on the Logic Songs cassettes, and it’s looking to turn out approximately the same way on this record. But that’s not really a problem for me, because I make my living through my “real” job – music is a passion I pursue outside of that. We could probably charge more but I like being able to keep prices as low as possible – and it’s hard enough to convince people to buy physical media as it is.

And finally, if you had five words to sell your new album to someone who hadn’t heard it, what would they be?
“PLEASE CONSIDER LISTENING TO IT”

You can buy Little Kids new album, ‘River of Blood’ via their bandcamp – http://littlekid.bandcamp.com