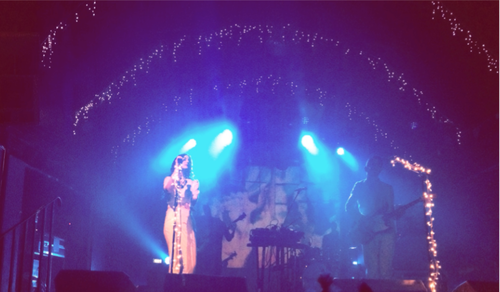 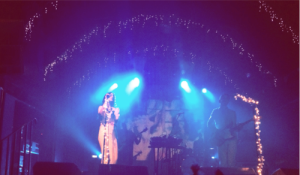 Summer Camp celebrated in style their last UK gig and biggest homecoming show in London’s Heaven. With fairy lights adorning the ceiling and mic stands, the atmosphere in the club was nothing short of Christmassy, and the crowd let out a big “ooh” once the lights were lit. Summer Camp’s Elizabeth Sankey and Jeremy Warmsley were both immaculate in their white outfits, with Sankey swaying and singing in some beautiful silver platform shoes whilst a suited up Warmsley was mostly on guitar and keyboard duties.

Starting off with the slow burner ‘The End’, the band leapt from one track to the other fluidly, with a setlist which included material from their debut ‘Welcome to Condale’ and from their homonymous second album.

The couple is a match made in Heaven: their showmanship is very well balanced, and it’s incredibly sweet to see them quarrel over nothing during their set. She has the theatricality of a 90s pop star mixed with the sultriness of Julee Cruise, whilst he has a sort of Marty McFly charm. With their brilliant lyrics about young love, doubt and naïve uncertainty, all set to a back drop of a light pop mix, and the screen projection of classic dance and school scenes from iconic movies (anything from ‘Footloose’ to ‘Billy Elliot’, ‘Mean Girls’ to The ‘Virgin Suicides’), they are truly entrancing. People were throwing shapes, flailing their arms in the air and joyously clapping along tracks such as ‘Ghost Train’ and ‘Fresh’.

The rhythm section was brought by William Bowerman and Nathan Fairweather, two thirds of the portentous band Brontide, bringing to Summer Camp’s live presence an even stronger and more articulate depth. With highlights which include the whitest yet most charming rendition of Biz Markie‘s ‘Just a Friend’ which in turn interpolates the band’s own ‘Losing My Mind’, and a sneak peak to a Phil Spector-esque soundtrack made for the upcoming movie ‘Beyond Clueless’, Summer Camp are now set to go and conquer Europe.