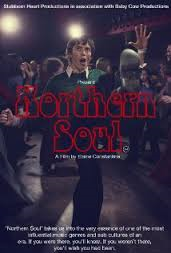 Northern Soul, the debut film written and directed by Elaine Constantine is a gripping, uncompromising look at the fabled Northern Soul scene of the 1970s. It’s about not wanting to rot away in a dead-end job after school, living for the weekend and attempting to make your dreams reality. The film is unflinching in its depiction of sex and drugs and music, and also about wanting to succeed and belong – on your own terms, of course.

Sure there have been films before in this vein – and parallels could most certainly be drawn with both Quadrophenia, and, to a lesser extent, Withnail and I. Perhaps there are similarities with Saurday Night Fever too – (although that was set in the then-present day, rather than made decades later.) Whilst I wasn’t even born at the time the film was set, certainly it seems authentic, without being hung-up on period detail. Doubtless column inches can be filled by people who claim to have been there and challenging everyone else’s version of the facts. I’d like to just get on with enjoying the film

Why was it Northern Soul? Well, the emphasis is more on the Northern than the soul. The soul was a) black b) American c) upbeat and energetic and d) the more obscure the better (Motown was regarded as being way too commercial(ly successful – there is something to be said that in many ways the Northern Soul fans were even more elitist than any indie kid could ever be). Though the film doesn’t mention it, the term Northern Soul came into being from London record shops who used it to distinguish it from the soul and funk of the period that was being made in America. Northern Soul clubs were certainly not interested in playing music from the early seventies that was coming from the likes of Stevie Wonder, Isaac Hayes, Curtis Mayfield or Marvin Gaye. It was music that had been mostly recorded in the 1960s and released in tiny quantities in America. Northern Soul DJs jealously protected what they had and played, infamously going as far to tippex out the information on the singles they owned so that rival DJs would find it near-impossible to track it down. In a pre-internet era, with no search engines – never mind the likes of Shazam, this made it even more of a challenge. There’s a wonderful scene where Elliott James Langridge as John and Joshua Whitehouse as his mate Matt realise that they have indeed managed to identify and track down a record that the DJ at the Wigan Casino – the Mecca of Northern Soul fans – has been playing.

There are of course, human obsessions – love and friendship, that very British obsession – class -that make up the film. It’s obviously not the first time that these themes have been looked at – but it’s all the more credit that themes that could be translated to many times and places feel so fresh and specific here.

What is exciting about Ms Constantine’s style is that it doesn’t feel overly glossy. That’s not to say it feels unfinished or unprofessional – it most certainly doesn’t! – but that it feels real. And that greatly befits the narrative and the historical setting.

If justice is done, not only will this serve as a springboard for Ms. Constantine’s directing career, but also set Elliott James Langridge, Joshua Whitehouse and Antonia Thomas on the road to serious stardom. While it may be obvious, this film deserves to be filed alongside the likes of 24 Hour Party People and Quadrophenia for its depiction of a particular place and time in British pop culture.

…and it goes without saying that the soundtrack is utterly brilliant.