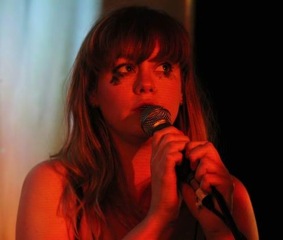 Last year, Becky Becky released their album ‘Good Morning, Midnight’. At the time I wrote that it was one of the most compelling albums that I had heard, and I’m happy to stick to my guns. I wasn’t alone, there was plenty more critical acclaim for the ‘shouldn’t work but OMFG it’s brilliant‘ clash of belle epoque consumptive glamour and pounding nu-disco.
The bitter-sweet element came in the form of tales that Gemma ‘Woodpecker’ Williams and ex-Fence man Peter Mason had enjoyed an ‘interesting’ time making the record, so ‘interesting’ in fact that I really never thought we’d see it performed live. I’m proved wrong here twice over.

Firstly, they did indeed perform it in all it’s kitsch drama. The performance managed to get itself recorded and is about to be released as a live album on February 9th on Feint Records via beckybecky.com.  Those who already own the original ‘Good Morning, Midnight’ will be able to claim the live version for free via an e-mailed download code, which is a nice touch.

The second piece of excellent news is that they’re touring the damn thing, if you can call four dates ‘touring’. Playing selected dates then:
07.02 – The Martha Gunn, Brighton
11.02- The Windmill, Brixton, London
05.03- Edinburgh, tbc
16.04 – London, tbc

Here’s ‘Mask’. I wouldn’t be surprised to see more of these surface around the release date