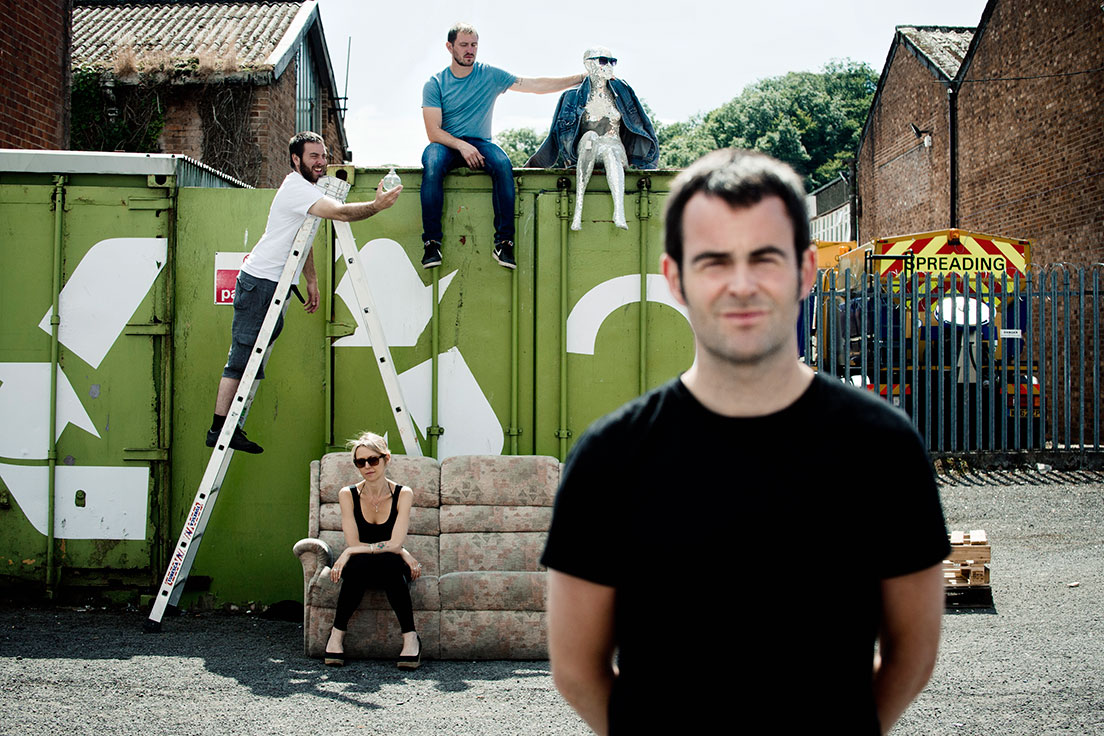 There’s something discomforting about a front who can snap straight into his act, something ingenuine about a musician posturing like a switch flicked in front of an empty venue.  With the band WªLL, the gangly young frontman shuffled awkwardly towards the mic and peering across the audience – few and all giving the stage a wide berth – looked set to launch a mopey shoegaze set, only to lurch into a spasmolytic, screeching performance at the drop of the first note.  But ingenuity is the theme of Future of the Left’s show at Clwb Ifor Bach, opening the year with these incomprehensible post punks – a, ha, wall of shrieks, driving bass and tricky guitar riffs crossing through each offshoot of punk; and definitely punk, but where WªLL is taking it remains obscured.

Egged on by the space and mopey thudding of his companions, the frontman chucked himself onto the floor and writhed around in unrestrained – stiflingly calculated – throes at the feet of the few audience members game to come close. There were three.  This self-violence gave face to a jagged scowl, propped up in flannel as he picked out claustrophobic circles, his dress shoes held together with duct tape.  The band, for the most part, ignored him, sulking on stage over a swamp of sound, their companion’s screams sucked into the murk and indecipherable.  These kids are ingenuine and in their ingenuity, ingenious and genuine, and rightly praised for it.

Ingenuity is mentioned in regards especially to the second act, The St. Pierre Snake Invasion, though this is a contentious issue: the venue packed out as they took the stage.  The frontman, Damien Sayell, a charismatic wall of muscle with a mane of red hair and vaguely zen-themed tattoos, immediately took down the microphone to plant it amid the crowd, the band’s promotional materials promising “colourful language, bodily fluids and the ritual humiliation of audience members”; the front row was right to be wary.  Sayell took to pacing in circles as he warmed up to performance, and each circle came just that tiny bit too close – that dominance dialogue, asserting his position.

Give them this: they got people to dance, a feat in Cardiff.  The crowd love St. Pierre Snake Invasion, parading songs like ‘The Great Procrastinator’, ‘Jesus Mary Joseph Talbot’, and ‘Braindead’, all of which are the definition of post hardcore given the cock rock treatment: big, dumb and loud.  Sayell continued to pose – his voice and presence are powerful – and circle over the crowd, but coming to their “ritual humiliation of audience members” act, ‘Hey Kids! Do The Choke Stroke’ – about Michael Hutchence’s alleged death by autoerotic asphyxiation – he picked an unwilling participant and was defensively thrown off.  His act fell flat into vague gestured apologies after attempting to wind the microphone cord around the throat of the unconsenting audience member, unceremoniously retracted.  Showmanship aside, you must be able to gauge your crowd to pull off these theatrics, and the challenge of approaching the one person not engaging was a risky move for Sayell. This time, it let him down.

Punk gigs by nature attract a mixed crowd.  The music is an expression of aggression, and that attracts two main groups of people: small-framed outcasts who harbour private, inward hostility, and the physically dominant expressing hostility outwardly, the initiators of moshpits, the louts, the thugs, the masculine energies who ultimately chewed up and swallowed punk rock for its minority originators.  With their humour and hands-on shows, tonight playing to the home crowd, Future Of The Left were bound to attract a throng of both.  In the five minutes of set up I enjoyed one of the latter (who will later be launched off the stage to an unsympathetic audience) resting his head on my shoulder to read my phone screen in my hand (shooed off with a “What the FUCK man?!”) and moments later his breath blown on the back of my neck from where he’d been shuffled back in the crowd, putting on an innocent face when I turned around.

And I can complain and complain – the lout easily three times my size who grabbed my wrist so tight he left cuts bleeding down my hand where his nails dug into my skin, the entire cup of Peroni poured down the back of my top – yet still stand here and say ‘gig of the year’.  Future Of The Left delivered.  Their setlist was scattered across the decade they’ve been active opening with ‘Kept By Bees’ and ‘Lord Hates A Coward’ and flushing into ‘Small Bones Small Bodies’ and contemporary ‘Bread, Cheese, Bow and Arrow’ with seamless grace and but a sneer from the infamously sharp-tongued lead Andy ‘Falco’ Falkous.  Greeting and banter were civil with each song sharp and punctual; a band so well-rehearsed, so to the book, that it becomes obsessive, a razor-edged accuracy.  The lout element of the crowd soon heckled the easily-baited Falkous into banter over “fuck Nigel Farage!”  Swallowing a grin like a mongoose happening upon an unguarded pheasant’s nest, he shot back: “But the hazard in fucking Nigel Farage is he might orgasm, he might obtain pleasure from it!  And we don’t want that…”

Pack down ‘Johnny Borrell Afterlife’, ‘Beneath The Waves An Ocean’, and ‘Manchasm’ with the trademark Juno-60 broken out under Falkous’ and bassist Julia Ruzicka’s fleet fingers.  Another exchange:

“I’m concerned by your obsession with sexual violence.  ‘Sexual violence rarely solves anything,’ my mother always said.  Wise words from a wise woman. ”

Another grin splitting through the cynical countenance. “ Well, if anyone is looking for sexual violence, this man is happy to help.  And speaking of sexual violence!”

And a seamless segue into ‘You Need Satan More Than He Needs You’, a grunting, awkward ode to a Satanic orgy ruined by the weather.  A Future Of The Left set hurtles on, not with fear or boredom, but rather urgency: a lot to say and a limited time to say it, delivered so fast the subtleties of their humour and sentimentality tends to become scattered across the dance floor.  A smirking cover of mclusky’s ‘No Covers’, a brief exchange in which drummer Jack Egglestone sells a beer from behind his kit to guitarist Jimmy Watkins, a missed cue ignored; still Falkous will take the time in an introduction to set distortion just right, to change the mix, levels, foldback, shooting keen glances over the audience’s heads to the sound crew.  Watkins entered the crowd, enveloped, flicked one kid in the head, offered a mic to another.  Falkous and Ruzicka prefer to take a less hands-on approach, keeping their distance; but closing in on a final medley of longer, less structured songs – ‘French Lessons’, ‘Lapsed Catholics’ and ‘Singing Of The Bonesaws’ for a few – Falkous’ comparatively petite form was eclipsed by the shadow of a large, very drunk mosher who climbed onto the edge of the stage, spreading his arms out as though to embrace Falkous, basking in the stage lights.  The mixed ploy of uncertainty, disbelief and amusement in Falkous’ grin could have been spread on toast.

“This is beautiful,” he remarked, snide, “Really beautiful. But we’re going to have to make it somehow less beautiful.”  No reaction.  The man continued to bask.

“Come on now.  Come on.”  Coaxing had no effect, the audience giggling under his berth.  “I love you,” blurts the man.

“No, you love an idea of me.  And I’m sorry it has to end this way.  But someone get this bastard down so we can finish the show, eh?”

The man gracefully launched into the crowd which gleefully parted for him; it’s doubtful more than three pairs of hands caught any part of him.  The medley played off before descending into a calculated chaos as Watkins passed his instrument to an audience member and Falkous began steadily dismantling the kit beneath Egglestone’s drum line.  Sticks were distributed among the crowd, at mechanical pace each skin and cymbal is being pounded by a different person. Falkous turned all his pedals on and rubbed his guitar against a tom.  Ruzicka entered the crowd.  Watkins passed around a mic to incomprehensible howls.  The cacophony has no structure.  No swell.  Just thudding, screeching, then abatement – a slow beat on a single hi-hat, random bass notes.  Then silence.  Julia and Jimmy will be selling t-shirts and records at the back stall, thank you everyone, and goodnight.

Post-script: Following the publication of this article, Damien Sayell contacted us to clarify the situation:

“Thanks, but just to be very clear, I did not try to put a cable around someone’s throat. At that point in the song I usually put the mic down and have a dance, I went to give the microphone to the person at the front and through what I thought was shyness declined to take it. I tried to rest it around their shoulders much like I did to person afterwards and obviously they weren’t at all happy with that. […] In hindsight I can see exactly why you thought that I was trying to simulate hanging. Terrible, terrible timing on my part. […] I’d just be mortified if people read this review and concluded that I was some kind of GG Allin cunt. A cunt, perhaps yes. Almost certainly. A GG Allin cunt, I’d hope not.”