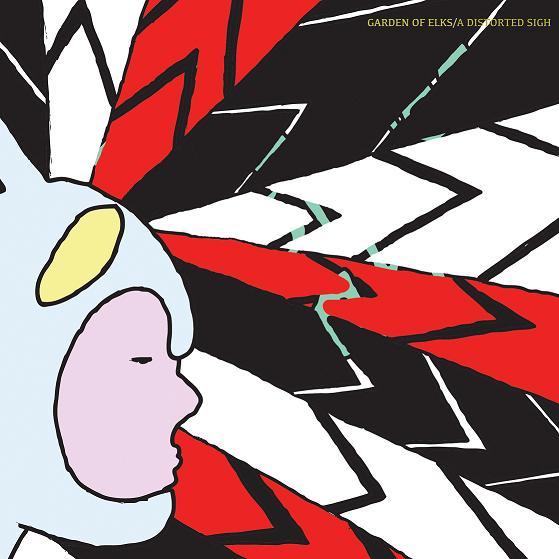 An unusual band name; a personal throwback to my more youthful days of living in Canada, and a particular incident of travelling buddies running away from an elk that we caught stagnant on the road, under the false assumption that this was protocol for such an encounter. However, it is not only the name that throws me back to an earlier life; there are definitely elements of Sonic Youth, Pavement and Pixies in there, too. This is a band that is nostalgically looking back to a more youthful era, evidenced by their thrashing guitar riffs and extensive vocals which begin the album with ‘This Morning We Are Astronauts’ and the lyric, “haven’t we lived this dream before.”

Boasting members from a plethora of bands from Scotland’s indie music arena – namely PAWS, Lady North and Bronto Skylift – and with an American 90s indie rock sound which threads its way from ‘This Morning We Are Astronauts’ right through to ‘Tomorrow’, Garden of Elks’ A Distorted Sigh feels far from being a debut album.

The album, which has a pacey feel to it, is composed of short, snappy tracks full of out of kilter guitar, bass drum and an element of discord which keeps it interesting, but also tends to pre-date it. New track ‘Swap’, with its changing tempo, constant bass drum and frictional vocals which creates an almost translucent sound. However, there are moments where the tracks makes the hairs on the back of my neck stand on end, in the same way that nails against a blackboard do. It does not make for easy listening and for the most part feels like a hurried album which, had it been given a little extra time, could have been much more refined, instead of a band who seem to be rushing from start to finish.

In fact, most of this album has this effect, all of which makes for rather uncomfortable listening. The tempo of guitar and drums throughout suggest that the album will finish soon enough, and this hurried sound is particularly evident on tracks like ‘I Hid Inside’ and ‘Smile’.

Incorporating a rather clunky sounding guitar, intense drumming and dissonance, this album is not quite there for Garden of Elks. It does regurgitate the sounds of the nineties, and the band have yet to find one of their own which is perhaps something they will do with albums to come. Unfortunately A Distorted Sigh is not far removed from its title. It is an album of short, thrashy, pop sounds that come across as being just a little too quick but with a nod to the grunge era of our youth.