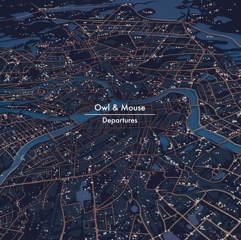 You would be forgiven, at the start of ‘Departures’, for thinking that Vangelis has decided it would be a great idea to form a Young Marble Giants tribute band, but with Harriet Wheeler of The Sundays on vocal duties instead. Such is the stark minimalism of ‘Keep Your Eyes Open Wide’, though this is far from representative of most of the album here, which, in a nutshell, is mainly the kind of lo-fi indiefolk that made up much of Noah and The Whale‘s earliest output.

Of course, it is the dulcet tones of Hannah Botting that we are actually observing, a seductively alluring voice that is hard to resist. It feels rather like she is licking your skin at times, not an unappealing proposition, granted, though Botting likes to keep an air of mystique about her, so never really goes much further than nibbling your kneecaps or at least tickling them with a feather from her pillow. Which, incidentally, will almost certainly be pink and fluffy with pictures of ponies on it.

Tom Wade joins in with proceedings on ‘Worst Kiss’ (vocals, I mean, not licking or tickling – that would just be weird) and it’s all very effective, with Wade coming across in a similar vein to Balthazar‘s Maarten Devoldere, and then later overlapping Botting on the magnificently brooding ‘Basic Economics‘, which is probably the best track here. “It’s all going to depend on supply and demand“, elicits Botting, before continuing “You might get what you want, but it won’t be what you planned“. She’s wrong though, because I wanted a falafel wrap, and I got EXACTLY what I planned.

Elsewhere, there are nods to Hank Marvin at the start of the title track, which shortly becomes a cross between ‘Ladykillers‘ era Lush and the big stage musicals of the 1970s. Or there’s ‘Octopi‘, sounding rather like Kate Nash in places and returning to the theme of leaving that runs consistently throughout. Well, it IS called ‘Departures‘ after all.

I know I called this ‘indiefolk’ earlier on in this review but it’s not all ‘Hey nonny nonny’ and ‘Fare thee well my pretty little maiden’ type stuff; far from it, in fact. This is perfectly showcased by the Leonard Cohen tinged ‘Sinking Song’, which, fronted by Wade, is what I suspect the eighty year old Canadian would sound like if he clubbed Mark Eitzel over the head and took over American Music Club.

Dan Mayfield’s ukulele is the glue that holds the basic frame together, but it’s Hannah who keeps the engine purring. This is lovely stuff.