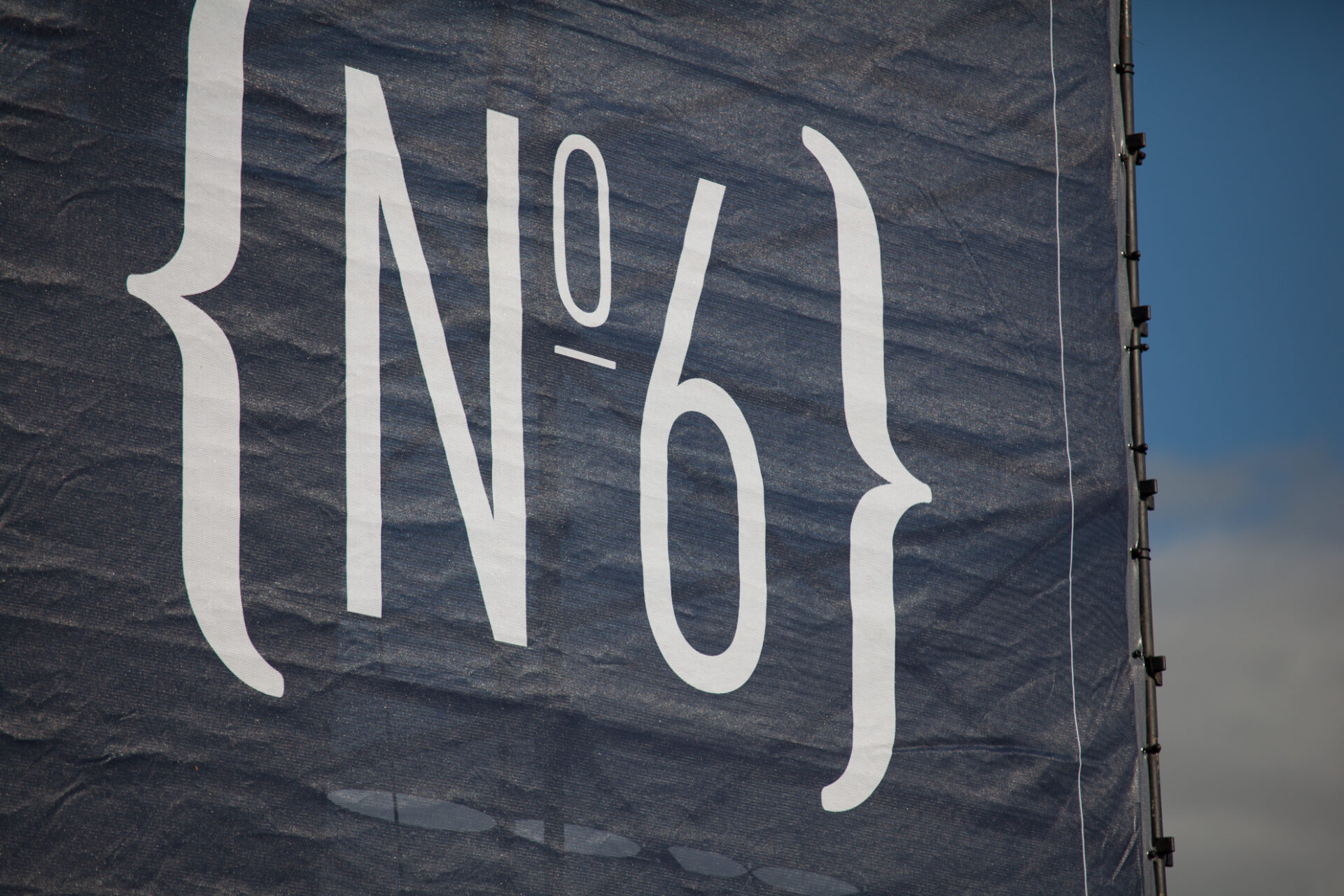 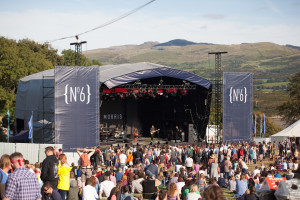 Festival No.6 is one of the most daringly ambitious projects. The site is small and not easily accessible; nor is it easily walkable given the hilly terrain of the area. The festival is 100% linked to its location, in terms of its name referencing ’60s cult TV series filmed there and the theatrical un-real backdrop of the grand postmodern folly of Portmeirion. Coming into being only four years ago, it is a precocious upstart in the already flooded boutique festival market; but it’s done well to not just stay afloat but to gain a reputation as one of the most imaginative summer season events. Yet, for every glorious press or fan account there have always been plenty of stories of logistical nightmares and less than positive artist reports. Three years of conflicting stories and, finally, this year my curiosity, coupled with a promise of a convincing line up, got the better of me. It was time to set sail for North Wales and see for myself.

Douglas fir, cedar, giant redwood, Japanese redwood… Beach combing and woodland walks are all part of the No.6 programme. You’re not likely to find another festival where you can learn so much about nature: rhododendrons don’t allow any undergrowth, western cedar smells like apples, Scots pine is the only native British pine…

Aside from the mesmerising natural setting of the estuary of the river Dwyryd, the tides, the wooded hills and the distant sea, Portmeirion village is itself a unique space. It is an odd and somewhat indulgent fantasy, an Italian folly in North Wales that inspired numerous creative minds and made many TV and film appearances. 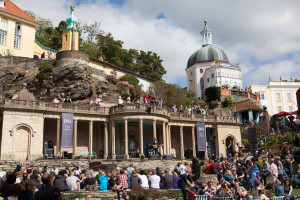 But being a full-blooded boutique festival, No.6 is all about the experience rather than the line up. Firstly, it programmes a lot of extra curricular stuff, from Q&As to film screenings, classes, walks, dinners, parades and craft sessions. At times it felt that many of such happenings were attracting bigger crowds than even some of the more familiar music names. Small area around the Estuary Stage was filled to the brim with fans of Britain’s favourite drug smuggler and cannabis campaigner Howard Marks. He looked very ill but spoke with humour and honesty about his cancer, his political beliefs and about resisting the temptation to watch Breaking Bad.  Steve Coogan got an equally enthusiastic reception at his stage interview with the co-writer of his autobiography Amy Raphael.  John Niven’s panel talk, accompanied by a sneak preview clips of Kill Your Friends, attracted a huge crowd, with many people struggling to get inside the tent. Long table banquets appeared to be equally popular and there was a procession of some sort every time I passed through the Village.

As far as music was concerned, there were definitely some incredible performances and rare appearances. On Friday night Metronomy clearly lived up to their headliner status with a funky set culminating in the crowd singalong of ‘Love Letters’. Despite the lack of any traditional greenery and animal mascots, British Sea Power played a tight set packed with familiar tunes, from ‘Machineries of Joy’ to ‘All in It’. Everything Everything had an even bigger audience, clearly marking their shift towards more mainstream popularity. Finally, Grace Jones’ commanding personality made for a memorable closing gig for the crowd, mesmerised by her flamboyant gravitas and ageless stamina. “My name’s Jones so I must have a little bit of Welsh in me,” she declared at the start of her set. “Coming here I thought I was in Jamaica.” Her joke reminding the audience of the fantasy character of Portmeirion. “Until I got out of the fucking car. It could be a few degrees warmer.” Well, you can’t have everything. 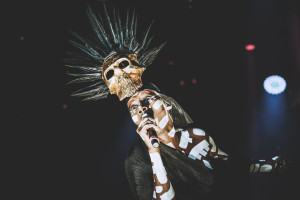 Despite occasionally scarce audiences, there was a lot of new music, with more than a hint of Welsh presence as well. Friday afternoon Snw Festival-curated line up featured anti-genre hero Titus Monk, whose ‘bad ass’ orchestrations leapt from jazzy Sun Ra wig-outs to bluesy West coast sounds and theramin-infused brass numbers. Andy Votel‘s Finder Keepers label took over the reins of the Clough Stage on Saturday with a plethora of exotic talent, from the GIITTV favourites The Lovely Eggs to the recent Welsh Music Prize nominee Tender Prey and tropical psychedelic jazz funksters Fumaca Preta.

On Sunday, the biggest treat of the day was a Caught By The River line up that included flamboyant baroque pop maestro and former Racehorses’ frontman Meilyr Jones, Cate Le Bon and Tim Presley‘s new collaboration DRINKS, and another Welsh Music Prize nominee Gwenno.

The £20 weekend parking fee could only possibly be explained by the unimaginable beauty of the Park and Ride scenery surrounded by mountains and woods. And although shuttle buses ferrying excited festival mob to the site 4 miles away were quick and efficient, not having 24/7 access to your car made things less practical.

The peculiar IKEA-style trail across the site was enforced by security staff who ranged from joyfully incompetent to argumentative, rude and lacking the most basic customer service skills. At times you could pretty much gatecrash any party and walk in free anywhere on site. Then, completely randomly, this situation would turn 180 degree to a display of hostile searches and entirely unnecessary insistence on redirecting people to take more convoluted routes for no apparent reason.

As is with any festival, bar services is another critical factor of the event’s overall success or failure. To give it credit, No.6 bars were plentiful and most of the time it was possible to get a drink in no time at all. The issue was more to do with prices and the heavy presence of corporate sponsors. Estrella is a fine drink but at £5 a pint? Really? Don’t get me wrong, there was some variety but variety was equally pricey.

Food is undoubtedly one of the key features of No.6. There was plenty of choice and the quality was head-and-shoulders above pretty much every other festival I’ve been to this year. However, my concern was that not everyone would be prepared to shell out £9 for fish’n’chips.

Although this was my first No.6 visit, I was aware of the increase in their capacity in 2015. There were definitely a few bottleneck situations around the Portmeirion Village and the Estuary stage. It may not have been the worst part of the experience but it certainly got a number of negative comments from those who had experienced the festival previously. Nobody likes the stress of overcrowded places, queueing and not being able to move, especially when you pay nearly £200 (incl. booking fee) for the privilege.

For reasons most likely to be linked to licensing and live curfew times, No.6 offered little in a way of late night entertainment. Once the curtain fell on the main stage headliner, there was not a lot to choose from elsewhere. No provocative late night cinema, no bars open till the morning, no small stage live music. In fact, everyone was moved from the Portmeirion Village earlier in the evening and at night the rest of the site drifted towards either the main arena arena, with Castelle bar packed to the gills. In short, very often it felt too much like being herded around the place. After all, “I’m not a number. I’m a person.”

Only a few minutes’ drive away from the festival site is Porthmadog, a coastal predominantly Welsh-speaking town; pebbledash houses and cheap hotels for Snowdonia-bound tourists. A quick look would leave you in no doubt that this is a place where organic locally sourced produce is probably not the key priority. Being an extravagant folly Portmeirion doesn’t really belong in Wales, or anywhere else. Time and place are irrelevant here. And it is possibly something to do with this odd juxtaposition of the imagined and the real world that made it all feel very odd. Most of all, those bilingual signs and Welsh language taster sessions presumably aimed to fill the gap in-between your yoga class and your bespoke long-table banquet.

Sitting down for a drink on my first day I overheard a happy ironic voice, “This is the best middle class festival I’ve ever been to!” He wasn’t wrong but it didn’t feel particularly funny. Someone later mentioned that No.6 won a Radio 4 vote for best street food. Well, most likely…My tent neighbours lost their pomegranates and clearly found the situation rather distressing. 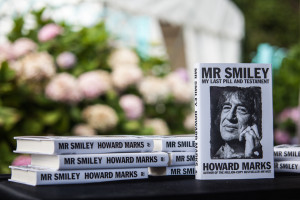 Then again, I should have known better when words like salon were used to describe a line up and the festival made a point of announcing their chefs. It was all clear what from the start. Amongst this cornucopia of middle class joys there also appeared a disproportionate number of loud slightly obnoxious fancy dress wearers as well as people wielding selfie sticks. At the end of Howard Mark’s talk a man passed a spliff, lit it and proceeded to get a selfie with Mr Smiley. Nice. Or perhaps not.

So was it “a festival unlike any other, in a place like no other”? The place most certainly is inextricably linked to the festival. It is a festival that can’t possibly move or expand any further because of its location. It trades on the Prisoner theme and relishes its fairy tale setting. For all its worth, Portmeirion is the real star and a place well worth a visit.

As for the unique nature of the festival, it fits in neatly into the Wilderness/Port Eliot niche of high end boutique events. It is perhaps more music oriented than Port Eliot and less expensive than Wilderness but it definitely aims for that market. If you want a festival for music lovers, than End of the Road and Green Man are much better options; and you’ll have a lot of more beer money as well as more subversive entertainment at both events. If banquets, crafts and TV celebrities are more appealing then No.6 is definitely a great choice. As they say, horses for courses. Each to their own.