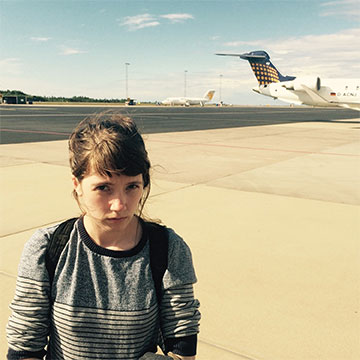 Pop punkers Martha return with their second album Blisters In The Pit Of My Heart this summer, via Fortuna POP! (UK/EU) and Dirtnap Records (US). Produced by MJ from the awesome Hookworms, this sophomore album touches upon relationship awkwardness, the pains of being single and in love with someone whom may not reciprocate said feelings. Hailing from the gloriously named village of Pity Me in Durham, this four piece comprising of J. Cairns (guitar),Daniel Ellis (guitar), Naomi Griffin (bass), and Nathan Stephens Griffin (drums) were surely pre-destined to produce high octane, 100mph, angst propelled power pop punk. Am I right? If not, then their output is a massive coincidence.

First track ‘Christine’ has a great bombastic start, full of noise and strained vocals. These vocals start to get shared between Naomi and the rest of the band and this is when the brilliant harmonies start to kick in. Combined with the love song subject matter this really is a 1.57 album start of pure joy. The brilliantly titled ‘Checkov’s Hangnail’ follows very quickly with its fast and furious riffage right from the opening bars. The playful lyricism that this band are known for really starts to come into the fore here. The refrain of “when it rains, it really fucking pours” and singing about missing metaphors is just clever songwriting.

‘Precarious (The supermarket Song)’ opens with another great guitar hook and Naomi’s lead vocals lend this tune a really lovely Kirsty McCall (RIP) feel. What you also get are echoes of early Lemonheads when Julian Hatfield added that extra vocal dimension. ‘Do whatever’ again has Naomi leading the vocals in this cheeky, letchy blast of pop punk with the refrain of “then you had to go and spoil it it in the gender neutral toilet”. Bloody brilliant stuff.

This cheeky and playful lyricism continues with ‘Goldman’s Detective Agency’ and ‘The awkward ones’. And the bands reluctance to shy away and positively embrace their regional accents really adds something special to these infectious, upbeat and catchy songs. Their delivery conjures up the intensity and playfulness of Paul Smith’s vocals on Maximo Park‘s output. Nice.

‘Icecream and sunscreen’ is 2.26 of melodic, schizophrenic and spasmodic pop. Starting off slow with the backing music initially running backwards and then the guitars and melodies start and create a beautiful laid back song about summer love, regret, and watching the skin peeling off a loved one’s sun burnt shoulders. This alone would have been lovely enough. But suddenly, and without warning, it explodes into a wondrous pop punk dirge with lovely harmonies and great vocal interplay between the band members. 100mph yes, but with romantic and playful lyrics.

The intriguingly titled ’11_45, legless in Brandon’ is just a full on big sound, punk pop classic that leads quickly on the brilliantly titled ’Curly and Raquel’. Now, no one could ever accuse this band of not having a sense of humor when it comes to the ideas behind the songs on this LP. Along with a sense of humor, comes a sense of tragedy not seen since Romeo and Juliet with this song of young love and awkwardness set against the canvas of such unrequited, and ultimately, doomed love that was Coronation Street‘s Curly and Raquel. It’s a great big song complete with harmonies and heartfelt playful lyricism. Gorgeous.

Completing the LP we have the ingeniously titled ‘St Paul’s (Westerberg Comprehensive) that as well as being another take on teenage angst, quiet guitars and brilliant lyricism and playfulness, is really a big sign as to where this band is coming from. The Replacements influences are all over this LP, but taking nothing away, this is a very accomplished album and the band just seems to be having so much fun. And this really comes across in these 11 tracks. Well done Martha!

New album Blisters In The Pit Of My Heart out Friday 8th July on Fortuna POP!