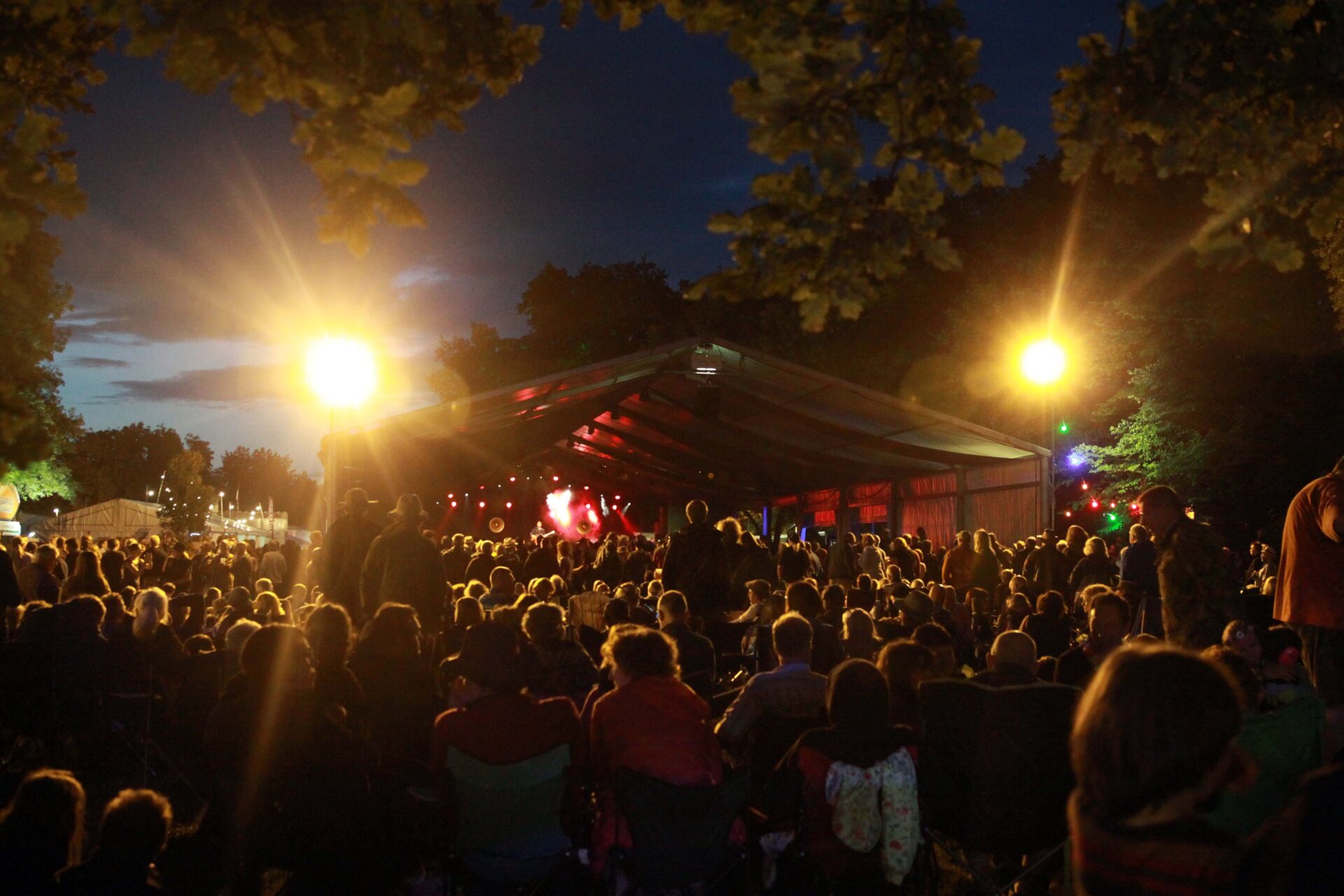 Held every single year since 1965, the Cambridge Folk Festival has rightly earned itself a reputation as being one of the longest running and most illustrious folk festivals in the world today. Its longevity is matched by an enduring popularity. This year’s festival again sold out weeks in advance for what was the 23rd consecutive time. Fourteen thousand people once more were drawn to the beautiful surroundings of Cherry Hinton Hall and the lure of a four-day event that promised some of the very best performers from a folk idiom that over the festival’s long history has slowly stretched to include elements of country, gospel, blues, roots, rockabilly and world music.

Some of Cambridge Folk Festival’s perennial faithful may well have arched a purist eyebrow or two at the inclusion of KT Tunstall’s unashamed indie-pop stylings – her cover of The Bangles’ ‘Walk Like An Egyptian’ felt decidedly out of place on Friday night – and the gypsy punk mayhem of Gogol Bordello on what has clearly become a boundary-expanding bill. But the festival’s continuing success does owe much to its unerring ability to continually reinvent tradition whilst still remaining true to the central tenet of folk art. 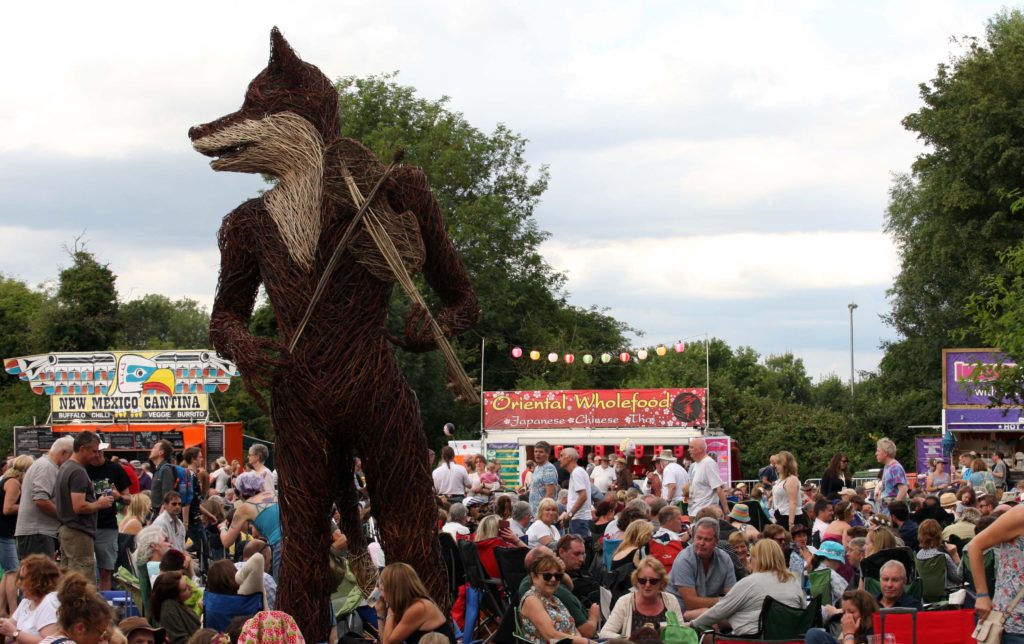 Over the course of the festival there were numerous interactive workshops to be enjoyed – songwriting courtesy of the contemporary English folk troubadour Chris Wood; singing with the two-time Mercury Prize nominee Eliza Carthy, a continually cheerful and expressive presence at Cherry Hinton Hall throughout the entire weekend; fiddle playing; an introduction to the whistle; and how to get started with the Northumbrian small pipes to name but a few of these educational events.

There were also talks – the MOJO interview this year was with the celebrated English folk singer and songwriter, Kate Rusby; fellow Yorkshire women O’Hooley & Tidow welcomed us all to an informal conversation about music and social conscience; and members of Songs of Separation – a collective of ten female folk musicians from Scotland and England – spoke passionately about the issue of ‘separation’ in its many forms and how they have interpreted it through traditional song.  Each and every one of these activities was connected by the festival’s guiding principle of inclusivity and an inherent sense of togetherness.

But, as ever, it was the musical performances that held the key to the overall Cambridge Folk Festival experience. Some hardened campaigners could be overheard bemoaning what they believed to be “the worst line-up in years”. There was, after all, nobody of quite the stature of a Van Morrison or a Joan Baez to head up proceedings. But as the weekend unfolded it was to be some of this year’s less leading lights who ended up stealing the show.

Thursday night belonged to Seafret. Last year they had played an afternoon slot in The Den, a small tent over towards the Wilderness Area of the festival site. This time round they had been elevated to Stage 2, a reflection on what has been a quite dizzying last 12 months for the Bridlington duo of Jack Sedman and Harry Draper. In the past year they had signed to the mighty Columbia record label; released their debut album Tell Me It’s Real; and a round of almost constant touring had honed their then embryonic songs into seasoned expressions of intuition and telepathic understanding.

It is difficult to believe that Jerron ‘Blind Boy’ Paxton is only 27 years of age. Both he and his music seem to belong in a different age. Shifting effortlessly between guitar, fiddle and banjo the Los Angelean songster drew from the greatest traditions of blues, country, ragtime and Appalachian mountain music. He was sharp; he was versatile; and he brought the most tremendous warmth and joy to the second stage on Saturday afternoon with what was a really quite wonderful homespun sound.

Another person whose music resonates through the annals of history is the Haitian-American cellist Leyla McCalla. Together with her husband Daniel Tremblay on banjo and guitar and Free Feral on fiddle they conjured up the intense, powerful sounds of disconnection, emancipation and spiritual healing. McCalla sang in English, French and Haitian Creole bringing to vivid life a range of different cultures and experiences. In a world that is now so full of troubles, her set spoke beautifully of the simple life-affirming pleasures of just being here and sharing music.

Kate Rusby confirmed her reputation as one of the greatest contemporary interpreters of traditional folk songs with a sparkling set that just oozed warmth and wit and was all washed down with lashings of lovely Yorkshire Tea. The undoubted disappointment of losing veteran soul man Charles Bradley from the line-up to a last minute illness was offset by the unexpected delight of his replacements, Darlingside. Having already appeared on the second stage only an hour beforehand, the Cambridge, Massachusetts indie-folk quartet showed no signs of fear or fatigue when they were surprisingly promoted to the main arena at such short notice.  Richly redolent of Crosby, Stills, Nash and Young in their prime, their textured four-part vocal harmonies cast a colourful, evocative spell over the early Saturday evening crowd. Singing round a single microphone, their cover of the Smashing Pumpkins’ ‘1979’ enhanced an already glorious mood of heightened nostalgia.

There may not have been a Van Morrison or a Joan Baez to close out Saturday night but there was Christy Moore. And possibly the greatest living Irish singer-songwriter did not disappoint. His performance was instinctive, stirring and unquestionably divine. ‘Go, Move, Shift’ still remained on his set list from his first appearance at this festival way back in 1973, but the abiding memory will surely be his contemplative, respectful homage to the city of Cambridge and one of its most hallowed sons, Syd Barrett. Moore’s interpretation of ‘Shine On You Crazy Diamond’ was as close as to definitive as you could possibly get without having to go back to Pink Floyd‘s imperious original.

Brìghde Chaimbeu reinforced the view that Stage 2 was possibly the best place to have been at Cambridge in 2016. The young piper from the Isle of Skye and winner of this year’s prestigious BBC Radio 2 Young Folk Award – joined here by the harp player Màiri Chaimbeul and guitarist Innes White from the John McCusker Band – belied her tender years with a performance of great maturity and depth.

It may have been five years since Mary Chapin Carpenter had last appeared at Cambridge Folk Festival, but neither age nor success has withered this five-time Grammy Award winner. Her performance was uplifting, full of renewed hunger, burning desire and great political integrity. Her robust dismissal of Donald Trump drew one of the loudest cheers of the day. Carpenter also impressed with the delicate balance that she achieved between subtlety and strength. Her reading of Lucinda Williams’ ‘Passionate Kisses’ is still something to die for, but for sheer breath-taking beauty ‘Oh, Rosetta’ from her most recent album The Things That We’re Made Of was the unquestionable winner.

Along with Kate Rusby, Eliza Carthy is regularly cited as having been in the vanguard of folk music’s more recent revivalism. The energy and spirit with which she and her 12-piece Wayward Band imbued their rousing performance only served to strengthen this view of musical regeneration. Equally at home with sea shanties, whalers’ songs, ballads and more traditional fare, and just like Cambridge Folk Festival itself, Eliza Carthy & the Wayward Band provided not only a perfect lineage between folk music’s past and present but also pointed the way forward to its very bright future.

This year’s Cambridge Folk Festival was held at Cherry Hinton Hall between 28th and 31st July 2016.