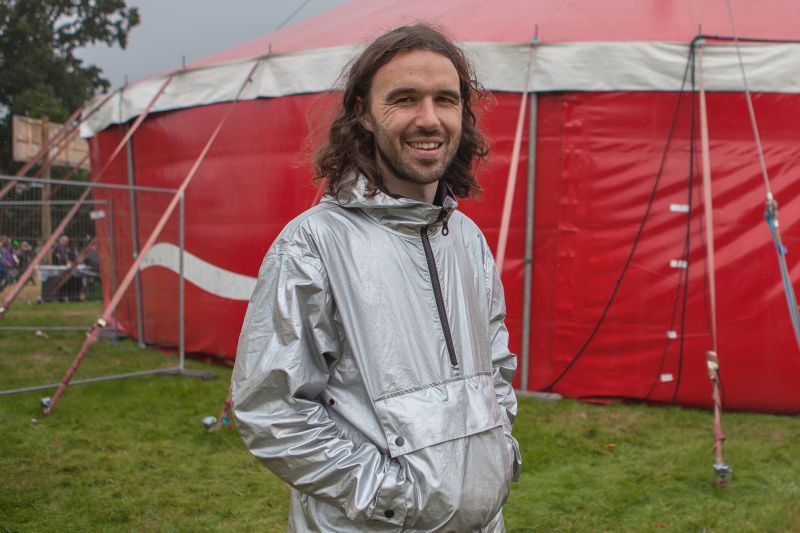 Musician, label boss, festival organiser and event promoter, Mark Daman Thomas is a busy man.  In fact, it would be fair to say he is a mainstay of the experimental Welsh music scene.  His label, Shape, is home to some of the finest Welsh talent, including H Hawkline, Sweet Baboo and Them Squirrels.  He’s part of famed psychedelic pop chameleons Islet and a co-producer of Cardiff’s “festival of adventurous music” From Now On that this year featured Meilyr Jones, Stealing Sheep and Julia Holter.  GIITTV caught up with this elusive musical maverick to find out about his latest musical guise Farm Hand and his Green Man collaboration with Welsh artist Stefhan Caddic and a Eglwys Faen colony of Lesser Horseshoe bats.

I hear you’ve been involved in a very special Green Man show in a nearby cave.  Can you tell us more about this performance called Noctule?

That’s right.  I was asked to do a one-off performance in a cave, which is home to a rare colony of bats; so I was there for a couple of months, using a bat detector to take samples of the bats.  Then I did a performance.

With an audience of Green Man settlers?

Yeah, the bats had an audience.  It wasn’t a huge audience but you couldn’t get many people in the cave.

How did you translate bat calls into sounds audible to the human ear?

We used this bat detector that takes the ultrasound the bats make and pitches it down so that it’s audible to humans.  It’s an interesting piece of kit and we were lucky to borrow it.

Brilliant!  I understand that you’re also showing a film of this performance at Green Man?

Yeah, on site there is a horsebox and they’re showing the film in there.  I’m hoping to go there today.

But you’re also here as Farm Hand, one of your new projects.

Yeah, we just did a gig in the Cinedrome with some friends who did our visuals.   I normally play in a band called Islet.  We’re making an Islet album at the moment; just finishing the EP.  I’ve never done a project on my own, but we were having a quiet time and I wanted to fill it with new music.  I just wanted another outlet; wanted to be more prolific and to keep writing music.

I’ve heard that Stephen Black, aka Sweet Baboo, is involved in this venture.

I’ve recorded three songs so far; all of them with Stephen.  He’s the producer, I guess.

Sweet Baboo is, of course, part of your label roster.  Are there any more Shape collaborations for Farm Hand on the horizon?

Not at the moment but we’re all intertwined with each other’s projects.  It’s a good group to be part of.

Where do you see Farm Hand going?  Do you have enough material for a release?

Yeah, I’m gonna do an EP.  It’s kind of fun.  I’m just enjoying being asked to do stuff, saying “yes” to things and seeing what happens.  There’s no real grand plan.

Do you have a timeframe for this?

I only started it in March.  Green Man was my fourth gig.  I probably have enough and should have an EP ready in the next couple of months.  I’m going to release it quite nonchalantly, I guess – get that out through our label, so it’s easy.

Good to know it’s going to be on Shape.  Speaking of Shape, you have your own festival in Cardiff called From Now On.  Is it going to be back in February next year?

Yeah, of course.  We’re making plans for it this week actually.  We’ve got some interesting projects.

Are you on the lookout for artists for your line up here at Green Man?

I am in a way…  We’re very particular with From Now On but I’m always looking out for the stuff I like.

Any clues to who we’re likely to see at From Now On 2017?  Farm Hand perhaps?

Maybe.  We’ll see how things develop.
To find out more about Mark, other Shape artists and events, visit www.shaperecords.co.uk.