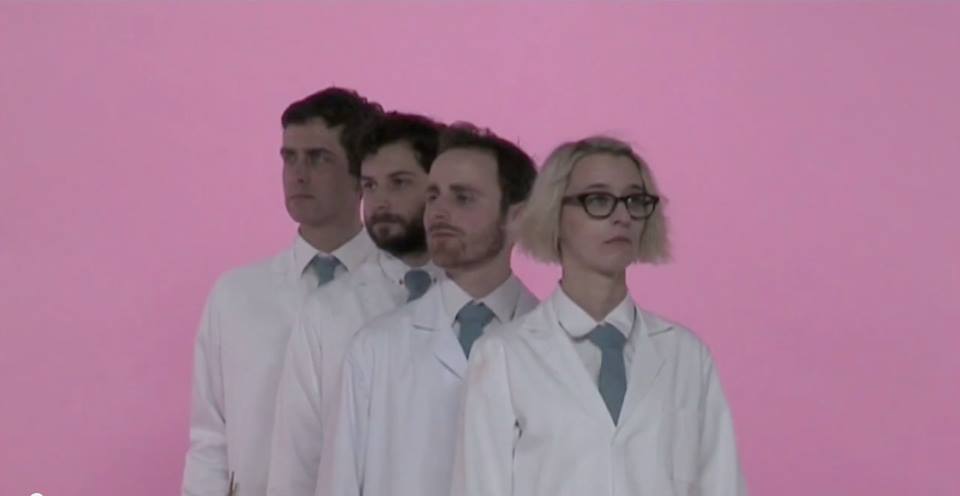 One of the brightest flames from the Fortuna Pop stable, Chorusgirl offer chorus pedal indie pop, beset with Cure-like dreaminess. Core songwriter Silvi writes descriptive lyrics, with touches of poetry. Live, there’s a rhythmic pep, with flashes of some of the best 4AD greats, and much of the ace alt radio indie from the mid 90s. The band combines the forces of a quartet of European musicians, centred around the self-defined ‘nifty bedroom producer’, Silvi from Germany. Silvi’s draw to England was borne of a need to be around culture, art and music that her hometown lacked.

‘I’ve felt like the odd one out most of my life,’ she says when we talk about This Town Kills, which happens to be a lament about many places she’s known, not just her hometown. ‘I’m not sure anyone in my hometown even knows that I make music,’ Silvi says, to reinforce that point. She continues: ‘London is a great place to be in a band because there are so many like-minded people and the DIY scene is very supportive. There are a lot of gig opportunities. I’m glad I’m here; I moved here from Germany solely to make music here and it has turned out to be a great decision. How London will develop in the future is really hard to say because it does feel like a shift is taking place that might make London difficult to afford. I know what it’s like to make music elsewhere though, and I must say I’m still happier to be here rather than anywhere else.’

Have you had lots of touring adventures? And have you made friends with other new bands?

Things are great; we’ve travelled quite a bit with the band this year. We toured around the UK, been to the US, Germany, Spain, Sweden and will go to France later this year. Brexit-induced panic has meant that we’ve said yes to everything and will keep saying yes if people want us. Otherwise, we’re mostly focussing on writing the new album, and are playing a few shows and festivals around that to try out some new songs for the rest of the year. It’s been great to finally play with Peaness from Chester in June who are brilliant, and we’re also stoked that we’ll be on the same bill as our guitarist’s excellent new band Suggested Friends soon.

In general, what’s the touring experience been like as you build things up with the band?

It’s been really great that wherever we go, there’s now always people who know the album. For a project that started out in my bedroom and writing songs when I felt at my most isolated, this is still an incredible and humbling experience. I appreciate it so much that people come out and see us and chat to us after the show. It may sound trite, but that really means a lot. I’m an introvert who lives in her head and can be a bit of a hermit at times, so connecting with others in that way is really satisfying and amazing.

How did you react to the news of Sean ending Fortuna Pop? Which label will you move to, and how do you think the landscape of indie pop now looks in the UK?

We’re in the process of writing the follow-up and will look for a new label next year. I think the indie pop landscape in the UK is really healthy; there are a lot of great bands around. I’m still so happy I moved here for the music. It was a good decision. Regarding Fortuna Pop, we were mostly grateful that Sean took us on as his last signing in November. He did really help us a lot. It is sad that he is stopping the label because it is a great label but it is amazing that he has been running the label for two decades. Nothing lasts forever, and people shouldn’t take their favourite labels, venues, bands etc. for granted. A lot of what the DIY scene achieves is based on individuals’ enthusiasm and time, and if you like it, I say support it while it’s there. Venues, bands, labels, scenes aren’t around forever. Buy the records, people!

Are you working on new songs, and how do they sound?

I’m very excited about writing the new songs, and we’ll be adding them to our set over the next few months. A lot of the first album was recorded by myself, playing everything bar the drums, so for this one we’ll go into it more as a band. The other three are extremely talented musicians, so it is exciting that we’re all working more closely together now. Otherwise, I have a pretty specific way of writing, so it’ll still be laden with melodies, guitar riffs and hooks. It’s just what I’m into. I like the choruses to be hummable, I like harmonies and I like guitar riffs.

How would you encourage people to start playing music and forming bands? What advice can you give?

I’d say just do it. You’ll figure out the rest as you go along. Make friends with other bands.

If you’re in London, your next chance to catch Chorus Girl play live comes around on October 12th, when the band plays The Finsbury. The band then head out on these dates: