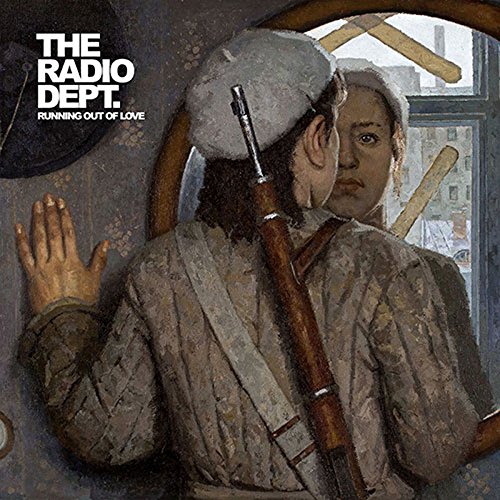 “We started off making a traditional guitar album in 2011 but decided it was too good for our label”. Ouch. The Radio Dept.’s long fallout with their equally long-suffering label Labrador was finally resolved in court earlier this year, resulting in one of those notorious beasts, the Contractual Obligation Album. But anyone expecting a blatantly uncommercial FUCK YOU a la Metal Machine Music or Here, My Dear is in for a very pleasant surprise, because Running Out of Love is an utterly glorious, highly focused collection of bittersweet electropop, fiercely political, steeped in the sound and spirit of late 80s dance music, and well worth justifying the six-year wait since 2010’s brilliant Clinging to a Scheme.

It’s also, loosely, a concept album, in which the band’s contractual struggles become a microcosm for the troubling spirit of the times, an age when our liberties are under attack from “racist loons”; when we need to stand up for the freedoms we have long taken for granted (“Don’t ask for patience, ‘cos we haven’t got the time/Freedom now! Freedom now! Freedom now!”); and when we need to seek inspiration in the open-mindedness, playfulness and idealism of 1980s house music – in particular, Inner City’s classic 1989 floor-filler ‘Good Life‘, to which ROOL’s key track, ‘We Got Game‘, is both a musical and lyrical (“I believe Paris Grey – singing songs can chase the clouds away”) tribute, in which the E’d-up utopianism of the source material is transformed into a call-to-arms – “There’s a choice to be made, we never used to blindly disobey…If we want it, we will have to take it from the overfed.” Or you can ignore the message and the meta-ness of the whole thing & just Bez-dance around the kitchen to it. I can confirm that that works too.

Elsewhere, the band turn a typically Swedish, sardonic and withering glare onto various fully deserving targets. The arms industry gets it in the neck on the dubby, trippy ‘Swedish Guns‘ (“You want something done? Get Swedish guns! Take care of someone? Get Swedish guns!”) ‘Committed to the Cause‘ may kick off with a bouncy Mani bassline and feature a proper hands-in-the-air Italian house piano break, but it’s a bitter critique of those who continue to vote for and perpetuate an economic dogma that is killing them (“We’re here to work, not break free/We’re here to hurt endlessly…But we’re never gonna give it up, committed to the cause”). The beautiful electro ballad ‘Can’t Be Guilty‘, which recalls Pet Shop Boys at their Behaviour-era peak, pokes fun at those people – and we all know a few – who wear their lack of interest in/knowledge of politics like some bizarre badge of honour (“Please don’t let me know what’s coming, even if it comes for us…I’m fast asleep & can’t be guilty”); as does the perky indiepop of ‘Bound to Happen‘ (“I drink in a local bar – it’s my contribution to the political debate”).

And at the centre of it all, there’s 2015 single ‘Occupied‘, a pulsing, melancholy techno banger that could easily have sat next to ‘Mr Disco‘ on side 2 of New Order’s Technique, on which the label gets torn a new one – “Don’t you wish there was a hell for some people? Some kind of retribution? Because when good people thrive, then the likes of you go down.” It’s the best thing they’ve ever done, sitting square in the middle of their finest album so far – which, when you consider what’s come before, is one hell of an achievement. You can dance to it, you can analyse it, you can be inspired by it; those of us of a certain age can get all nostalgic for the likes of The Beloved and Electribe 101 over it. However you approach it, it’s absolutely flawless, and hands down the best album of 2016.