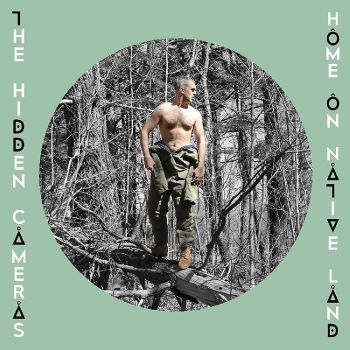 Home on Native Land is the sixth album by The Hidden Cameras. Led by Joel Gibb, the band have never broken through commercially despite some excellent records and great critical acclaim (especially for their two best albums, The Smell of our Own and Origin:Orphan). Home on Native Land is musically upbeat, which is a strong contrast to their dark 2014 release, Age.

The country influence is the most noticeable difference between Home on Native Land and their previous records. Country-tinged strings and slide guitar appear on the gorgeous opener, ‘The Day I Left Home’ . A re-recording of one their earliest songs, ‘He is the Boss of Me’ is a charming ballad with some classic Hidden Cameras lyrics, “he is my walrus and I am his blubber, his lover”. This wistful and quirky romanticism has been a common theme in some of their greatest works, (‘The Man That I am With My Man’, ‘We Oh We’, ‘Underage’, ‘Music Is My Boyfriend’).

Sadly, things take a step down after a strong opening. The mellow folk of, ‘Ode to an Ah Ahh’ is one of a few songs to feel like filler. The brilliant Neil Tennant provides backing vocals but his presence is so slight that it’s a wasted opportunity. The plodding, ‘You & Me Again’ sounds like My Morning Jacket if they’d fully embraced country music. ‘Don’t Make Promises’ and ‘Be What I Want’ are forgettable. It appears that the band have lost their character and bite — which was vital to their appeal. A cover of Wade Hemsworth’s ‘Log Driver’s Waltz’ impressively features Rufus Wainwright, Feist, and Mary Margaret O’Hara, but the end result comes off as cloying and it’s the album’s lowest point.

Despite these missteps there are strong moments on this record. ‘Counting Stars’ is a joyful Waterboys-esque song with one of the album’s best melodies. The charming ‘Big Blue’ features a stunning vocal by Gibb and is an effortless ballad containing the album’s most touching chorus. ‘The Great Reward’ and ‘Feeling ‘bout You’ are highlights with their tender melodies and beautiful strings. Some of the biggest successes on this record are the more subtle songs where they show heart and there are hints of the country-meets-soul of the Dexys Midnight Runners classic record, Don’t Stand Me Down.

Gibb has been working on this record on and off for the last 10 years. Lyrically the album is as strong as anything they’ve done and there are moving tales of love and tributes to Canada. But musically the band mostly sound uninspired, which is especially disappointing given how long Gibb spent on these songs. Age featured eight songs and was a much more satisfying listen. If they’d cut this album down to a similar length they could maintain their reputation as a consistent act. As it is, this is a frustrating and uneven record with only glimpses of their past triumphs.