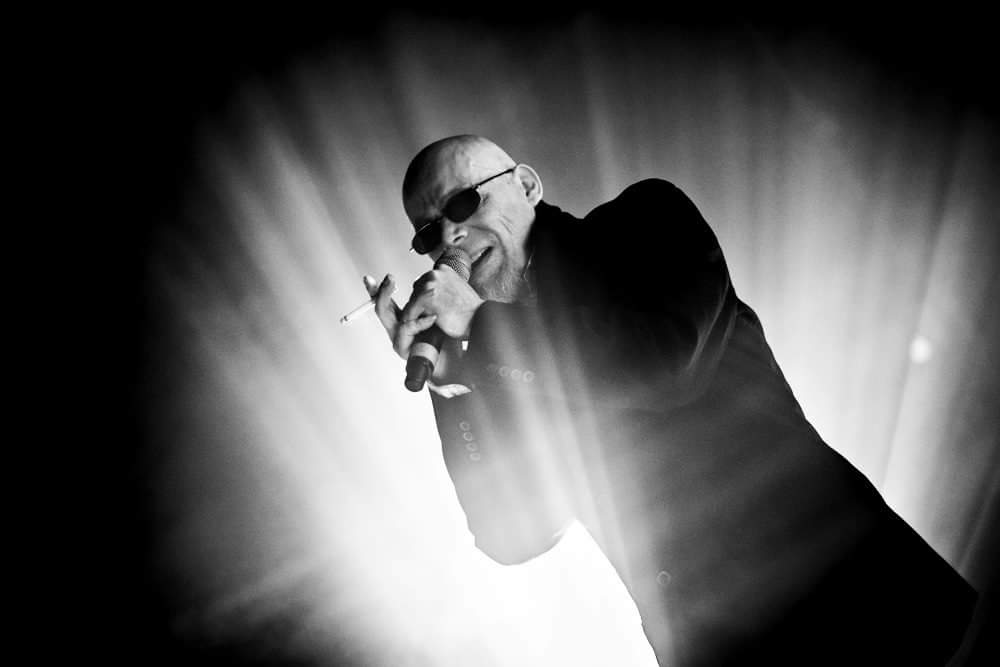 At 7.45pm, the space outside Birmingham’s 02 Institute is very sparsely populated, highly unusual when a band of The Sisters Of Mercy‘s stature are in residence. The reason becomes clear within five minutes though, as it appears that 90% of the audience has already taken its place in order to catch The Membranes, the post punk outfit fronted by John Robb for over 30 years now, splitting his time since the mid-90s with also fronting Goldblade and fairly regularly turning up as a talking head on TV music shows.

Robb and the current Membranes line-up largely resist the temptation to raid the back-catalogue, focussing mainly on songs from last year’s Dark Matter / Dark Energy album, though the penultimate song is a spirited take on ‘Myths and Legends’, from the debut Membranes album, 1983’s Crack House. The band’s energetic and powerful performance is lapped up by a the fairly large contingent of their own fans as well as casual onlookers, here to see the evening’s headline band.

So, to The Sisters Of Mercy, who are visiting Birmingham tonight for the first time in 15 years. The band have not released an album of new material now since 1990, but continue to be a big draw around the world on the live circuit and it is a packed-out Institute that awaits Andrew Eldritch and friends this evening.

The regulation dry ice engulfs the stage as the band appear and launch into Vision Thing‘s lead single ‘More’ and it quickly becomes apparent that the Sisters 2016 model has a slightly more metallic slant than the mid-80s line up, which contained The Mission‘s Wayne Hussey and Craig Adams on guitar and bass respectively. Although in truth, Vision Thing, and to some extent, its predecessor Floodland nodded quite heavily in that direction, with Meatloaf producer Jim Steinman taking on some of the production duties.

A couple more from the same album quickly follow, Eldritch pacing the stage with his trademark deeper than deep voice still perfectly intact after all these years. When ‘Amphetamine Logic’ follows, from the classic 1985 debut First and Last and Always, the crowd fervour steps up a notch and remains at that level throughout a show which is sequenced really effectively; tracks from the three ‘proper’ Sisters albums are complimented by older favourites such as ‘Alice’ and ‘Body Electric’ and unreleased material such as ‘Crash and Burn’ and ‘Summer’. Not that these are ‘new’ songs as such – the latter has been played live regularly since 2000, but still hasn’t officially emerged.

Ben Christo and Chris Catalyst have been in the live Sisters line-up for a good ten years now and have a great chemistry with Eldritch – a wonderful version of perhaps the finest Sisters moment, ‘Marianne’, a little faster than the recorded version, is very warmly received by the crowd and a razor sharp ‘Dominion / Mother Russia’ sounds even better than when it emerged almost 30 years ago.

Eldritch disappears during a run through ‘Jihad’, an instrumental from his short lived project The Sisterhood, only to return stating “I was angry…I’m angry now”. It isn’t clear what he is angry about, but the seemingly bad mood puts an extra malevolent edge to his delivery, which only serves to further enhance the songs.

The band leave the stage after ‘Flood II’, though the stage is so enveloped in dry ice by now, it isn’t immediately obvious that they have departed. They soon re-emerge and power through two thunderous encores – the first containing Floodland classic ‘Lucretia My Reflection’ and the second has the astonishing finale of ‘First and Last and Always’, a delirious ‘Temple Of Love’ and a dramatic finale of ‘This Corrosion’ – two bona fide Top 10 smash hits to seal a triumphant night which proves that Eldritch is not a man to be written off any time soon.