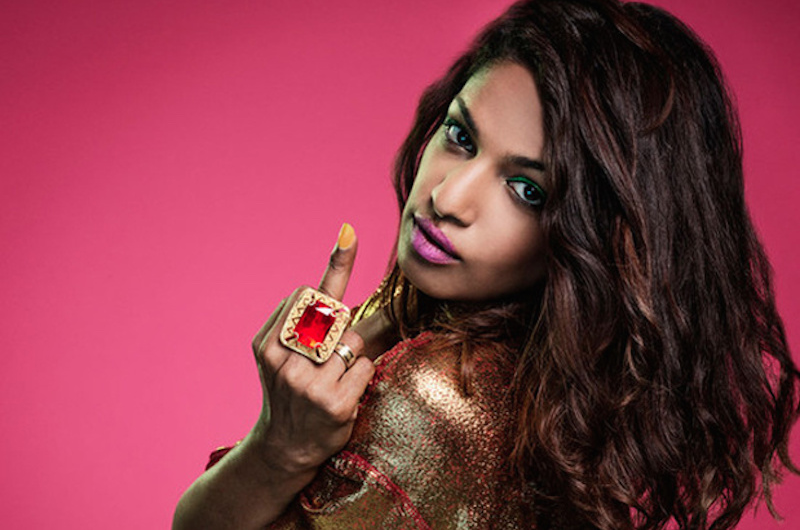 It’s been announced that M.I.A. will curate this year’s Meltdown festival on London’s Southbank. “For me this Meltdown will be about putting on a musical week that shows different types of music which have inspired each other to exist”, says MIA. “Genres that support other genres, redefining the concept of a melting pot. Respect the history, don’t live in it. I plan to bring together music’s best forward thinkers who have contributed to all our lives. When music acts as inspiration, it’s boundary-less”.Meltdown will take place from 9-18 June. The first line-up announcements will arrive in the coming weeks.

To celebrate this, and the fact that its ten years old this year, we look back at M.I.A.’s ‘Kala’ album, by revisiting Emily Tartanella’s 2007 reveiw:

“Coming after a storming success with 2005’s Arular, M.I.A. must be sweating in her combat boots. Music’s a fickle business, and last year’s rebel rebel comes off too easily as this year’s poser. Well, anyone who dares to question the Sri Lankan-born rapper’s sincerity, street-cred, or musical talent is looking for a nasty surprise, because Kala is grown-up where Arular was insolently adolescent, angry where Arular was superficial and developed where Arular was coolly stark.

Not to diss that instant classic, but it was first and foremost a promise, a chance for a new idol to create herself. This is the fulfillment of that album’s promise. M.I.A. has declared this sophomore album to be a tribute to her mother, whereas her debut was named for her revolutionary father. Yet the sounds of Kala are distinctly ‘unfeminine,’ the in the traditional senses of the word. It’s a more produced record, in contrast to the more straightforward Arular. But even though this album sounds as though it had a bigger production team than Timberlake and Timbaland put together, it remains less accessible than Arular. That album, while selling only 130,000 copies, made a huge sensation due to its catchy blend of rebel chic and fantastic beats. Kala, by contrast, is grimy, heavy, and less instantly danceable.

That’s not a criticism. Kala’s singles alone make this record one of the year’s best. First, one can no longer ignore the Bollywood elephant in the room – “Boyz.” the infectious, delicious, insanely over-produced single that announced M.I.A.’s dominance over rap, hip-hop, world music, and any other inane genres the world throws at her. Pitchfork may have derided its admittedly unclear political aims – “Boyz” works just as well as a booty anthem as a call to arms – but that’s part of the charm. Just listen to the stomping chorus, the call of â€œHow many boys are rowdy / how many start a war?!â€ and dancing is an involuntary, glorious reaction. Best single of the year, hands down.

Current single ‘Jimmy’ is just as fantastic, a smooth remake of a Bollywood classic from Miss Arulpragasam that waltzes in and out like a gin-soaked hurricane. Followed by the aggressive, beat-powered â€œHussel,â€ featuring rapper Afrikan Boy and one of the best lyrics in ages (‘You can’t touch me / Like leprosy’), this trio of numbers gives a little taste of everything M.I.A. could be: danceable, traditional, socially aware, modern, microscopic in focus and monumental in goal. If the rest of the album doesn’t stand up to these three songs, well, let’s be honest, what could?

But there are gems to be found here – ‘Mango Pickle Down River’ is an eerie, hypnotic mix of stomp and traditional African rhythms. Over and over, with a refrain of ‘When the rivers high we jump off the bridge/ And then we go home and play some didge,’ it manages to fulfill M.I.A.’s current fixation with African culture and politics but never seem insincere or cloying.

Opener ‘Bamboo Banger’ has its moments, but its sterility and cool, even distanced feeling, sharply clashes with the more single-ready moments of the album. It’s good, very good, but it feels out of place here. “Bird Flu,” a bamboozling track features chicken cries and moans that are half-frightened, half-seductive. “Come Around” is better ignored, a sad and limp end for such a vigorous album.

“Paper Planes” is completely modern, a smooth and sexy number that sounds at first listen like the perfect make-out track, but a cursory glance to the lyrics reveals it to be, of course, politically motivated. Coming from an era that’s produced the self-conscious and pretentious drudgery that is latter-day Bono, Green Day, and Thom Yorke, it’s impossibly refreshing to hear an album that takes its politics as seriously as its sound. Kala never comes off as preachy, possibly because it’s always siding with the little guy. M.I.A.’s scope is that of chicken cooking, kids scrambling for a break, and mothers slaving to give their children a better life. She casts no blame and throws no stones, but always comes out on top. ‘I’ve got more records than the KGB,’ she sneers, and we can only hope that prophecy becomes self-fulfilling.