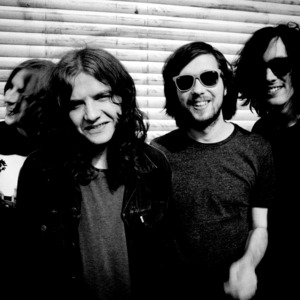 Seconds after the final bass-laden chords waft through the crowd following a rambunctious set from Hull-based quartet Vulgarians, a voice behind me chirps “well that was all rather fun…another pint?” and my review is pretty much written. I have just spent 30 minutes watching the band offer up their own brand of shoegaze/psych/K-pop and I’m smiling from ear to ear but I know that by the time the lads behind me have got their latest order in at the bar, the majority of The Cookie-crowd will already have turned their attention to tonight’s headliners, such is the life of a support act. Yes of course we’ve seen their like before, although watching vocalist Ryan Wilson-Preen stalk the stage with a menacing stare in his eye and his shirt tucked into his jeans does make me consider my own sartorial choice. I did not fight in the great punk wars of the late 70s to allow anyone such liberties. But when Vulgarians hit the sweet spot, ‘LIfe’s Successful Death’ for example, they offer up a strong case for a repeat viewing and new offering ‘Hands Around The Waste’ will be a crowd surfers’ wet dream. The band head out on tour this May; I recommend you pay them a visit but they may need to find another string to their collective bow if they are to up the charm offensive and their subsequent longevity.

Unbelievably, The Wytches are already onto their third major release without anyone really noticing, although given the sell out crowd tonight perhaps it’s merely me who hasn’t been keeping tabs on the lads. Immediately, there are two items of interest which catch my eye; firstly there is an over-proliferation of woolly hat wearers and secondly, everyone appears very young. So young, in fact, that several have brought a parent along with them! Now what did I say a moment or two ago about fighting the punk wars? The ambience is one of youthful frivolity, kids wanting to ape their elders by bouncing up and down to a barrage of loud rock music is a rite of passage we should never look to abandon.

The Wytches themselves know this only too well. Hidden behind a veil of unkempt, sweat-soaked hair, they produce a heady mix of testosterone-fuelled, guitar-driven paeans around love, loss and back to love again. It’s tried, it’s thoroughly tested and boy, is it effective! Vocalist Kristian Bell is a man of few words, actually he’s a man of no words whatsoever aside from a mumbled end-of-set “thank you Leicester” but why break the spell? His gruff, pained style of delivery dovetails perfectly with the relentless throbbing percussion whilst in front of him dozens of woolly hats are silhouetted as they career into one another in front of their parents. Even at my age I can recognise ‘Can’t Face It’ and ‘Ghost House’ as terrific stomps and I don’t need to be young to be hooked into their message of dissatisfaction with life.

‘C-Side’ is the nearest The Wytches ever come to pop, although tonight it comes over as too heavy, lost in the midst of noise and that, in a nutshell, is my only qualm with the band. It’s all very well appealing to the great uneducated in front of me but a smidgeon of light and shade would be welcome occasionally. If the proof of the pudding is in the eating then tomorrow will see a ton of tales of bravado being told in the Lower Sixth. I sincerely hope some things in life never change.