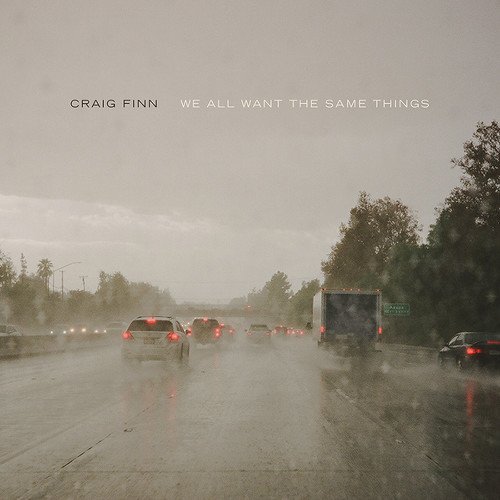 Craig Finn‘s solo career seems to me to be following a similar path as his exquisite band, The Hold Steady. Personally, I felt that the first four albums by the Brooklyn collective improved with each subsequent release, reaching its absolute peak with Stay Positive (though they continued to put out some fine long players even after that). Impressive though Finn’s first two albums were, he appears to be following suit, for We All Want The Same Things is his best effort yet and by some distance.

Initially, we are greeted with some ‘Tomorrow Never Knows‘ style power beats that introduce the fascinating ‘Jester & June‘, and given the squawling saxophones, are briefly made to wonder whether he has gone all avant-garde on us and decided to make his own updated Trout Mask Replica. We soon learn, thankfully, that this is not the case, and a riveting tale of dubious drug deals is set before us while later, the phased guitar harks back to Tad Kubler’s on ‘Joke About Jamaica‘. It’s a brilliant way to kick things off and single ‘Preludes‘ is arguably even better, ostensibly Finn’s account of his return from college back in the day, and his memories of that “What the heck do I do now?” feeling.

You can, of course, split most Hold Steady songs into two groups – the ‘chorusless’ ones, and their heavily hook laden companions. Fans of the latter variety will adore the splendid ‘Ninety Bucks’ with its relentlessly addictive “Nathan you’re my only friend” refrain before two of the best tracks yet recorded in the great man’s career – ‘Birds Trapped In The Airport‘, as mentioned in my recent interview with Craig, seems to be an extremely romantic number which includes, for the first time, an openly gay character who is relieved and delighted that his partner survived a near death experience. Craig did say, in our recent interview, that he thought it was that, at first, but then was unsure of the character’s sexuality by the time he’d finished writing it. Either way, the affectionate “James, I want you to dance with me” line is both moving and uplifting, and makes you realise that, for all our fallibilities, the human race still is more than capable of compassionate love. Likewise the mostly spoken word ‘God In Chicago‘ is a devastatingly beautiful piece recently given Video Of The Week here on God Is In The Tv.

As with all of Craig Finn’s output, there is a whole sweet shop full of lyrical candy from which to choose, there being no better wordsmith alive right now. Take the start of ‘Rescue Blues‘ as a case in point – “She’s got that shortness of breath again. Worst case scenarios – “what if the good guy finally dies? / I sit next to her, hold her hand and reassure, remind her it’s a TV show, the heroes somehow always end up fine or the sheer rock and roll assault of ‘Tracking Shots‘, where “The righteous path is hard to walk; the skeletons make sexy talk” and there’s little doubt, even before the closing strains of the affectionate finale of ‘Be Honest‘, that the guy has lost none of his musical mojo and long may he hold us under his spell. Simply fantastic.

We All Want The Same Things is released on 24th March through Partisan.