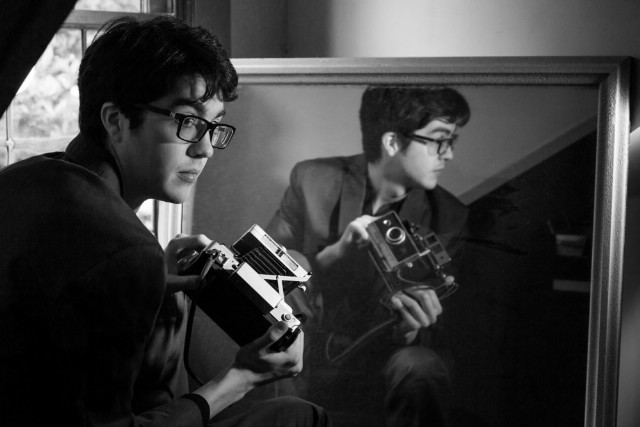 Standing in the queue for this gig, it is obvious everyone’s excited Car Seat Headrest are in town. The majority of the audience look to be in their early twenties and are ready to sing, dance and sway the night away to the tunes of album Teens of Denial.

The venue is shaped around the stage and as opening act TRAAMS walk on, the crowd’s ears begin to perk up. TRAAMS are a three-piece who make an incredible whirlwind of noise. ‘Low‘ is a memorable track as is opener ‘Costner‘… They do a good job in warming us up.

Car Seat Headrest take to the stage bang on time – 9.30. Frontman Will Toledo walks on last in a black polo neck jumper to rapturous applause and they begin with ‘Fill In The Blanks‘. A lot of the audience know all the words and during the quiet parts of the song, the room is awash with singing. “You don’t have to be depressed/You haven’t tried hard enough to like it,” are lines especially belted out by most. A couple of audience members hold up a banner saying “We love Seth” – the bassist doesn’t see the sign, though, so can’t in any way reciprocate.

Near the end of ‘Unforgiving Girl (She’s Not An)‘ Will breaks a string, which is fine as he swaps guitars only for the same thing to happen during the highlight of the night ‘Drunk Drivers/Killer Whales‘ which completely stops the singer in his tracks, killing the rest of the band playing. It is especially a highlight during the recommenced outro –“It doesn’t have to be like this/It doesn’t have to be like this/Killer whales/Killer whales.”

The guitar player, Ethan, sings Pixies cover ‘Motorway To Roswell‘ and his backing vocals add so much to Toledo’s singing during the rest of the set. The band look at ease and are tight as anything, except for the Devo cover of ‘Sloppy I Saw My Baby Gettin’‘ in the encore which they goof up and disagree as to who comes in where with Ethan taking over. In addition, the fire alarm goes off a few times but the band are able to drown it out. No need for evacuation; no one pays attention.

There was something missing, though. For all the hype, CSH are still a young band, even if the 24-year-old singer Will Toledo’s (real name Will Barnes) has written 11 albums. Perhaps they need more crowd interaction or a larger stage presence? How about telling a story or something..?

They finish with a triumphant ‘Destroyed by Hippie Powers‘. It would have been pleasing if they had come on after the encore as the crowd were begging for “one more tune,” so that leaves enough room for next time. At least they leave us waiting for more.