In a little over three weeks time some of the very best R&B, Americana, Blues, Soul, Roots and Country music that is around today will collide deep in the heart of Suffolk countryside as we welcome back the Red Rooster Festival. Returning for the fourth consecutive year to the spectacular surroundings of Euston Hall – a country house and home to the Dukes of Grafton for more than 350 years, it is located in the village of Euston just south of Thetford – Red Rooster has quickly established itself on the UK festival calendar as an event that harnesses the highest quality music and style.

Red Rooster goes from strength to strength and this is reflected in this year’s terrific line-up, headed by the prodigious talent that is Nick Lowe. He is a man who first plied his musical trade with Brinsley Schwarz more than forty years ago now and who has since gone on to carve out a most illustrious solo career steeped in the roots of soul, country and rock’n’roll.  There is every chance he could play some of his most well-known songs, ‘I Knew The Bride (When She Used to Rock ‘n’ Roll)’ (a hit record for Dave Edmunds in 1977), ‘Cruel To Be Kind’ and ‘The Beast In Me’, made more famous by his former father-in-law Johnny Cash.

Sharing top of the bill with Nick Lowe will be JD McPherson and Nick Waterhouse. McPherson is an Oklahoman singer who is much more than some mere rock’n’roll revivalist. He takes the very essence of 1950’s R&B, rockabilly and doo-wop and creates an incendiary sound out of it that is fit for the modern day. Fellow American Waterhouse is another man whose heart may well lie in old school R&B but whose refreshingly new music stays several steps ahead of simple nostalgia. 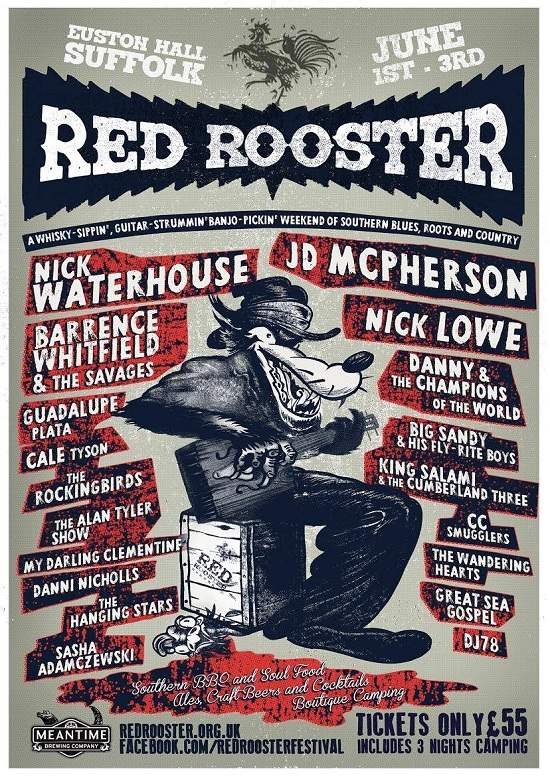 An incredibly strong supporting cast includes the scorching soul outfit from Boston, Massachusetts Barrence Whitfield & The Savages, homegrown talent in the form of Danny & The Champions Of The World who fuse the central elements of soul, country and rock into what is one big, big sound, and confirming the far reach of Red Rooster’s international arm, the Spanish blues-punk trio Guadalupe Plata.

Cale Tyson’s charismatic country, multiple Blues Award winner Ian Siegel, the magnificently named Big Sandy and his Fly-Rite Boys with their grand take on western swing and country boogie, and the vastly underrated British country-rock band The Rockingbirds are just some of the other names who will add to Red Rooster’s truly adventurous line-up.

But Red Rooster is not just about music as it will also offer some incredible food and drink all of which will be based around the festival’s central theme of the American Deep South. Expect to come across homemade chicken street food, BBQ, bourbon, vegan southern style tacos, gumbo and jambalaya on your travels around the grounds of Euston Hall come the first weekend in June.

Red Rooster Festival can be found online at:

Tickets for Red Rooster can be purchased HERE (a full weekend ticket priced at £55 plus booking fee includes entry to the festival from 4pm on Thursday 1st June, with 3 nights of camping and free parking for cars)