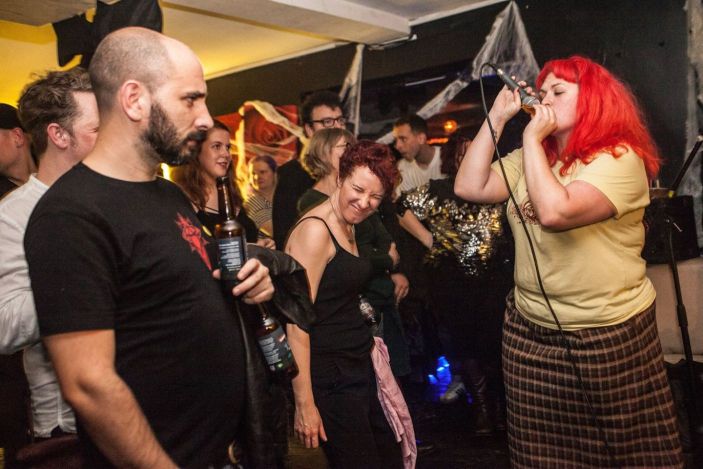 In the first in a series of features upon the issues of sexism and misogyny in the world of music, Helen Angell looks at the experience of ‘Sexism, Misogyny and the Audience’ from her own perspective.

I’ve been going to gigs since I was twelve (King – Sheffield City Hall, 1985). I’m not a great deal taller or bigger built than I was then. I’ve been to gigs with female friends, boyfriends, other people’s husbands (with permission) and quite a lot just by myself.

There’s no doubt that the majority of gigs I go to are male-dominated but that’s simply a by-product of the music I like. It might also be that many women my age have simply outgrown music or have other priorities.

As a small, lone woman at gigs I have never felt under any threat. The scariest part of going alone is getting back home again afterwards. The majority of older men at gigs are out for an enjoyable night with their mates and to have a few pints. Women are not part of the equation.

In my experience, men are usually courteous but just in the same way that I would be when I hold open a door for a man. I’ve been invited a number of times to stand in front of men so that I can see, knowing that they can still view the gig quite easily over my head. I even, once, got sent up to the balcony with the under 14s and their parents by a security man who was concerned that my view wasn’t good enough (Johnny Marr – 02 Leeds, 2016). In contrast, I have been elbowed out of the way quite a few times by other women and my male partners always had more trouble with men than I did.

It doesn’t matter if a gig is male-dominated. It should have no bearing on how anyone behaves or how they should expect to be treated. But, if a gig is a place of equality, it is not somewhere you should expect to be protected. As with all things, you know it’s going to be physical at the front and you decide whether you want to engage in that or not.

Sexual assaults at gigs, however, are another thing entirely. Advantages are taken in the melee in front of the stage as with any other context in which people are close together. But that doesn’t make it ever acceptable. Initially, I had thought the perpetrators were a small number of individuals but seemingly this is not the case. With recent high profile incidents involving critically acclaimed bands, bringing more attention to the issue.

For a younger generation of women, gigs can be hostile places. They are subject to verbal and physical abuse of a disturbingly sexual nature. The rise in online campaign groups and promoters such as Girls Against, Safe Gigs For Women and Loud Women, each with followers in their thousands, demonstrates the extent of the problem. Mel from SGFW said: ‘We have heard of everything from catcalling and unwanted touching to instances of rape at festivals…We say this is not acceptable and the culture needs to change so that bystanders feel empowered to intervene if it’s safe.’

The issue, of course, is symptomatic of a rise in everyday sexism. Laura Bates’s online campaign has become the strongest voice in documenting and challenging this. Somehow we have allowed overly sexualised images of women to be aspirational, under the assumptiom that to behave in such a way is empowering. An instinctive way to respond to sex as a threat is to threaten back and this is what we are seeing.

Women I know in their late twenties express concern about how younger generations of men are being encouraged to act when they are together: ‘Generally speaking, I think young men feel an expectation to act in a certain way when in the presence of other men: they ‘should’ be assertive, strong and with a focus on the opposite sex, particularly in a domineering and overtly sexual way.’ There seems little room in society in any more for either young men or women to express and explore who they are freely.

Michael, now in his early thirties, said: ‘There is still pressure for groups of young men to behave as ‘lads’. When I was going to gigs several times a week… I was very aware of there being groups of ‘lads’ who were not always there for the music…In the workplace as well there still feels a certain level of pressure to behave in a ‘macho’ way or to be a ‘joker’. There doesn’t seem much room for being sensitive or honest. You are expected to join in with their banter.’

The notion that a gig is somewhere that you would look for love or even sex is a little bit lost on me. You can’t hear or speak to anyone because of the noise and sometimes you can’t even see people because of the lack of light.

Inherently, going to a gig is about being totally absorbed in the music and spectacle at hand. You’ve paid plenty for it, after all. As a society we seem to have become preoccupied with the idea of coupling up or that any social event is going to end up as a sexual encounter.

It is sad that gigs have become a place to be seen through social media rather than a place just to be seen. Even the manner in which you are ‘seen’ is limiting. Think about the brilliant flamboyance and sheer cheek of men getting dressed up to see David Bowie or Marc Bolan compared with the conservatism of today. Getting into a gig with other people like you should be a relief, a place of refuge, a place to test things out safely.

There is a beauty in the comradeship of attending a gig where you know that tens, hundreds even thousands of people share your same passion. Nothing else is required to make that a good night.