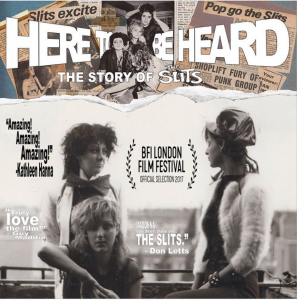 Pledge Music are running a campaign for the DVD release of ‘Here To Be Heard: The Story Of The Slits’ in the Spring of 2018. Its a new documentary film about the first all-girl Punk group, The Slits. Directed by William E Badgley (‘Kill All Redneck Pricks’), it received its world premiere at the BFI London Film Festival in mid-October.

Contemporaries of The Clash and Sex Pistols and the godmothers of the musical movement known as ‘Punky Reggae’, the film tells the story of the young women pioneers of the mid-70’s Punk era from a female point of view and runs from the inception of the group in 1976 to its end in 2010 (coinciding with the death of lead vocalist, Ari Up).

‘Here To Be Heard: The Story Of The Slits’ is produced by Badgley via his company Molasses Manifesto and Mark Vennis of Moviehouse Entertainment, while Pledge Music are working with the duo to bring a DVD release of the film direct to the band’s loyal and, in many cases, long-time followers. It is the first film project that Pledge have been involved with.

Badgley says: “It has been an honour to be a part of the telling of this crucially important and untold story about The Slits, and I was proud that we were able to begin our journey in sharing it with the world at the 2017 London Film Festival.”

Adds Vennis: “Bill came to me with the project and I jumped at the chance to work with him on a film about some of the most ground-breaking musicians from the Punk era. We were thrilled that it premiered in the group’s home city and we will shortly be announcing further screenings ahead of its DVD release.”