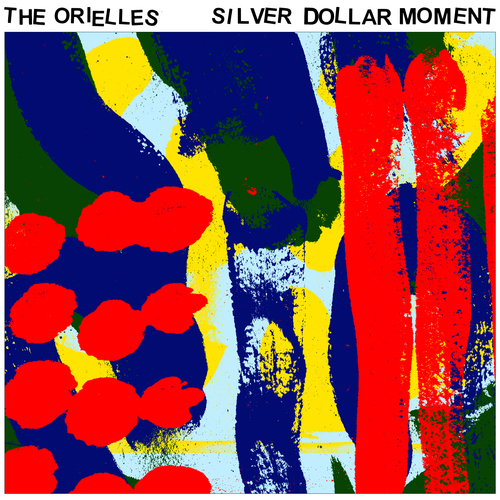 Following their signing to Heavenly Recordings and release of one of last year’s best singles in ‘Sugar Tastes Like Salt’, there’s a bit of a buzz around the release of the Orielles‘ debut album Silver Dollar Moment. The first thing to note is that the aforementioned single isn’t on the album, a bold statement if ever there was one. It’s a gamble that pays off though, as they’ve already moved on from the psych and shoegaze influences that ran through that song. Second track ‘Old Stuff New Stuff’could almost be a reference to it; musically it isn’t a million miles away, right down to the whoops of the bridge but the lyrics talk about “Less indecision”, perhaps a reference to how this song makes its point in almost half the time ‘Sugar Tastes Like Salt’ did.

Silver Dollar Moment is certainly a confident album, expanding the band’s palette from the surfy wooze of their earlier EPs with an embrace of all the bells and whistles of an expensive studio (literally at times; bells back singer Esme Dee Hand-Halford’s vocals on ‘Blue Suitcase (Disco Wrist)’ and breakdowns are augmented by enthusiastic hollers and whistles on more than one occasion). They wear it well though, filling out the sound on songs like ’48 Percent’.

The stronger moments are the more upbeat, however. The likes of ‘Let Your Dog Tooth Grow’ (whatever that means) and ‘I Only Bought it for the Bottle’ are great fun. ‘Dog Tooth’ uses the contrast between Esme’s hazy voice and guitarist Henry Carlisle Wade’s spoken backing vocals to deadpan effect in the verses and to surprising power in the chorus. ‘I Only Bought it for the Bottle’ is a song that you can only imagine being written by a band so young. For all the references to David Hockney, it’s effectively a song about learning what your poison is. This is actually a recurring theme on the album, although it’s delivered much better here than on opener ‘Mango’ which chugs along like middle league Britpop, complaining of ‘[drinking] two PBRs, already faded’. One of the few criticisms would be opening the album with its weakest song, actually. Overall, there’s plenty of Orange Juice-flavoured wonky indie pop to take away the taste of ‘Mango’.

The band explain the title of the record thus: “It’s anything that’s unexpectedly brilliant. We played in Toronto, at this bar called the Silver Dollar Room. We’d been in Canada for 36 hours, no sleep, we’d already played at 10, then we played a show at the Silver Dollar at 2am and it was one of the best shows we’ve played. So a silver dollar moment became anything that’s good, but unexpectedly.” No-one familiar with what they’ve done so far would say that it’s unexpected, but Silver Dollar Moment is certainly brilliant.

Silver Dollar Moment is out now on Heavenly Recordings.