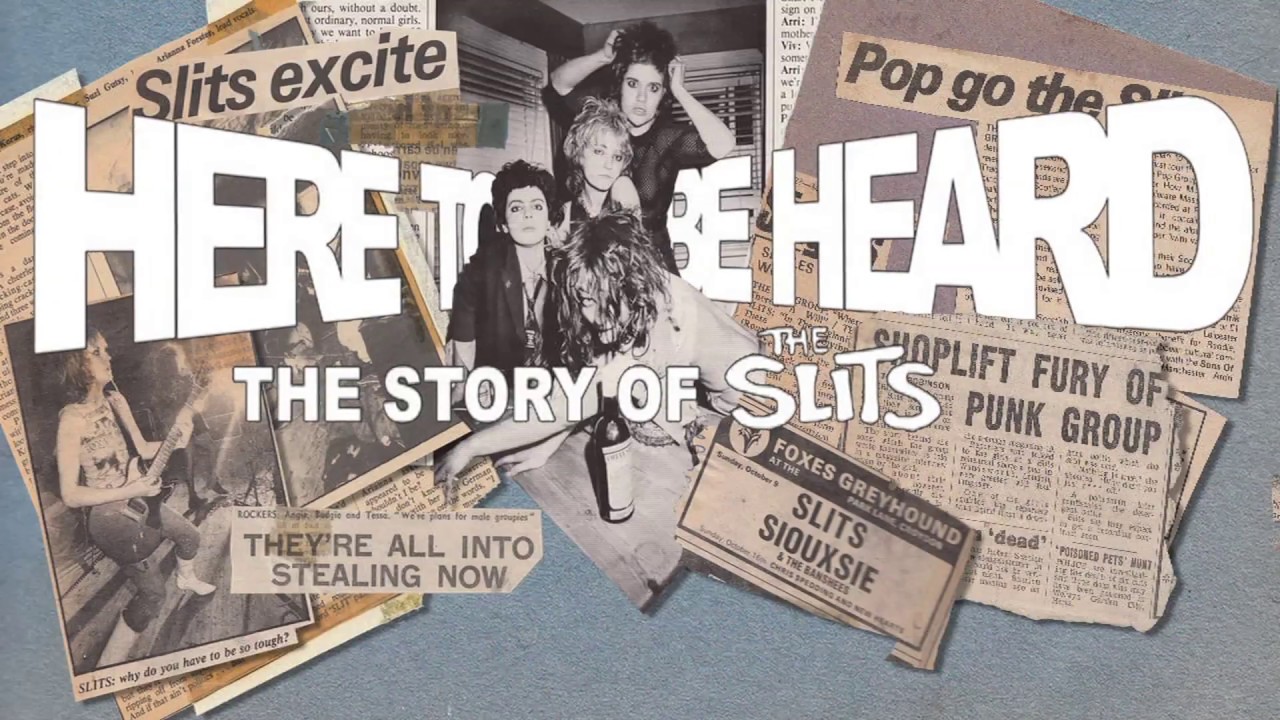 In the year that marks the 40th anniversary of having seen them supporting The Clash at Newcastle Polytechnic, it does seem strangely significant to be sat here tonight watching Here to Be Heard: The Story Of The Slits. A documentary directed by William E. Badgeley about the pioneering all-female band from the late ‘70s, the film’s archive gig footage brings back vivid memories for me of that dark December night in the North East, one of the dates on The Clash’s then Sort It Out tour.

Tensions were already running high around the venue due to a ticketing policy that had confined entry to only those holding student union cards or their named guests.  Ari Up, The Slits’ firebrand frontwoman rightly took exception to this form of academic apartheid and promptly accelerated the evening’s growing sense of discontentment, aggression and simmering violence when inviting the crowd to “wreck the place”. An incendiary 15-minute set ensued during which one student had his head mercilessly kicked in after attempting to molest Ari Up on stage. These were all signs of what were far more restrictive and in many ways more deeply troubling times.

The first half of this immensely well-meaning, most respectful yet ultimately flawed film locates The Slits emergence onto the London punk scene of 1976 in a bleak society riven by marked economic, cultural and gender inequalities and divisions. The Slits railed against such oppression. They did not compromise; they would not be suppressed; and the brutal, incendiary textures of their sound – they were already starting to absorb the influences of Jamaican music into the spiky, scratchy menace of punk – reflected their fierce feminist and collective stance.

Stitched together by talking head interviews from key players of that period – most notably band members guitarist Viv Albertine, drummer Palmolive and bassist Tessa Pollitt, whose original scrapbook serves as an additional press clippings’ commentary on the band’s dramatic evolution onto the punk landscape – and despite its often desperately poor sound quality, the early part of the film captures perfectly the mayhem of the era and The Slits’ incredible spirit and influence.

Palmolive had been sacked by the end of 1978 and the band split some four years later but not before having released Cut, a still compelling and confrontational fusion of punk, dub and pop music and whose cover – with Ari Up, Viv Albertine, and Tessa Pollitt appearing boldly defiant, topless, and all covered in mud – still divides opinion to this day.

But thereafter Here to Be Heard: The Story Of The Slits loses its way. The wisdom of the band’s reformation in 2005 – albeit with only Ari Up and Tessa Pollitt of its original members still present – has to be open to question, their original potency feeling somehow diminished by the passage of time and the shifting of trends. The film’s Executive Producer Jennifer Shagawat, The Slits’ former tour manager, had initially started compiling the film with Ari Up before the singer’s untimely death from cancer in 2010 at the age of 48. And in many respects, the film serves as an homage to Ari Up as much as it does The Slits. It, therefore, feels particularly significant that neither her mother Nora Foster or her step-father John Lydon make any visible contribution to the film.