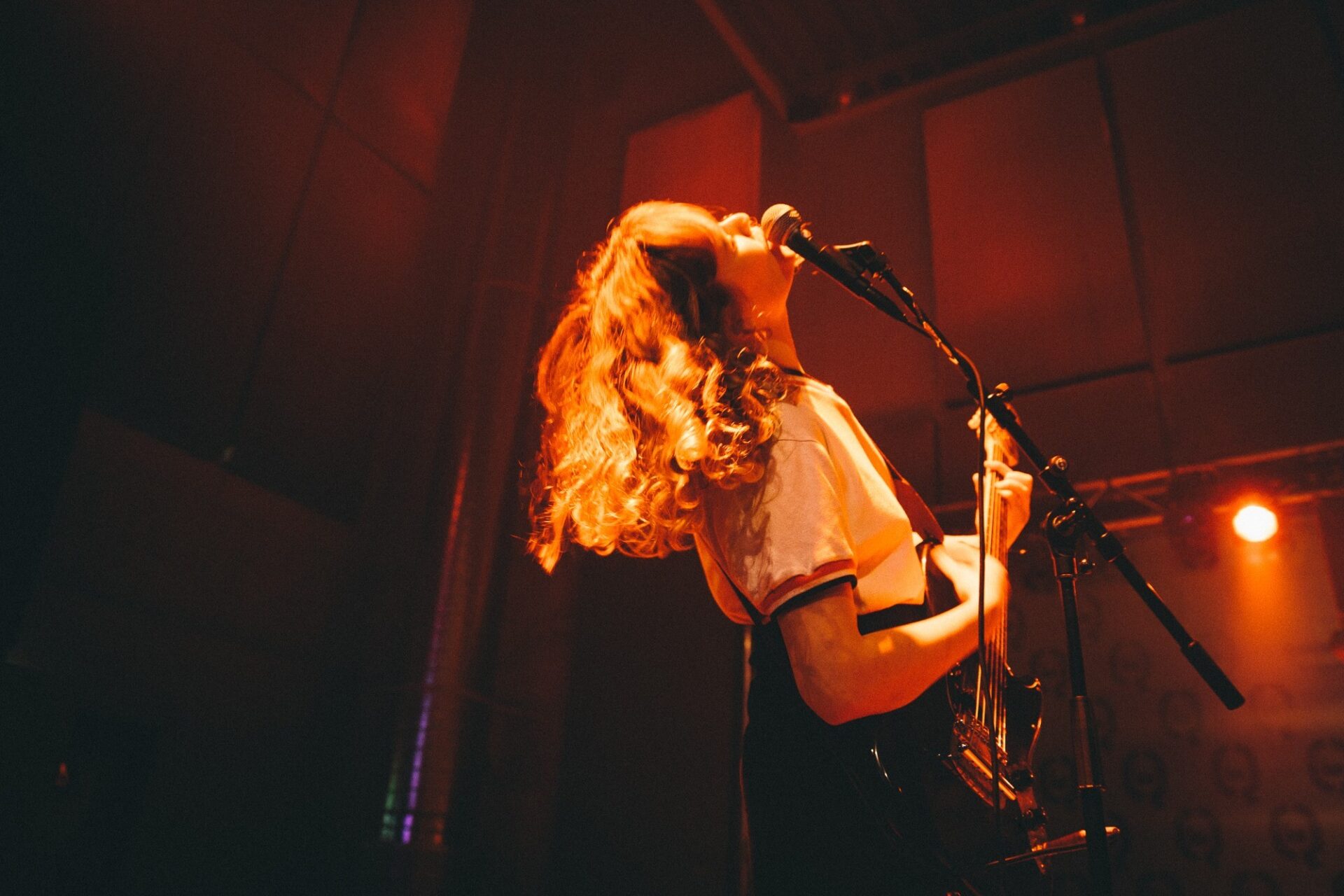 People are sporting paper party hats in the Moth Club as they sip from plastic cups in its brown leather booths. It’s not clear if they are necessarily part of this evening’s festivities but it is a celebration of sorts for the 20-year-old Amsterdam-based artist, Pip Blom. Inspired by her similarly musical parents, Blom started writing songs in her early teens and since then her self-confessed “lo-fi indie pop” has taken her across Europe and bagged the band the upcoming support slot alongside 90s alt-pop icons, The Breeders. Not bad for someone who’s still doing the dishes in a restaurant when she’s not touring the globe.

It’s fair to say then that there’s gross anticipation for an artist who is still yet to receive a full-length debut. Tonight’s set is a sneak peek into Pip Blom beyond the slim Spotify pickings. Flanked on stage by her bandmates and brother on guitar (Blom once explained how Tender Blom “never wanted to play together, but then all of a sudden said ‘Alright, I’ll be in it’”), it’s not surprising that the group have been teamed up alongside the Deal sisters. Not just for the sibling symmetry but the slacker strings and sashaying vocals. At points, it’s difficult to discern her Courtney Barnett-esque storytelling drawl through the wall of distortion but that was always the alt-pop beauty, right? It’s that Pixies perfection of guitar dominated, girl-guy vocals, thundering bass lines amongst the Big Muff.

Early release ‘Truth’ is all bound up in awkward admiration, ultimately misplaced on some smoking-drinking especial: “I try my hardest, you don’t even try your best. You know a lot, I know a lot less”. Follow up, ‘Babies Are A Lie’ also channels a lot of the same lovelorn romance finding Blom crying on the bus ride and the checkout line: “I don’t like doctors, I’m not fine” with warm reverb and a slugger of an earworm chorus hook that finds the whole troupe beaming. Former single, ‘School’ which followed 2016’s Are We There Yet? EP is a standout towards the end of the set. The guitars could be snagged straight from a Libertines demo tape, all buzzsaw riffs and wonky lead notes as Blom drawls: “It’s too late to go to school”. Not the best educational anthem but a lesson in raggedy garage rock majesty that should be blasted out from the bedroom stereo whilst your parents bang on the ceiling below to turn the racket down.

Penultimate number, ‘I Think I’m In Love’ has already been bandied about the radio airwaves with gusto and rightly so. The Deal sisters would revel in the primal percussive bliss not dissimilar to that of their own debut, Pod which Kurt Cobain cited as an inspiration on Nirvana later dubbing it “an epic that will never let you forget your ex-girlfriend”.

A sea of party hats has been lured out from the sidelines to thrash it out in the pit. Maybe that’s the thing about Pip Blom. Her knack for storytelling and handle on the fretboard draws the little fragments of teenage angst, and spirit, out in all of us. And that’s totally worth celebrating.