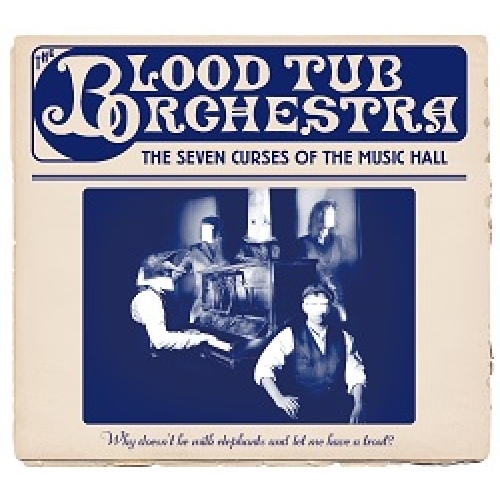 If you’d told me, at the beginning of the year, that one of my absolute favourite records of 2018 would be an album full of songs from the Victorian era up to the period just following the First World War, I would probably have given you a straitjacket. If you’d then informed me that said album concludes with a track called ‘The Fine Old English Tory Times‘, I probably would have made you wear it. Tightly.

Thankfully the latter ditty is a satirical one “from the pen of Mr Charles Dickens, no less” as we are informed on the sleeve notes, which are entertaining enough in themselves, before you even hit the ‘Play’ button. Often it’s difficult to choose what to review from the multitude of albums I get sent, but the fact that ‘The Bolshevik‘, a ramshackle ballroom blitz, ends with the words “Why doesn’t he milk elephants and let me have a trout?” – which also seems to double up as the long player’s subtitle – means that, really, how could I ever say no to it?

The whole thing will have you smiling like an air stewardess in no time, though there are no forced grins here, as the opening gambit of “My goodness, you do seem a miserable lot” from the brilliant opener ‘Things Are Worse In Russia‘ strikes up, and there’s no let up throughout. The closest thing I can compare the latter track with in terms of exuberance is The Wedding Present‘s staggering sidestep Ukrainski vistupi v Johna Peela. But don’t be misled into thinking this is going to be all about hell raising, for the outfit’s take on Charlotte Alington Barnard‘s 1868 tune ‘I Cannot Sing The Old Songs‘ sounds like The Psychedelic Furs doing Music Hall – Kitchens Of Distinction at a push – and is positively heart-wrenching. Then we are met with a Madness-like swagger, Mr T. Whelan’s slightly slurred vocal reminiscent of Suggs, on the rambunctious ‘The Football Match‘ in between its fairground verses, before the stunningly brilliant ‘They Can Do Without Us‘, “a 1922 sex wars belter“, which lies somewhere between Dr Feelgood, Squeeze and Chas and Dave, and is utterly delightful for it.

Mrs V. Gwyther (for this is how the band are listed on the sleeve) takes up microphone for the rousing ‘It Ain’t All Honey And It Ain’t All Jam‘, and is so fiercely – passionately – delivered that it feels like Grace Petrie has jumped up on stage with them to vent her powerful “we CAN achieve things together!” clarion call. Later on, ‘As You Were Before‘ harks back to the Nutty Boys again, while the more avant-garde musing of ‘Never Let Your Braces Dangle‘ is more akin to an experimental Tom Waits.

Some of it is quite spectacularly tuneless – in a good way – so ‘The Spaniard Who Blighted My Life‘ would transform an Ed Sheeran fan into a gibbering wreck within seconds, while the more exotic, folksier melody of ‘We’re Glad You’ve Got A Gun‘ is a brooding beast of a song underpinning the writer’s – and, back then, the public at large’s – mistrust of all things German in 1925.

To my eternal shame, I started suspecting that the whole “these are old songs from the 19th and early 20th century” spiel was perhaps hogwash, so superbly realised do they seem in this form, so I Googled several of them, and sure enough, there they were on YouTube by their original purveyors. The Blood Tub Orchestra have grabbed them by the scruff of their necks, shaken them in the most brutal manner, and as a result given them a new lease of life that thrills and enchants at every corner. Just fabulous really.