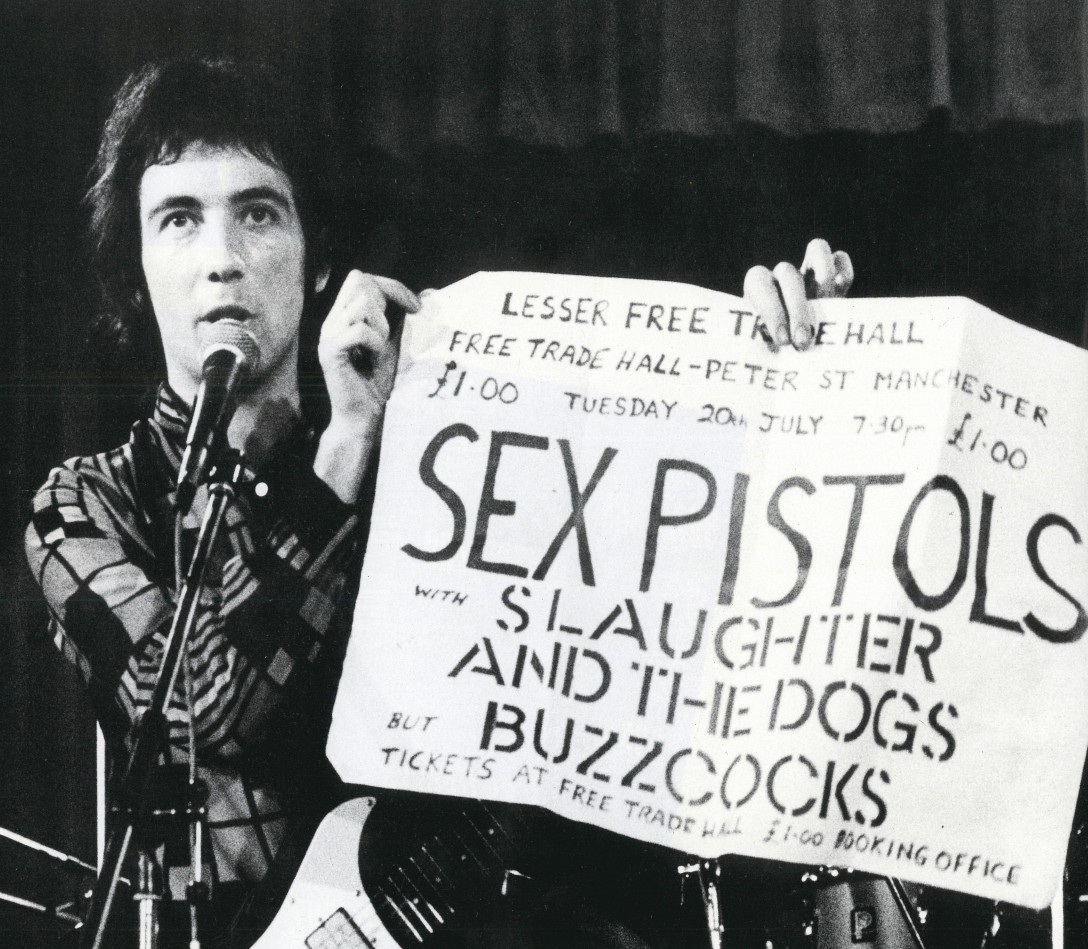 “After we’d seen [the Sex Pistols], Howard [Devoto] and I were sleeping in the living room. As we were going off to sleep, Howard was quizzing me, like if we got our band started, what was my commitment. Would I stick with it? Was it a hobby or was I into living the life? And I said: ‘Yeah, I’m into living the life.’” – Pete Shelley, England’s Dreaming.

Following news last Thursday of the passing of Buzzcocks singer and guitarist Pete Shelley, aged 63, GIITTV would like to offer some words in honour of the legacy he leaves behind.

Along with Howard Devoto of the same band, it was Pete Shelley who conspired to bring the Sex Pistols to the Manchester Lesser Free Trade Hall in June 1976 after seeing them in London earlier, a gig that changed British music history often credited as the origin of Joy Division, the Fall, the Smiths and Factory Records to name a few. Yet the Buzzcocks are constantly overshadowed by their peers when viewed through the lens of pop history – unfairly so. Shelley and the Buzzcocks gave a face to punk that others would struggle to, merging the Pistols’ punk, impenetrable to the masses, with pop sensibility uniquely melodic, bright and clever, uncheapened by attempts to dumb it down or declaw for the curious public.

They were rewarded with some of the signature tracks of the era, always mentioned but rarely examined. The understated brilliance of ‘Why Can’t I Touch It?’ for one, conscious of its own metalanguage with chiming call and reply guitars, yields just a glimpse of an often underestimated back catalogue. The Buzzcocks succeeded in something few bands of the era would: they alone would punk the personal, unyielding to the softness others would affect and uncompromising in their angular, fizzing, krautrock arrangements. Lanky, smart-talking Shelley captained this feat, fluent in a darting cross-talk that implied far more than most of the listening public could catch at the time.

In light of the smothering pall that settles across bisexual identity, especially when it’s assumed by men, the courage implicit in Shelley’s music and lyrics and in his choice to come out as bisexual in the early 80s cannot be understated – Shelley’s 1981 synth-pop solo single ‘Homosapien’, which made this inclination explicit – “I’m the shy boy, you’re the coy boy…” – preceded the first recorded death from AIDS in the United Kingdom by a mere three months and was banned by the BBC for “Explicit reference to gay sex”, despite its success in the dance charts.

With titles like ‘Orgasm Addict’, ‘Love Battery’, and ‘Ever Fallen In Love (With Someone You Shouldn’t’ve)?‘ (famously penned about a young gentleman, the Warrington Tech social secretary ‘Francis’) a band called the Buzzcocks would have been overt in its homoeroticism against any other backdrop; but punk, so ready to flirt with ambiguity and undesirables in its leopard print and leather lifted from the sex workers of New York and London, added a veil of plausible deniability that many would take advantage of. Shelley, however, was cutting close to this shroud with his sheer sincerity – “I never knew there was a law against sounding vulnerable,” he elaborated in 2009, and in his music Shelley could speak directly to those hiding in their own ambiguities.

Unafraid of pansy-ism, from his stage name (adopted from the name he would have been given if he had been born a girl) to his stuttering, reedy delivery, Shelley’s wiry, gawking image shrugged off the awkward posturing of criminal cool or needlessly edgy punk otherwise assumed. The political was personal, the personal political. If Shelley was, as he claimed, “the shy boy”, then his audacity must be lauded; where his fellows issued retractions or retreated behind smokescreens, Shelley never withdrew, and through it ought to be remembered for his courage in a difficult and shameful period of British history.

Beyond all this, of course, is the outpouring of love for the man behind the history. Again and again, we see the same portrait of Shelley cast by those who knew him personally: an intelligent yet down to earth and cheerful man, humble in his success, brilliant in his music, and unhampered by the pretension so many of his peers carry with them even today. Fans who revisited the Buzzcocks on their reunion tours in the last few years repeatedly echo the same sentiment – to the end, Shelley was a performer who gave his music the life and energy it had earned over five decades of influence. Doubtless it will continue for many to come.