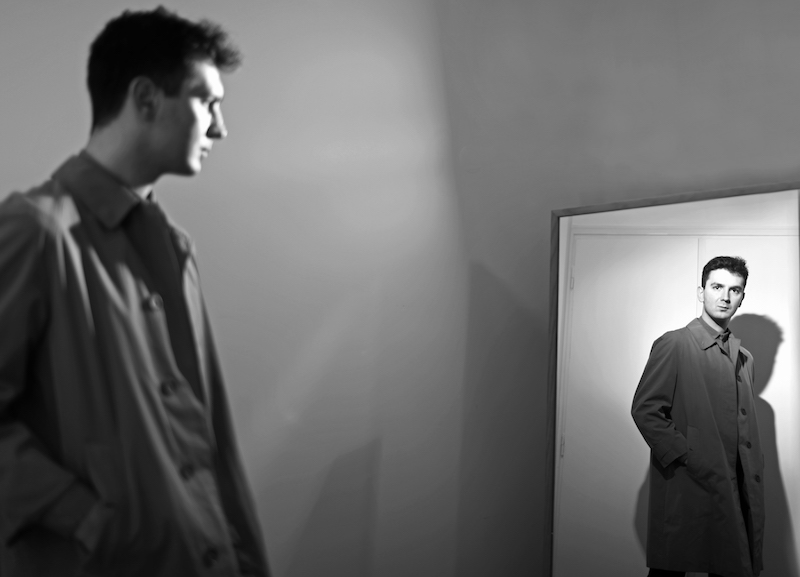 They say? Istanbul synth-wave vanguards share new single from upcoming LP. ‘Yangın’ (literally translated as “Fire”) deals with the feeling of being stuck and going in circles, singer Kutay Soyocak remarks “My life is in a process of development and I am trying to go somewhere I would like to be. As this process goes on, a personal defect of mine distracts my attention and all of a sudden, I start watching it and that stops me. I am getting passive.” The visuals reflect this, showing Soyocak stuck in a seemingly bugged reality.

Why we love it? Turkish duo Jakuzi made one of the albums of 2017 in Fantezi Muzik. Now they’ve  returned with the first taste from their next album and its another brilliant offering of driving synthpop. ‘Yangin’ combines all the best elements of 80s inspired electro/disco and new wave and wears them proudly on sleeve, much like the band’s visual presentation of their own sexuality. Even though the tracks’ lyrics are in a completely different language (captioned in the music video) it’s hard not to feel an instant emotional connection to the music – melodic, instantaneous and accessible without ever becoming tiresome. As its title suggests, this track is literally ‘fire’. (NK)

They say? “‘Lady Solinas’ is a satirical take on the story of Andy Warhol’s shooter, Valerie Solanas (Warhol’s writer of the screenplay “UP YOUR ASS”, also the writer of “SCUM Manifesto”). The story is used to consider the power of passion in artists and its effect on their mental condition. Although the lyrics hold a serious message, the approach to convey it is ultimately comedic.”

Why we love it? The cool, brattish, garage rock swagger of ‘Lady Solinas’ sees Montreal five-piece, Pottery, channelling everything from The Velvet Underground to Television. Guitars bend, chug and splutter out riff after riff in this rock solid jam, defined by a clever lyrical narrative. (NK)

They say? Speaking of the track, Glows says: “It’s quite a bittersweet one for me, one for the early mornings in winter months when you are on your own, remembering a conversation from before, or trying to make sense of happy or painful memories. Thats the joy of instrumental tracks, they allow reflection, there’s a melancholy to it.”

Why we love it? On ‘Passing Talk’, Glows take snippets of Aphex Twin’s genial ambience and Mount Kimbie’s carnival atmospheres and mould it into a pulsating, widescreen soundscape. The track sails atop clouds and floats like feathers, underpinned by clicking beats and soothing vocal samples. Daydreaming has never sounded so good. (NK)

They say? Rose Ette – ostensibly modern-day Houston, spiritually Olympia or London from two or three decades back (respectively) – the mental hurdles that block both parties from honest and true bonds are real struggles worth fighting for. With their proper debut Ignore The Feeling, our four romantics (led by singer/guitarist Teresa Vicinanza capture those challenges in a bell jar; even manic obsessions and unwanted stalkers shine with the opal glow of Lush, or Camera Obscura, or any of your favorite C86 tapes from your lost (or invented) youth.

Why we love it? Marrying the jangle of Postcard records with the sweet smell of girl groups and C86 tapes of yore laced with a effortless melody and neat riff that gets under your skin. Rose Ette deliver a delightful soundtrack to a sunny morning. (BC)

They say? ‘Tears’ comes accompanied by a lyric video featuring the branding of the shadowy ‘WWAYH’ (WE WORRY ABOUT YOUR HEALTH™) organisation whose darkly funny automated phoneline interludes are peppered throughout the glorious Miss Universe. The mind department of WE WORRY ABOUT YOUR HEALTH™ issued this statement: “Despite previous claims of crying being natural response to stress and regarded as healthy, recent studies have unearthed evidence that proves this claim as untrue. It can also simulate similar responses in others to varying degrees, primarily targeting the vulnerable (infants, children and elderly) which makes it a socially irresponsible behaviour. The Body department would like to add it is also a waste of bodily fluids and self destructive to one’s health hereby deeming the act of crying illegal.”

Why we love it? Nilüfer Yanya continues to show her worth with latest single ‘Tears’ taken from her debut album Miss Universe (due out March 22nd). “Hold back those tears/hold back your fears” sings the 23-year-old, over an evolving palette of sounds that twitch and shift into a sunny pop delight. Its a fresh take on guitar-based indie pop music that proves that the instrument still has legs in a world of laptop-reliant artists. (NK)

They say? Founded by talented musicians, Aimy Miller (vocals/production) and Simon Atkinson (synths/guitar/production) – who both have had successes in metal bands – their music will make you cry on the dancefloor. This is summertime pop drowning in melancholy and a certain new direction from the duo.
Speaking of their debut single, ‘Control,’ a song about a feeling of lack of control, SADSUN explains, “Control is about the suffocating feeling induced from overwhelming routines and the responsibilities that day to day life can bring on. When you’re drowning in feelings of pain with the weight of life tied at your feet, you can lose all purpose and control of your life.” (BC)

Why we love it? Dark, intriguing synth sounds from the underbelly. Elusive and addictive vocal harmonies that grapple with a suffocatibg powerlessness slide up and down iridescent keyboard prods and sythnetic backdrops that flash like neon advert billboards from a Bladerunner film.

They say? “Events can leave an emotional stain on a place, ‘Heal’ is about trying to live with those ghosts.”

Why we love it? Expansive, stark and highly emotive, Tarantina’s latest single ‘Heal’, certainly leaves a mark. There’s a bare, ghostly minimalism to this piano-based ballad, which recalls the more fragile moments of artist’s like Daughter and James Blake. (NK)

They say? “Merely is the classically trained musician Kristina Florall. Inspired by fantasy and influenced by the likes of Kate Bush and Cocteau Twins, Merely just released her new album Hatching The Egg on Feb 15th via YEAR0001 (Yung Lean, Bladee, Viagra Boys).”

Why we love it? Haunting and evocative, the tapestry is a bricolage of samples and synth washes with a subtle sound that rustles with the ghosts of 4AD records, Merely’s shivering voice radiates with intrigue and loss forging an evocative atmosphere that hangs heavy on the heart. I am fascinated to hear more.(BC)