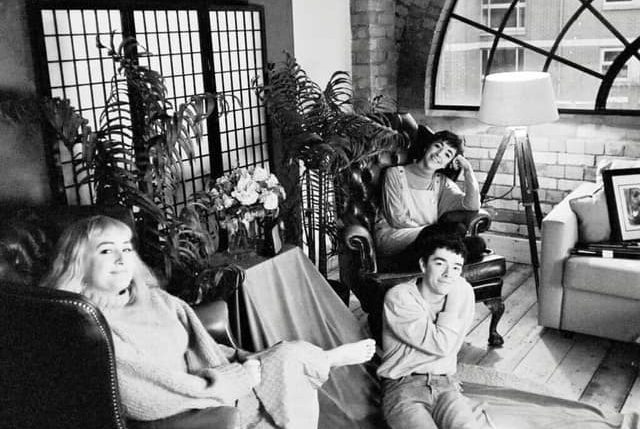 What they say? Cardiff four-piece Rosehip Teahouse (Faye, Tony, Kristy & Will). Formed by Faye Rogers (Guitar & Vocals) back in 2015 and playing only a small number of house shows and DIY gigs, Rogers crafted these subtle and delicate songs, which command your attention, from start to finish. Recorded DIY style, using any means possible, Rogers was later joined by friend Will Dickins (Drums), who
heard these tracks, and was in awed immediately. The two began to create music to soothe the soul, and since the early Bandcamp singles, have formed a densely layered, full band with Tony Williams (Guitar) and Kristy Cromwell (Bass), playing several intimate shows in and around Cardiff.

Their first single as a full band, ‘Same Sky’ will be released via Hampshire Indie label Beth Shalom Records, founded by singer-songwriter Joe Booley back in 2014. The band will be playing several festivals over the Summer such as Wales Goes Pop, Focus Wales and Indietracks.

‘Same Sky’ will be released digitally on Friday 15th March 2019 via Beth Shalom. Following this a double A-side 7” to be released around a May tour.

Why we love it? ‘You know I love your ankles as much as your face/but you’ll find someone else’s eyes to care about’ is on the face of it a slightly unusual proclamation, yet set to this gleaming wistful indie-pop gem, that encapsulates like gazing longingly into your crush’s eyes, its a swooning delight. A catchy paean to unrequited love, ‘Same Sky’ makes you feel as snug as being wrapped in a blanket next to a roaring fire, it’s a soundtrack for hopeless romantics everywhere. There’s a subtlety to these bars, glistening guitars, weaving percussion, balancing shiny indie pop redolent of Sarah records against the more nuanced influence of recent American songwriters. While Faye Rogers delicate, bittersweet yet wonderous vocals and effortless songwriting knack for melody and lyrics, mark Rosehip Teahouse out as the sweethearts we need! (BC)

What they say? Skinny Pelembe is back with ‘No Blacks, No Dogs, No Irish’, a standout, melodic return which binds an airy, engrossing texture with chanted lyrics and a taut guitar line. It was a period a few years back, where he repeatedly experienced xenophobia and racism, which planted the seed for the song. Johannesburg born, Doncaster raised Skinny says of the track “I feel like the best thing you can do with hate speech is take it, re-contextualise it, and use it as a positive weapon.

The idea for the track started in 2013, when a soldier was brutally killed on the street in the middle of the day. The racial tension afterwards, left a definite atmosphere of hostility in the UK, certainly with no help from a divisive media. For the next two weeks, nearly every day on the way to work somebody would tell me to go back to Pakistan, Iraq, Africa, (people tend to have a hard time placing my ethnicity).”. He returned to it last year, adding field recordings, and a synth line that nods to a West London broken beat bounce. “With this track, I just wanted to flip a memory of an upsetting situation for everyone involved, and turn that energy into something that can bring people together and uplift them in the dance.”

Why we love it? Skinny Pelembe’s Afro Psychedelic Soul is made all the more intriguing when coupled with the racially charged underpinnings of its lyrical content. At a time when BME communities are facing more hate than ever (no thanks to British media spin), Pelembe’s existence is vital – speaking up about big issues via progressive rhythmic patterns and sporadic, evolving textures. (NK)

What they say? Jelly Boy has shared ‘Lavese Los Manos’, the latest track drawn from his hotly anticipated upcoming debut EP Everybody Is A Universe. Explaining the meaning behind the airy, Elliott Smith-like ‘Lavese Los Manos’, Jelly Boy instigator Benji Compston said, “I met a guy once who told me how he once lost something precious down the U-bend of a sink and assumed it was irretrievable, only to have a more practically minded person remind him what a U-bend is for. I guess that’s what this song is about. I also compulsively wash my hands and like Lorca.”

Why we love it? Jelly Boy’s latest rattles along nicely as a sunny, slacker pop tune that would best accompany a cross-country roadtrip. Sometimes all you need is something this simple and catchy. (NK)

What they say? Attention all goth kids, pop princesses, darkwave divas: the new sound still isn’t rock and roll. At least not to Shouldies, a synth punk trio consisting of Yancey Ballard, John Pierce, and Daniel Eberlein, on a mission to fuse dance with a relatable dose of realness — but make it goth. The group rose from the ashes of the Atlanta music scene in 2017 to serve darkwave to the buttcracks and crevices of the city’s sprawling highways and bigots, dance on the ghost of your face as you sit in the 5 o’clock traffic, whisper in your ear when you frequent, yet again, that bar with the shitty men. With lyrics that sound like the most profound page of your emo phase (but make it political), Shouldies layer earnest pacing over a soft fury of synth.

Why we love it? At a mere 1 minute and 19 seconds long, Shouldies’ ‘Bed’ is a quick-fire shot of weirdo dance pop. Synth’s gurgle atop a rumbling 808 beat, which creates an oddly funky and infectious mood that is all too abrupt and inevitably leaves you wanting more. (NK)

What they say?  ‘July’ first single off upcoming Night School LP for Graveface Records. The sunny track was written by Alexandra Morte as a message of empowerment for her 12 year-old daughter.

She tells Billboard, “I just wanted to write a song that encouraged her to speak her voice and express to her that she has a voice and that things she has to say really matter. It’s important for young women to hear that message, especially now. They need to speak out and be heard. So in a sense it’s not only for her; it’s for any young woman that feels like they don’t have the courage to speak out.”

Why we love it? Moving away from their initial love of 60s bands like The Crystals and The Shangri-las, Night School’s latest sees them polishing and refining their sound. Reverb and distortion heavy, ‘July’ still retains the duo’s fuzzy rock sensibilities but the melodic guitar-lines feel a lot more pop. (NK)

What they say? Brighton’s rising quartet GURU burst onto the scene with explosive debut single Consumer Helpline late last year, the band’s follow-up Suntrap marks their latest foray into their own brand of punk, upping the ante with pounding drums, cutting guitars and formidable bass.

The four-piece clearly have something to get off their chest in this, the latest iteration of what is fast becoming their signature sound. Following their debut release, the Brighton upstarts will be hitting the road alongside Lady Bird on an extensive UK tour.

Why we love it? Urgent, visceral punk from Brighton. discordant guitars that sound like a fighter jet taking off rasping lyrics rattled out like a shopping list of grievances, focussing on the subject of social inequality and the plight of those under the hammer. (BC)

What they say? The first single from Tusks forthcoming second album ‘Avalanche’. She says “I started writing this track last June when I was outraged by the MP Christopher Chope blocking the upskirting bill in UK Parliament. It tipped me over the edge of being so angry with how ingrained sexual harassment and gender inequality still is in our society so it all came out in a song and to be honest, I finally feel like I’m writing about something with meaning. (Bonus points if you can guess which previous Tusks track was sampled in the intro) Anyway I love it and I hope you do too.”

Why we love it? Haunting yet with a industrial undercurrent, a tapestry of synths reverb-drenched textures. Peachy Keen bristles with a dark tension inspired by gender inequality, that releases in a swell of percussion, ominous bass lines, serrated guitars and Underhill’s piercing vocal. (BC)