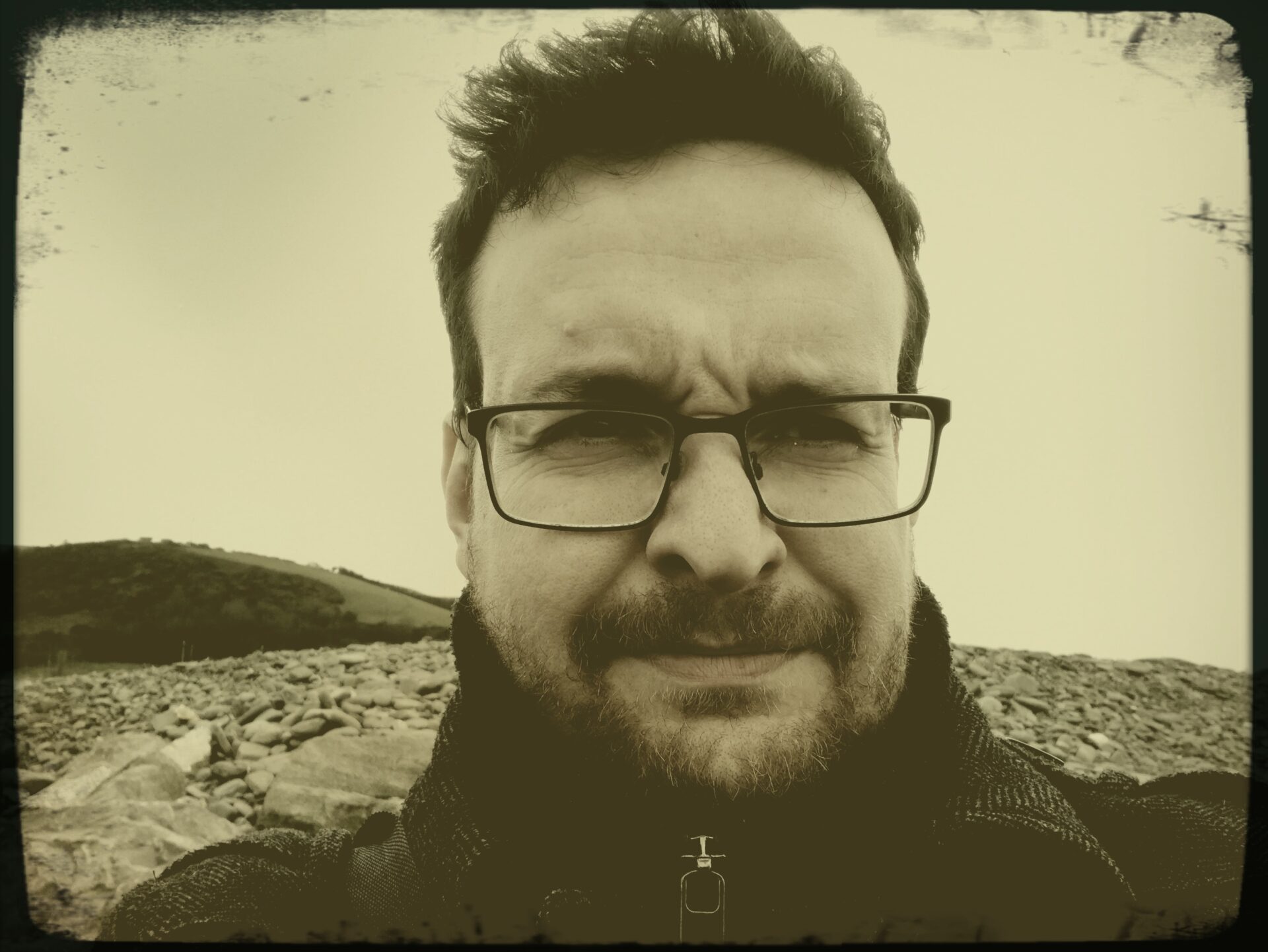 A Congregation of Vapours, the new album by Ratatosk is an eerie, experimental folk album that explores desolate landscapes, failed harvests and other tainted idylls.  Available now via bandcamp, it’s the latest project from guitarist and producer Rhodri Viney of cult post-rockers Right Hand Left Hand.  We caught up with him for a coffee by Spillers Records in Cardiff to talk about folk horror, Nazi holiday camps, Scott Walker, Brexit and squirrels.

GiitTV: Right, let’s go.  I must say, A Congregation of Vapours is an amazing album.

And I’ve been very moved by your increasingly desperate and amusing pleas for publicity on Twitter.

Yeah, it’s a bit of a one-man media campaign.

So what’s been the delay with getting it ready?  You said on your Bandcamp that life got in the way.

Yeah, pretty much that really.  Got two kids, my girlfriend’s gone back to uni, some I’m just recording here and there.  But just occasionally I’ve lost the enthusiasm so I left it for a month or two and then got back to it again.

So how is the Ratatosk project different this time?  Has it moved on?

Yeah, kind of.  It’s not about being able to play the songs live.  This album and the last one as well I can’t really do it in the same way.  It would just be me playing acoustic songs stripped of all the production and that’s the stuff that interests me really.

It’s a very eerie sounding record.  How do you go about creating that atmosphere?

Lots of reverb (laughs).  Yeah, just tinkering with it really.  I like using field recordings, like background things.  There’s quite a few songs with recordings of the sea.  There’s something there for a lot of the songs.  I used a lot of wind recordings as well.  Like a howling, desolate scary landscape.

So where did you get the name Ratatosk?  I kind of know because I looked it up on Wikipedia.

Is that some kind of mission statement?

On A Congregation of Vapours, a lot of the songs seem to be preoccupied with ecological collapse and decline.  Was that in view of political events that have happened over the course of creating it?  Was that something you became more or less conscious of?

It’s not strictly ecological.  It’s more a general personal decline and decay as well, as a lot of it was based on the feeling after the general election when the Tories won a majority, which I found hard to believe and then after that Brexit happened, which I also found hard to believe.  I felt like I didn’t really know as much as I assumed.  I think a lot of people felt like that.  Initially, they were very explicitly about those things but I don’t like writing explicit songs, so I kind of rewrote the lyrics and wrote them again and again.

‘The Year Without a Summer’ was based on the year that had catastrophic weather due to an erupting volcano.  It’s mainly remembered because Frankenstein was written during Mary Shelley’s rainy holiday, and for causing attractive sunsets painted by Turner.  No one seems to talk about the global famine that happened.  ‘Harvest’ also has a similar theme, taken from Akenfield, a great film and book, about an idealised nostalgic version of the past, even though life was indisputably more difficult no matter where you lived.  See also Brexit, etc.

There’s one song ‘Halting Time‘, which is a Brexit song.  I think if you listen to the lyrics with that in mind then it makes sense, but there’s a wider set of vague feelings there.

– the day after they’ve burnt the policeman –

and it’s starting to sink in like maybe this isn’t going to do us any good.  Would that be a fair kind of critical assessment of where you’re at?

That’s an ideal critical assessment.  Absolutely.  That’s perfect for me.  I love The Wicker Man and I love the soundtrack anyway, so the fact that yeah (laughs) full of regret afterwards, yeah I like that.

The Wicker Man I think is the ultimate Brexit movie.

In many respects, Edward Woodward is this remainer, this establishment figure –

‘Killing me won’t bring back your apples.’  Well, of course, it won’t.  I also like that line from Father Ted which occurred to me yesterday, ‘Is there anything to be said for saying another mass?’ At that point why not burn another policeman after the first?

I was going to ask you more about folk horror and things like that, is that something that you’re interested in?  The first song in particular, and ‘The Harvest’ as well.

It’s very much a quote but its a quote I’m very on board with, that kind of eerie.  Alan Garner, people like him.  There’s kind of a new breed of it as well.  Influx Press do a lot of books, location-based books.  There’s one called Ghosts on the Shore by Paul Scraton.  He’s an English writer that’s living in Germany, and his writings are about travelling the north coast of Germany, between Denmark and Poland and it’s so well written.  It’s so evocative.  So there’s little bits of history as well.  There’s a couple things on the new Right Hand Left Hand album about Prora, that insane Nazi holiday camp that they built on the north coast.

Yes, it’s a Nazi-designed holiday camp. Holidays for the people, and it’s the most obscene Brutalist, Nazi building. It is just insane.  But then he writes about this as well, almost the abuse of landscape.  So that was like a natural fit.

(Rhodri shows me a picture on his phone)

Well, that could be Cancun, couldn’t it really?

The buildings are still there and they’re mostly abandoned but now they’re turning it into a museum and lots of artist workshops and things like that.  To get something positive to come from it other than tear it down.

So the song Harvest is dedicated to CL Nolan, which is quite an esoteric reference, to Hookland.  Would you like to enlarge on that?

I don’t know how much to go into it because I want to be quite respectful of Hookland.  They have this whole thing about CL Nolan and he’s popped up in other writings as well.  Gary Budden is another good writer who’s done a few things where CL Nolan’s popped up in passing.  But he doesn’t exist.  He’s just a fictional kind of arcane writer based on this mythical county, so I don’t know how much to go into that.  He’s overtly fictional and that’s what it boils down to.  But also tapping into that – the guy behind it, when we corresponded on Twitter before, said that some of my songs would be a good fit for it.  And then on the song ‘Harvest‘, it did occur to me before even writing it.  I wanted something very percussive, from things I found around the place – like banging boxes of slate together, a cleaver on a chopping board, all slowed down so it sounds really ominous.

So some final questions then, are you going to be playing the Ratatosk songs live anywhere and where can we catch you?

I am.  I had no plan to, but I was asked to play the Machynlleth Comedy Festival.  Right Hand Left Hand played there before it’s a lovely place.  I get a gig at lunchtime which is ideal for me, and play 4th May I think.  And then Cardiff Psych and Noise Festival.

So Right Hand Left Hand is obviously a very different deal to Ratatosk, do you see any sort of continuity between the two projects?

Yeah pretty much.  Initially, there was more looping and Ratatosk live performances worked for me with looping in the same way as Right Hand Left Hand, just with different instruments, like the musical saw and harmonium.  I think I might have moved it away a little bit.  I’ll still be using both things really so there gonna be a line carrying through from it.  Ratatosk initially was also a way of trying out ideas before taking them to Right Hand Left Hand.  ‘Broken Hill‘, the chord sequence in that was initially a Ratatosk song, which is on one of the early albums as well, Archipelago.  And it was just me trying out demos at home that ended up online and were repurposed for Right Hand Left Hand.

Broken Hill is a favourite.  You know you have to play that.

Yeah, we know that.

We played it at the last gig but that was in London.

So what can we expect from the next Right Hand Left Hand album?  And when approximately will it be due?

It will be out later in the year.  I can’t say any more than that right now.

A final couple of questions, just answer as fully as you would like to.  Folktronica or electro-jazz?

Neither.  Nothing against that type of music, but I’m not a fan of either label.

Twin Peaks or Sapphire and Steel?

A hawk or a handsaw?

Both.  I’ll have any Scott Walker album you can throw my way.  I have to say he is one of my absolute favourites so I was devastated last week.

Yeah, it’s so sad.  I was listening to Soused and it’s … the fact that there won’t be another record like that.

I know.  I was thinking he was kind of due another one, based on his solo schedule.  In his lyrics book Sun Dog there are a couple of new songs.  Whether they’re recorded or not I don’t know.

Last question then, what music have you been listening to lately?

Seriously, Scott Walker.  I went through phases every few months of listening to nothing but Scott Walker.  I’m that on board with it.  Something that did influence a lot fo the sound of the album, just when I was finishing it off, I read Jeanette Leech’s book on post-rock, Fearless, which is amazing, really good and it kind of reminded me of a lot of my favourite records, so Bark Psychosis –

Oh, they were amazing yeah!

Disco Inferno, that kind of thing. Billy Mahonie who are another post-rock band. A bit more recent. Bark Psychosis in particular. The sound of those records is amazing.