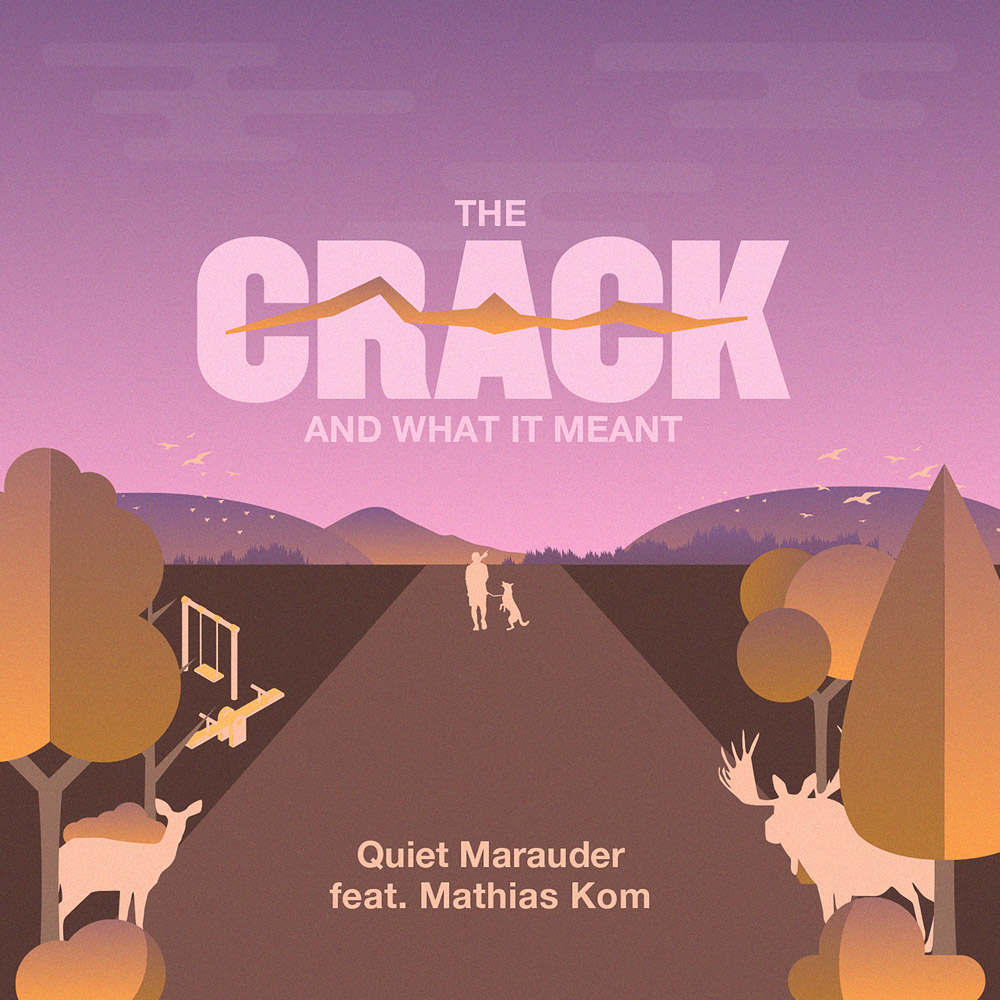 Welcome to the world of Quiet Marauder, a Cardiff-based wacky collective of musicians, quirky British pop experimenters in the best tradition of the Bonzo Dog Doo-Dah Band, Frank Zappa and Half Man Half Biscuit. Powered by the songwriting duo of Simon M. Read and Jonathan Day, Quiet Marauder is “a loose collective contributing kitchen utensil percussion, trumpet, tenor horn, melodica, multiple guitars, Thai saw, layered vocals and anything else that comes to hand.”

Quiet Marauder don’t make things easy for the hapless reviewer. Their first release was a whopping 111 tracks, and this one is a modest 30 songs long.

The Crack and What It Meant then, is a concept album of sorts, a light-hearted story about a ‘crack’ in time and space opening up in the rural suburbs of Kent. From this rather silly concept originates a release that’s ambitious in range and stylistic diversity, addressing  politics, science, commerce, mass media, religion, and more, all without taking itself too seriously. Mathias Korn of Canadian indie-pop wordsmiths The Burning Hell, narrates about half the tunes, stringing together the various songs with something resembling a story line. His baritone voice, dramatically underlined by cavernous reverb, makes you smile as soon as you hear it. You half expect John Cleese to jump from behind a bush in his underpants, yelling  “and now for something completely different”.

As a teaser, a hilarious music video for the song “What Happened to Science” was released and it set the tone right away. Zany, Syd Barret-esque, the song pokes fun at the current anti-science climate, ending with two scientists being attacked by an angry mob armed with golf clubs.

A project like this could easily unravel into a chaotic, self-indulgent, poorly thought-out mess best left in the artist’s bedroom, perhaps played at parties for family and friends. But , rather implausibly, The Crack… is a minor feat, an indie pop opera if you will, following  an unlikely story line through a dizzying, hyperactive smorgasbord of musical styles, from pretty acoustic guitar pieces to driving indierock pieces, lush synth pop and more. Here’s a taste of what to expect.

“The Panic” sounds like an off kilter radio hit from the 80s, whereas ‘How to Make a Million Truths” is a pretty, bittersweet ditty worthy of Syd Barrett, who casts a long shadow over this release.  “The Executive Summary” is a pretty string ballad played by robots, and “The Old Faith Is Misplaced” is an excellent indie pop tune carried by interlocking guitars, ending in something approaching  full-blown U2 territory.

‘We Came in Droves” is a rousing sing-along tune complete with triumphant trumpet and a stately choir, possibly one of the most successful songs on this oddball release.

The Crack… is an ambitious undertaking, and it’s got some big shoes to fill. The Who’s Tommy will of course always be the gold standard for any attempt at combining  pop music with telling a story , but I’m also thinking of Side Two of  the Small Faces’ masterpiece Ogden’s Nut Gone Flake.  The Crack… definitely has some of the zaniness and musical eclecticism of that great album.

I must honestly admit to not having the patience to unravel the various story lines in this album. Sometimes The Crack… veers perilously close to self-indulgence, but self-effacing humor and tongue-in-cheek observations save it from going down in flames. Still, a little more self-criticism and some dogged editing could have made this into a very enjoyable release. Instead, The Crack…gallantly tries to break new ground and make a poignant statement about our world through a silly story and lots of musical ideas, but only partly succeeds.  There are plenty of moments of brilliance here, but also an awful lot of filler. In the end, exhaustion sets in. Maybe thirty songs is just a tad much?

The Crack And What It Meant is out now on Bubblewrap Collective.