Quiet Marauder follow up 2020’s ‘Tiny Men Parts‘ EP with new album ‘The Gift’, out on Friday, through Bubblewrap Collective.

In an unexpected yet fruitful turn of events, the record sees the band’s backing vocalist Kadesha Drija take on lead vocal duties for most of the multi-instrumental acoustic-folk songs on it.

Returning to the conceptual songwriting approach of previous releases ‘MEN’ and ‘The Crack and What It Meant‘, The Gift charts the narrative of a troubled teenage girl (Willow) haunted by visions of a mysterious house fire. 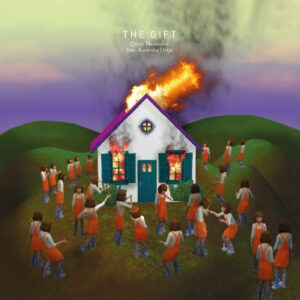 Where did the idea for Willow come from?
It was a combination of things really. From the initial conception of the idea in Manchester, as I say, a lot of the story and characters were outlined, but there were still considerable gaps in what happened to her and what the ultimate outcome of the story would be. My (false) recollection of the (non-existent) TV show that inspired the album was that the main protagonist was troubled and that their visions of the house fire were a symptom of this. So aspects of the character such as them being in the social care system and having foster parents were incorporated to reflect those issues, and also to loosely draw on my experiences of researching with people in these kinds of situations which I had been doing around the same time in my guise as a daytime sociologist.
How did you as a man approach writing from the pov of a teenage girl, or charting a female narrative?
It’s something I was very conscious and wary of, to be honest. I was quite keen not to deviate too far from the storyline in the writing and, I think, by doing that, the experiences being outlined are fairly free from specificity in terms of gender. I hope that the themes of the album are kind of universally shared, albeit through a range of different experiential filters: love, loss, family, trauma, identity and memory. I wouldn’t be comfortable writing an album where the central focus was the lived experiences of being a woman, plus I think it would be terribly informed on the matter.
But where the character events within the narrative are less specific to one gender or another, it didn’t feel quite as uncomfortable. And one aspect which did alleviate most of those concerns was that Kadesha was going to be singing the words, as well as adapting them where she felt necessary, and so there was always the view that there would be some validation of the writing from a female perspective before anything went on record.
How did you approach writing / arranging Her Love Interest / His Love Interest in relation to that?
It’s funny that you picked that duo of songs as we worked together more so on those than some of the others. We knew that they were set to follow one another and would be charting this quasi-imaginary, romanticised relationship that may or may not really exist, but either way feels very real to its protagonists. So, in a sense, there was already an in-built idealisation of the flourishings of love from either side in the backstory to the songs, partly from the fact that Willow’s is so painful that she takes whatever comfort she can find, and partly because the origins of the album was a TV show where these kinds of idealised relationships are fairly common and relentless.
So, while we were keen to keep everything fairly subdued lyrically, and not too ridiculous, we were also conscious that if the ‘girl meets boy’ plotting did feel a little bit cliche, then that was almost part of the aim, really.
Writing from the pov of a robot must have been a different experience again, though?
Ha, yes. Though it was really writing from the perspective of a robot who had only just worked out they were a robot, which is another layer of meta. Recording I, Robot? was one of the more challenging aspects of the whole process, simply because it’s difficult to sensitively get across the gradual deterioration of a freshly uncovered robot’s soul. Plus, singing different words over yourself multiple times can be maddening to say the least, until things get mixed. I started getting a twitch towards the end, such was the power of the voices inside my head.
Why is the future orange, of all the colours?
That song title, The Future Is Bright, The Future Is Orange, comes from an old advert for a UK mobile network called Orange. Fingers crossed they don’t mind us nabbing it, but I think they are now defunct anyway so it may be a moot point. It was an initial hint at the commercial technology themes that enter the fray later on in the album. But, also, Ogany’s ‘future’ is literally orange in the sense that he is, at that moment, in front of the glowing flames of Willow’s house fire which will soon engulf him. So it was a two birds, one stone song title!
The distrust of domestic appliances is a very real struggle. I bought a toaster once because it was pink. But it was functionally useless, I kept hoping it would break but it lasted for years out of spite I think. What’s the most rubbish one you’ve ever had and what happened to it?
Haha. I did something similar with a purple DAB radio recently. It looks fantastic but crackles like a stale cereal. But I think my least satisfying domestic appliances have always been hoovers, simply because the gradient from top suction to meandering ineffectiveness is very steep and fast-moving. It feels like I buy a new one every year and suffer the same tragic arc of the honeymoon period very swiftly to betrayal / disappointment. I hope you manage to find a functional pink toaster, there’s got to be one out there!

Listen to The Gift streamed exclusively for God Is In The TV here: