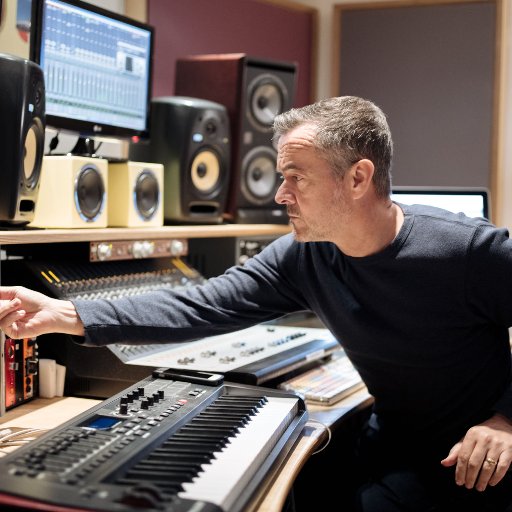 After starting his musical journey playing in bands four decades ago, Stephen Street went on to become one of the most respected and successful producers in the business, working with The Smiths, Morrissey, Blur and The Cranberries amongst many others.  God Is In The TV caught up with Stephen Street to chat about his extraordinary career to date.

GIITTV: Who were your first musical influences?

SS:Definitely, Marc Bolan and David Bowie, as a young man they were the first artists I hooked onto, both inspirational then and still inspirational now.

When would you say you first noticed a producer? I guess it would have been on the Bowie records that the name Tony Visconti popped up on both Bolan’s records and Bowie’s records. I wondered who this person was that made this happen and then I realised that a record producer was kind of like a film director, putting their angle on it. I used to read all the sleeve notes inside out when I was a kid, read all the lyrics and that is also how I started reading about studios, with familiar names popping up from one album to the next and so on. And I used to digest all the information from all the record covers and so on and my interest was kind of piqued, as it were. This doesn’t happen these days with streaming, even on iTunes when you downloaded an album and officially bought it from the iTunes Store, you still don’t get the credits and everything, and I think that’s wrong and it should have been addressed a long time ago.

Obviously you play instruments as well, when did your ambition become producer? Was it always producer, rather than musician?

I did try to be a musician in a band, like most young people do in their teenage years. I was in a band and although we did some recording and so on, I just felt that we were not particularly getting very far and at this time I was very influenced by the late 70’s; there was an upswing of new young ‘engineer’ producers, I’m thinking of the likes of Martin Hannett , Martin Rushent, Steve Lillywhite and all these kind of people and again I had read all the covers and could appreciate what all these people were doing, and these people were all engineers, and they are looking at production in a way of having the technical ability to use the studio as an instrument, rather than tacitly arranging strings and so on, like George Martin might have done. I was enjoying being in a band, and really enjoying the recording side of it more rather than the touring, the live work and I thought if I can get to grips with becoming a recording engineer, hopefully perhaps I could progress to become a record producer, so that is the path I took, I wrote to all the studios that Ipossibly could, and managed to wrangle an interview with Island Records as an engineer there and progressed to being one of the in-house engineers. This is where I got my first big break when The Smiths came in. They had booked the studio, Island occasionally at weekends let outside clients come in and that is what happened, The Smiths came in to record the single ‘Heaven Knows I’m Miserable Now’ and that is the first session I recorded with them as an engineer.

Would that have been with John Porter as the producer?

Yes, John Porter was producing and it was a lucky break. They had booked the studio and the studio manager came to me to say there was a session coming in at the weekend, do you want to do it? I asked who it was and he said it’s a band called The Smiths. And I was like “yeah, too right!”, I was already aware of them and I had seen ‘This Charming Man’ on TOTP. It wasn’t quite as big as the Bowie’s ‘Starman’ but it was still one people talked about. It was one of those moments, so I made sure I did the best I possibly could for them, working on that session, and Johnny and Morrissey liked me and took my number and I was invited back to work with them.

When you did Meat Is Murder with The Smiths, all of you were so young to be producing a Number 1 album in a big professional studio, you must have had an average age of about 25 at the time?

Even younger than that! It was like kids being left alone in the sweet shop. It was fun though; The Smiths were on a roll. You could tell that there was something happening and I was keen to impress and we were left to our own devices really. John (Porter) hadn’t done anything wrong with them and carried on working with them intermittently, recording singles and so on, but I just think The Smiths and I were on the same page, so whilst the band were coming out the studio, I was setting all the mics up, I would always get a couple of reverbs and delays patched in on the desk, so was getting a “sound” whilst they were tracking. I chose a particular reverb with a snare, depending on the vibe of the song. I always remember on ‘Well I Wonder’, there was a sound on the snare that I wanted to use, it was quite an aggressive gated sound but it kind of worked on that song, ironically, as it was quite a gentle song.

I remember being blown away by ‘Well I Wonder’ because it came out on the B-side of ‘How Soon Is Now?’ before the album came out…

It’s one of my favourites from that album, so yes, it was a great time. If I listen back to those early records I did with them now, I wince a little bit and say “I could have done that better”, because you never stop learning, even to this day. But that is what I like about making records, it records a certain moment in time and that’s it, it’s done, you know.

That is one of the questions I was going to ask – are you able to enjoy listening to music that you have produced for enjoyment?

Yeah – sometimes. I think when you are recording a record, you think it’s the best thing you have ever done and then you go through a period of not enjoying listening to it so much, and then you enjoy it more when you don’t hear it for a while, like on the car radio or coming out of a shop, I think it’s because you don’t dissect it. You spend so long with your head between the speakers trying to dissect it and then don’t really enjoy it; you enjoy it more when you don’t expect to hear it.

How do you tend to listen to stuff at home, what is your preference?

I still have a fairly decent hi-fi, which I have had for years. I still like CDs, I think they sound great; there is a lot of nonsense going around about compact discs, saying they are rubbish. If you have a good compact disc player, you get far less distortion than you get on vinyl. I think there is a lot of nonsense, and I have a CD player at home and there is a record that I have been working on, and the CD sounds incredible. It was such a big difference.

I do think the CD might have a renaissance in the future, like vinyl has at the moment. I think it might, but I am often wrong on these things, but we will see…!

The thing is, it’s the convenience. You carry (music) around with you on your phone, play it in your car, whatever. But I still feel that owning something and holding it in your hand is better. The tactile experience is better with vinyl than anything else. But sound wise, CD can often sound better.

If you were describing the art of producing, what would you hold up as the perfect example or an excellent example of a well-produced record?

The job that George Martin did with The Beatles was incredible, that is something I still hold up very highly. I also really love Visconti’s work, particularly with Marc Bolan. If you listen to the groove on those, the way he caught the sound on those T-Rex songs, the vibe of the rhythm track is just so superb. It’s so well mixed and balanced. Tony would often bring in strings and use them in a way, on top of the sort of basic boogie that Marc would do. It was very, very clever, I thought, it was so tastefully done. Then you have the fantastic Motown records, the production on those is superb. ‘What’s Going On?’ by Marvin Gaye, the vibe on that is just incredible. It’s a 16-track and it sounds beautiful. Sometimes when you are feeling a bit down and you put a record on, and you listen to that and it is a real lesson.

Is there one of your own that you would have as an obvious favourite?

It’s hard to say really. I think out of the Smiths tracks, I think once we got to Strangeways Here We Come, I thought I was getting a really good grip on the production on that one.

Well it’s the bands favourite, by all accounts…

I think it’s Johnny’s as well. I think it chops and changes from day to day. I’m very proud of the Pete Doherty record that I produced, about 10 years ago now. (Grace / Wastelands). Yes, knowing how it was kind of a tricky path making that record, I’m just pleased with how it all came together and I’m very proud of that. It’s standing the test of time.

Was the mutual appreciation of Queens Park Rangers anything to do with it?

Ha ha, I think it may have helped slightly but I don’t know if he goes to games as regularly as I do now, I’m very much a season ticket holder. It’s always a challenge working with Peter, but there’s a great singer and songwriter there and I’m very proud of the records I have done with him.

(Babyshambles’ album) Shotters Nation is making a reappearance isn’t it?

They have just done a ltd edition reprint on vinyl, I don’t think it was ever released on vinyl when it first came out, I might be wrong but I never got a vinyl copy of it! They have just done a limited edition marble grey vinyl version, and I ordered that myself as you don’t get a copy for free from anyone these days!

Part 2 of the Stephen Street interview will be published soon.