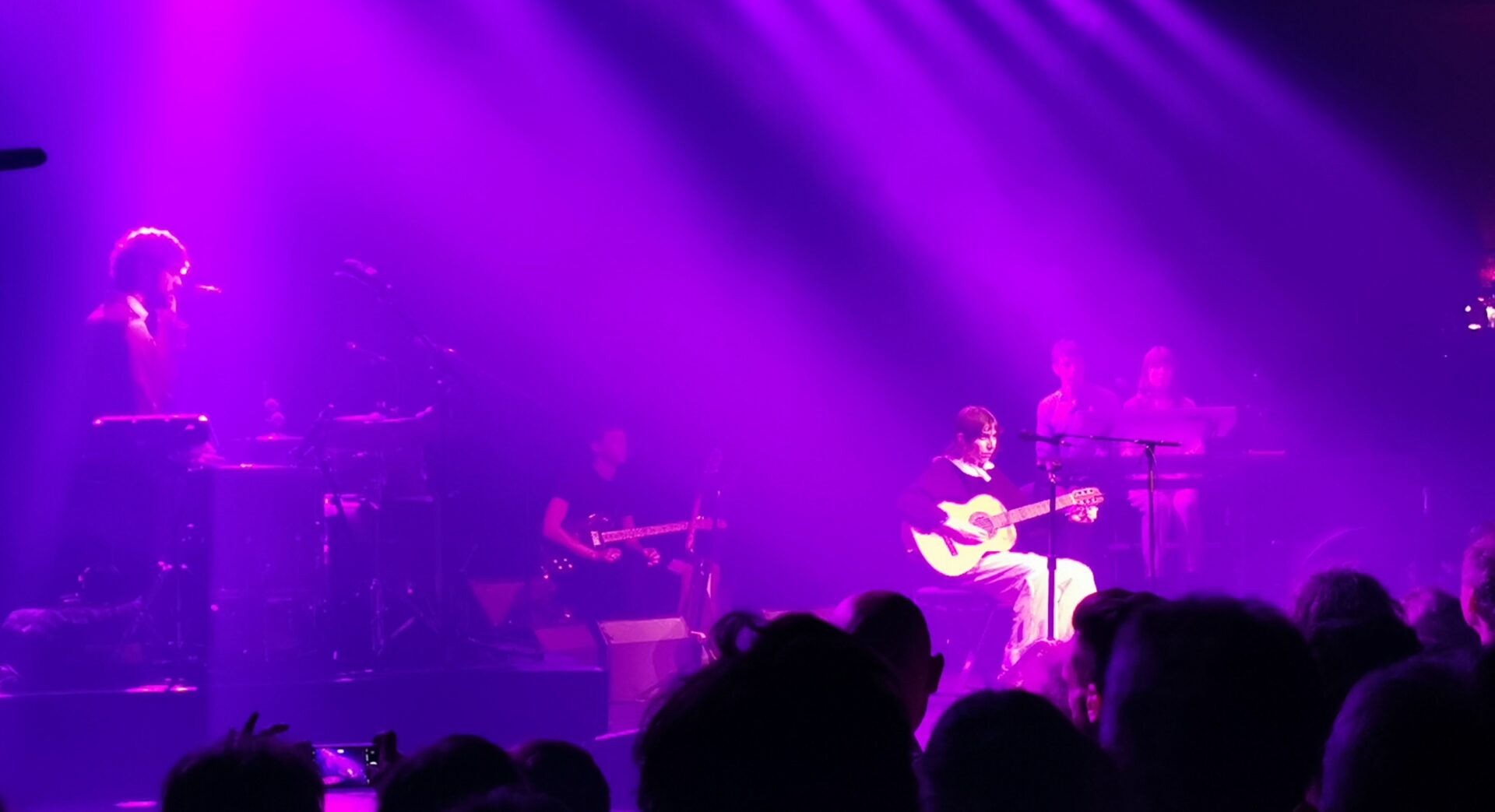 Leave your chitter chatter at the door. It’s time for silence.

The eccentric New Zealand native who has found refuge and home in Britain is due on stage and there is a murmuring anticipation.

Aldous appears without fanfare, without a sound, except for the audience. She exudes respect, majesty, a caricature on stage, exaggerated facial expressions, twisted mouth, eyes out on stalks.

To begin, it is only her, hunkered down on her stool, Spanish guitar resting on her leg. She plays ‘I’m So Sorry’ and ‘Living the Classics’ from her second record, 2017’s Party. They are delicate and quiet and it is a lesson in self composure and the ability to not talk.

Thankfully this audience know what to expect and besides the odd loud talking voice from someone presumably hard of hearing or so self involved they aren’t aware of what is happening or how loudly they are talking. This is not the place for that kind of behaviour. Steely glances and the odd exclamation for silence are enough.

The vast majority have a zero tolerance for bad gig etiquette, and later on in the evening someone dares to record a portion of a song and was met by a whipped scarf to the back of the head and a curt “I don’t want to watch this through your phone” and the device was back in the perpetrators pocket.

Many singers are described as ethereal but there is something very other worldly about Aldous Harding. She barely speaks but when she does it is with a dead pan delivery that has a dry humour whether intended or not. At one point she looks up and surveys the crowd and announces “I am quiet because I am focused” but this naturally is amusing. It is very hard to tell if she is being serious, if this a stage persona that is contrived or is just where the music takes her. There is an early illustration of this when there is a shout of “I love you Aldous” which initially is greeted by a steely stare, but she then responds “I appreciate that, but I’m busy”.

Either way it is bewitching and beguiling. You are her hung on her every word, her every facial expression, every strum or pluck of the nylon strings.

All of this would be somewhat irrelevant if the songs were not immaculate. The majority of the set with her full band are from this years superb third LP Designer, major highlights being ‘Treasure’ and ‘Fixture Picture’ that have a sad, pensive quality, reaching deep down and dragging up a buried melancholy with, in the formers case, a minimal accompaniment that is beautiful and gentle.

‘The Barrel’ on the other hand is the dance floor filler despite being a piano led and bass driven folk song with some of Harding’s most bizarre lyrics, including “show the ferret to the egg” and this is after the main set was begun by album opener ‘Designer’ which is it’s equal for bop-ability.

The reverence observed is like that of a congregation at a sermon and there is an element of worship, her silent stage presence is at points intense but more so tonight than on other occasions, she smiles. This is her audience, her fans that love her every idiosyncrasy.

She ends with a new song that she has been playing, and ending her sets with, for much of the year, ‘Old Peel’. She stalks the stage playing a mug with a drum stick, her eyes dancing across the faces in the crowd as if she wanted to look every person there in the eye. 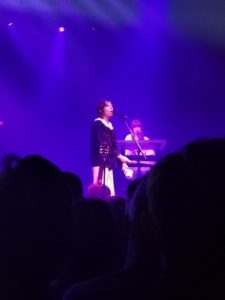 It is a fitting conclusion. Playing a hit or even an old favourite wouldn’t have been right. Something as left field as a brand new song is what everyone expects (although it would have been a perfect end to have heard ‘Horizon’).

In a world of sterile pop, boring stereotypical singer songwriters and the corrosive concept of cool, Aldous Harding is a lighthouse keeping us away from the rocks of mediocrity and uniformity.