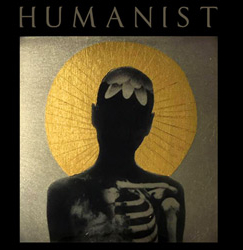 The début self-titled offering from Humanist, the project of ex-Lyca Sleep and Exit Calm guitarist Rob Marshall, is an album that is steadfastly not of its time. For fans of Rob’s previous projects it may not be a surprise that this is the case as whilst they were far from the copycats many dismissed them as they certainly took influence from early-nineties dreampop. The ambition and the quality of the album will not be a surprise to those familiar with his work either, but its scope and the general sound of it may well be.

Humanist is a heavy album. It is heavy in tone, heavy in its lyrical subject matter and heavy in terms of its sheer mass. It easily passes over an hour and across fifteen tracks there is barely a moment of respite after the instrumental opener. A number of guest vocalists contribute to the album and this combined with the multiple shifts in tone gives it the feel of a turn of the millennium blockbuster soundtrack.

The songs that feature Mark Lanegan, surely the Samuel L Jackson of alt-rock vocal contributions in his near-omnipresence, are the main reason for this. Succinctly he sounds like Mark Lanegan doing Mark Lanegan, always offering somewhere between a whiskey-soaked drawl and a whiskey-soaked growl. The music behind him sounds like the music you’d expect him to drawl or growl over – it is aggressive, widescreen and perfectly crafted. Were the album not to possess such a generous tracklist there would be a very real prospect of it feeling like a Lanegan solo album. He casts a long shadow and is always front and centre, whilst Rob is nothing if not the master of the backing role.

In truthfulness, however, the songs that Mark guests on are amongst the least interesting on the album. It is on the one-two of ‘English Ghosts’ and ‘In My Arms’ where Humanist is at its strongest. The former is a near nine-minute blast of krautrock featuring Membranes vocalist John Robb that rides the locked-in groove that all good krautrock does whilst the latter is a soaring radio-ready slow-burner that brings to mind Longview or early Embrace. That the jump between the two doesn’t sound too jarring is a testament to the meticulous composition of both songs and the album as a whole.

Other highlights are the two tracks that feature contributions from American poet Carl Hancock Rux. Of particular note is the extraordinary ‘Mortal Eyes’, which rides on a repeated uttering of “Keep it moving, keep it going” and evokes Gil-Scott Heron and Puressence at different points whilst somehow not sounding like an absolute mess. The line “A whole lot of dead boys and a whole lot of lost girls are swimming through their tears here in this place we call the now” is representative of the sense of foreboding across the track, and indeed across much of the album.