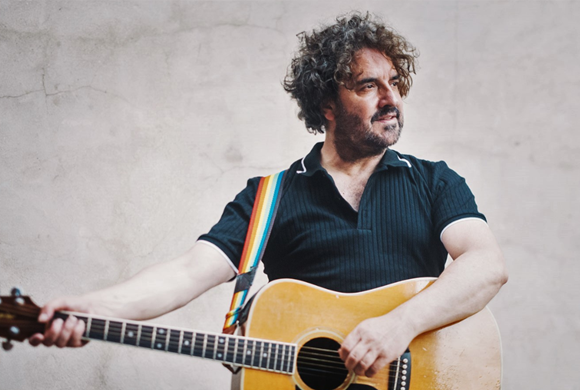 It’s not often that I’m struck by surprise in an interview. But on hearing that Liverpudlian cult legend Ian Prowse wrote the epic ‘Does This Train Stop On Merseyside?’ in fifteen minutes, I nearly lost it. How? Well, we’ll come to that.

When I call him up, he’s at home in the city, not far from the legendary Mathew Street. Although he was born on the Wirral side of the Mersey, for the past fifteen years he’s called the city itself home. He’s been making music for a number of decades, and 2020 sees him hot on the heels of his acclaimed solo album Here I Lie, as well as the release of a new career-spanning compilation and heading out on tour as support to Elvis Costello. ‘We’ve been friends for twenty years,’ he explains. Complimented by Costello on the new album, he offered his services as support, but the man formerly known as Declan MacManus simply said ‘Do the whole thing!’

‘Of all the people who originally inspired me,’ Ian says, ‘he’s the one who has kept the standard so high’, nodding to the likes of Paul Weller and Joe Strummer as others who made an impact of his early songwriting, and acknowledging the impact and longevity of Bruce Springsteen, too. His earlier group, Amsterdam, worked on the Liverpool Number Ones project with Costello, on a cover of ‘Don’t Throw Your Love Away.’ Prowse describes the original version as ‘excessively fucking chirpy.’

Just as New York runs through Lou Reed’s work, so Liverpool throws through Prowse’s. I ask who else inspires him from Liverpool. ‘Growing up, you’re always aware of the seismic impact of the Beatles,’ he tells me, and then later the whole of the Eric’s scene. The legendary late-seventies Liverpudlian locale was most famous for Echo and the Bunnymen—’you’d see Ian McCulloch walking around’ as well as the likes of The Teardrop Explodes and Wah! Bands got to know each other. This has remained the case for decades – Brian Nash, formerly of Frankie Goes To Hollywood is one of his best friends and has just moved back to Liverpool after thirty years.

Liverpool isn’t that big a place—and it was easy to see these people around. ’You get into the music scene you realise they’re all crazy!’ he marvels of the characters (telling me some interesting stuff off the record). There’s all sorts of theories and rumours about ley lines running down Mathew Street, much of which comes from the legendary Bill Drummond.
‘The city itself is as much of an inspiration as any band,’ he reflects, though it’s not all perfect. ’If famine and slavery are the mother and father of Liverpool, no wonder the child is so troubled. ’

But he’s looked far further ahead in than just the British Isles. In the 1990s, his band Pele found, to their considerable surprise that they were no.1 in South Africa with their single ‘Megalomania‘ (it reached no.73 in the UK). ‘We didn’t even know it had been released there!’ They were signed to recording giant Polydor who had duly released it in most territories. He recalls: ‘We started to talk about going out there…but the apparatus of apartheid hadn’t been dismantled.’ The first free elections in South Africa wouldn’t take place until 1994. Wary of ending up like Queen, who still haven’t been forgiven in some quarters for playing the infamous Sun City resort in 1984, they didn’t. Describing himself as a ‘left-wing gobshite’ it was something they left well alone.

Pele were the recipients of a lot of Radio 1 airplay (even during the Smashey and Nicey era), but Prowse reflects that this, coupled with being on a major, meant that they were seen as being mainstream by the likes of the NME and didn’t get much coverage there. ‘We did six singles and two albums on a major,’ he recalls, and considers that there was always the worry about being dropped. Even the airplay didn’t mean that they would be immune to being dumped, with bigwigs paying close attention to things like mid-week chart positions.

Yet the music was catchy and life affirming. Prowse describes their debut single, 1991’s ‘Raid The Palace’ as being exuberant and way over the top, wondering how this song managed to get airplay. Not that he’s toned down his views as he’s got older. ‘The actual message remains the same. I’ve written more songs about the monarchy as I’ve got older.’

We discuss the recent General Election result [Great Britiain in December 2019]. ’I’ve been disappointed about those who rode into town on an anti-establishment ticket but who won’t stand up and be counted,’ he says sadly, singling out Manic Street Preachers as being ’nowhere to be seen’ in taking on the government and he’s not the first person I’ve spoken to in recent months who feels utterly dismayed by the direction Morrissey has gone. He does cite his friend Damien Dempsey as being absolutely solid. It is all important to him how he is remembered politically. ‘Whether Pele, Amsterdam or solo, I want people to go ‘there was no backtracking.’ He cites the Pele song ‘Fat Black Heart’ as summing up his views (you can find it on their second LP, Fireworks).

Of course, whether this will be the song he is most remembered for is a moot point. My money, and I suspect quite a lot of others’, would be on a track from his next band, Amsterdam. ‘Does This Train Stop On Merseyside’ was originally championed by John Peel when the band were unsigned. This song reads like a love letter to Liverpool. It is so well constructed and fits so well as an epitaph for Prowse’s songwriting that I assume the construction must have been painstaking. Like Leonard Cohen writing verses and verses for ‘Hallelujah.’ Like Richard Thompson researching bikes to write the perfect British road song in ‘Vincent Black Lightning 1952.’ Like Roy Harper’s vision for ‘When An Old Cricketer Leaves the Crease.’

No, apparently. He wrote it in fifteen minutes and ‘it just poured out.’ And what a song. It references so much of Liverpool it’s breathtaking. The ley line down Mathew Street, the Beatles’ former manager Alan Williams ruing losing the band, and the Irish diaspora. Not all of it easy –‘can’t conceive what those children done/guess there’s a meanness in the soul of man’ references the James Bulger killing in 1993, as much of a dark stain on the city’s psyche as the Moors Murderers were in Manchester. The bit that always moves your humble scribe is the reference to the Hillsborough tragedy in 1989: ‘Yorkshire policemen chat with folded arms/while people try and save their fellow fans.’ ‘I had friends at the game, so I had to get that right.’ He’s understandably very flattered that the song was covered by the legendary Christy Moore (you can find it on Moore’s album Listen).

Of course, he’s continued to write great songs – and while he acknowledges that ‘Train‘ ‘will be the one I’m remembered for’ he talks about ‘Here I Lie’ as being about ‘when I’m dead and my daughter’s having a bad day…the idea that music can defeat even death itself.’ Ian Prowse as Lazarus, it’s a pretty damn good way to be.

1 thought on “IN CONVERSATION: Ian Prowse”