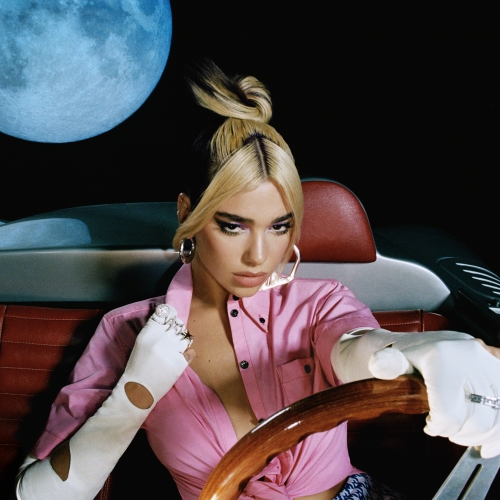 Despite a handful of successful singles and collaborations, Dua Lipa’s self-titled release was plagued by record label issues/delays. Projected release dates came and went, track listings were changed and artwork was (thankfully) altered . After seven singles and two years, the album was launched on the back of her wonderful but commercially-stagnant) Miguel duet, ‘Lost In Your Light’. Fortunately, the hook-filled ‘New Rules’ turned out to be a secret weapon. Combined with the simple and effective video, it quickly elevated her to being a worldwide, award-winning star. Dua Lipa is in a very different position to where she was three years ago when she launched her debut album.

There’s a fevered anticipation about her second album, Future Nostalgia. There are already predictions that this will be a commercial-imperial phase, like Ray Of Light or Teenage Dream. The quality is expected to be similar to the 2010s pop holy grails — such as Emotion and Body Talk. Dua just might pull this off with an expertly-judged campaign and a flawless album full of songs that all dip their toes into 70s disco and 80s pop with a modern day pop sheen. The title Future Nostalgia couldn’t be any more well suited.

Lipa dropped the first single, ‘Don’t Start Now’, last November. It’s a warm Sophie Ellis-Bextor styled disco song. It comes embroidered with a host of irresistible pop trills – a twisting funk bass-line, a neatly placed cowbell, disco strings and crisp synths. If there was a sense that she was trying to see what would stick on her debut, this time she doesn’t bow to current pop trends for an easy hit. Her confidence is obvious as she addresses an ex — “but look at where I ended up, I’m all good already, so moved on, it’s scary”. After several astonishingly good live TV performances, she’s taken an already-great single and sold it so convincingly, it already sounds like a classic. After 20 plus weeks, it’s deservedly still hanging around the top 10 in the UK and is currently top three in the U.S.

The promo single and opener, ‘Future Nostalgia’, finds her brilliantly warning, “I know you ain’t ready for a female alpha”. Again she fills the songs with confidence and attitude. She sings, “I can’t build you up, if you ain’t tough enough, I can’t teach a man how to wear his pants” as the rippling 80s funk (specifically Prince and his proteges) and kitsch Róisín Murphy quirks surround her.

‘Physical’ has struggled to surpass ‘Don’t Start Now’’s chart position,but that doesn’t reflect the song’s quality. She manages to take the perhaps overused lyric, “let’s get physical” and deliver it with a thrilling energy. The pulsing vintage bass-line and spacey atmospherics guide the song into a belting Lady GaGa-esque chorus. When the even more rousing second chorus arrives, she sings, “hold up, just a little tighter, hold up tell me if you’re ready, just keep on dancing” — her conviction turns her words from a plea to a command.

The INXS interpolation on ‘Break My Heart’ pops and snaps with another spectacular bass-line (one of the album’s themes). The stuttering pre-chorus briefly pauses before bursting into another blissful release of disco ecstasy. It’s already being pushed as the next single.

‘Love Again’ is surely another future single with its excellent use of the horn sample made famous by White Town’s just-as-great-as-you-remember single, ‘Your Woman’. It also has the album’s best string arrangement (the intro is devastating) and another winning middle eight as she powerfully states, “I can’t believe I’m not afraid anymore”. ‘Hallucinate’ has flashes of soulful synth-pop (similar to Years & Years in the neon-lit chorus) and the playful bounce of Girls Aloud in the verse.

There’s a 90s pop/R&B feel to ‘Levitating’. It‘s built around a wonky synth hook, squelchy bass (seriously, these bass-lines!) and a shimmering Chic-flecked chorus. She invites us to “come and dance with me tonight”. It’s a classy piece of brilliantly-timed disco escapism. A lot of these songs sound like 2000s throwbacks in the best possible way, such as the slinky and minimalistic ‘Pretty Please’. The whole approach to this release recalls Kylie’s glittery masterpiece, Fever.

Future Nostalgia deviates from its good-time disco DNA on the last couple of tracks. ‘Good In Bed’ uses an off-kilter piano and a breezy swing that’s somewhere between Lily Allen and Lizzo. The repetition of the chorus will be divisive since it’s annoyingly catchy.

The album ends with the empowering ballad ‘Boys Will Be Boys’. It’s Lipa’s ode to equality as she tackles stereotypes — “I know that there will be a man around to save the day, and that was sarcasm, in case you needed it mansplained”. The string stabs and the choir swell as she repeats the title and adds, “and girls will be women”. After the full-on assault of the previous tracks, it’s a touching but unexpected conclusion. Lipa isn’t afraid to wear her heart on her sleeve and stand up for what she believes in.

The album flies by in 37 minutes. Dua Lipa surpasses her impressive debut and her ascent to greatness is fully realised. Her passion is in full view (she’s spoken openly about topics such as politics and sexism many times) as she leads us to the dancefloor. And because this is an invigorating, razor-sharp dance album, some of these song’s messages may be overlooked. The retro flourishes of the album make us nostalgic, but it’s the future that’s Lipa’s for the taking. This is 2020’s first classic.