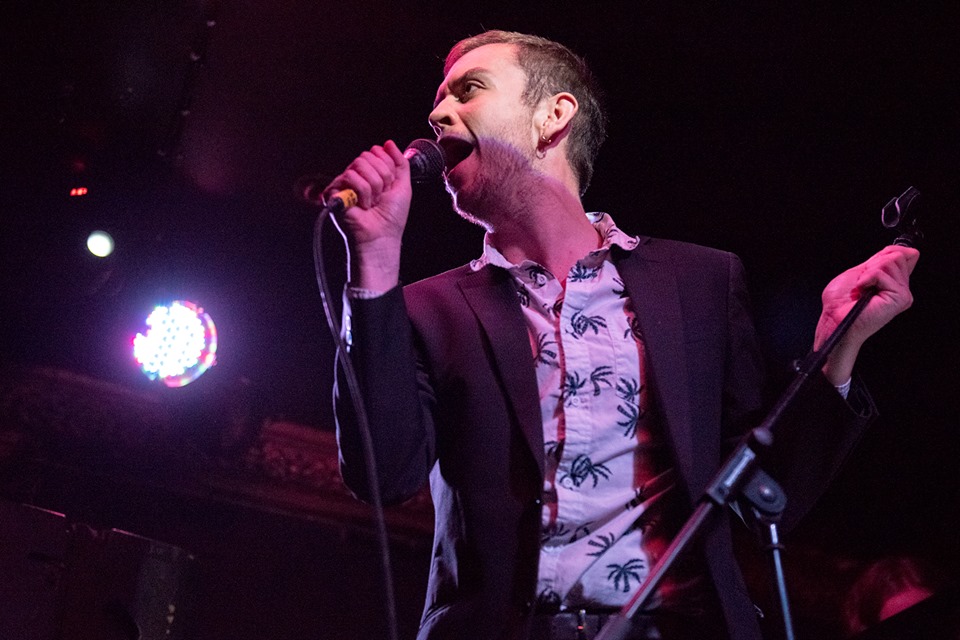 As an extremely popular resource for new music, God Is In The TV receives hundreds and hundreds of emails every day from PR folk and unsigned artists, many of whom are struggling to get themselves heard. Obviously there are only so many we can listen to, let alone respond to, and an awful lot fall by the wayside. There was, however, something in the very polite, refreshingly understated tone of an email from Patrick Malone from Adam & Elvis that piqued my interest. I actually listened to the album, and hey, unlike some of the other stuff we get sent (both signed and unsigned!), their album, Pub Grub, had me grinning like a goon. So, with the album already having been out a couple of months, what else could I do but to give Patrick the opportunity to give us a full overview of each track, which you can enjoy listening to by clicking the link at the bottom. I hope you enjoy it as much as I did! Over to Mr. Malone…

This one is about a doctor who tells healthy people they are done for and tells seriously ill people they’ll be fine. I love songs that allude to crooked characters and as a vocalist it’s fun to invent strange people and bring them to life. The song has two sections, the verse marches on like a tired dinosaur, for a whopping eight times round but then there’s the sweeping, euphoric hook at the end. Dinner and pudding.

As a child I played for a god-awful football team, we lost by seven or eight goals every weekend. No one ever wet themselves on the pitch but it was humiliating. This song is about embarrassment, whether it be romantic or sport based, the sensation is always the same. The chorus goes G7 straight from heaven, makes you think there could be something more. That’s because G7 is my favourite chord and putting humiliating experiences into songs has been a useful way to keep me writing.

I wanted to write something that sounded like The Waterboys, it had to sound big and cavernous, the opening piano line is drenched in reverb. Steve’s synths and the way Tom has distorted my vocals in the mix locate it in the now. The idea was for there to be a sonic tension between old and new and make getting hammered a timeless subject.

This one has the body of a good time ska outfit like Madness, with a snarling head to counter the pop intuitive. When we play this one live I introduce it by saying, “This one is about white people with dreadlocks who drink in starbucks.” I don’t truly believe any individual or any group can be captured entirely in one song, but I think white people with dreadlocks are a fair demographic to rile against. It’s really about people taking pictures on holidays. I’d probably do it too if I ever went on holiday.

Me and Tom saw Tindersticks perform ‘Show Me Everything‘ and knew we wanted to write a cool, slow song. We were listening to a lot of The Stranglers too, Tom was interested in producing an album with only essential elements. The plan was to take the stadium styles of Mike Scott and strip it of any layering or excessive reverbs, basically punk it up. Dan’s delayed guitar creeps into the track before Steve’s dry synth answers it, this is demonstrative of the different stylings at work in this song. And lyrically it’s about the irony of getting happier every year as you get older and uglier. 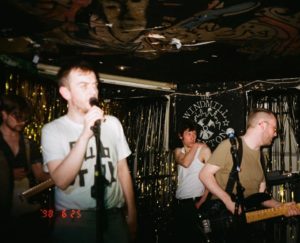 Since the first album Tom, Steve and Dan have developed into amazing musicians and Roddy has come in on drums and Anna on Sax and both these two are seriously brilliant players too. There’s an insane guitar and drum solo at the end of this one which always goes down well live, it wins over the more traditional rock fans. Tom insisted that I bark some fragmented phrases over the solo, he was worried people would think we sounded more like Led Zeppelin than The Fall. Lyrically it’s definitely inspired by early 80s Mark E Smith, the nightmarish brought out of the humdrum.

Out Through the TV

Originally this song was called ‘Frenchy’ because the opening piano chord progression sounds a bit french-pop. There was even talk of me singing a verse in french, the problem being I don’t speak the language. I really like the timing and the movement of the verse Tom wrote and I wish I had done more with it melodically. I wrote it as a critique and love letter to televisions, computers, laptops and phones. I feel guilty about watching rubbish but I understand that guilt is a necessary component of the pleasure I derive from it.

When I first moved to London in 2015 I lived on Settlers Street for a year, it’s a lovely place, just off Whitechapel. The name of it and me being new to London, led me to question if I was satisfied with my accomodation or if I had settled for what I could get. London does this to you, makes you want more. We wanted to write a cool and quirky chord sequence like Devo‘s ‘Gut Feeling‘.

We didn’t want this to be an esoteric album and I remember Tom saying “no abstract lyrics allowed”. I turned to Dan, our guitarist because he was a man of simple pleasures; if I could write a song for Dan I would have the masses! He used to get drunk and ring people, sometimes he would ring me or Tom and other times he would ring ex-girlfriends and potential partners. My favourite bit of the track is the second verse, Steve’s synths are really kooky, sounds like Wesley Gonzalez, who we all love.

I worked at Asda for six years and ‘frustrating’ is definitely a fitting word for the experience. I love Roddy’s Talking Heads style bongos in the verse, teamed with the rise and fall of Anna’s sax. Its sporadic energy is demonstrative of the working pressure and the repression of individual spirit. The verse uses repetition the way a chorus would normally and each chorus is sung differently, I wanted it to seem a little unusual but still poppy. 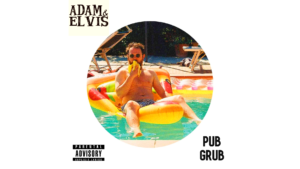