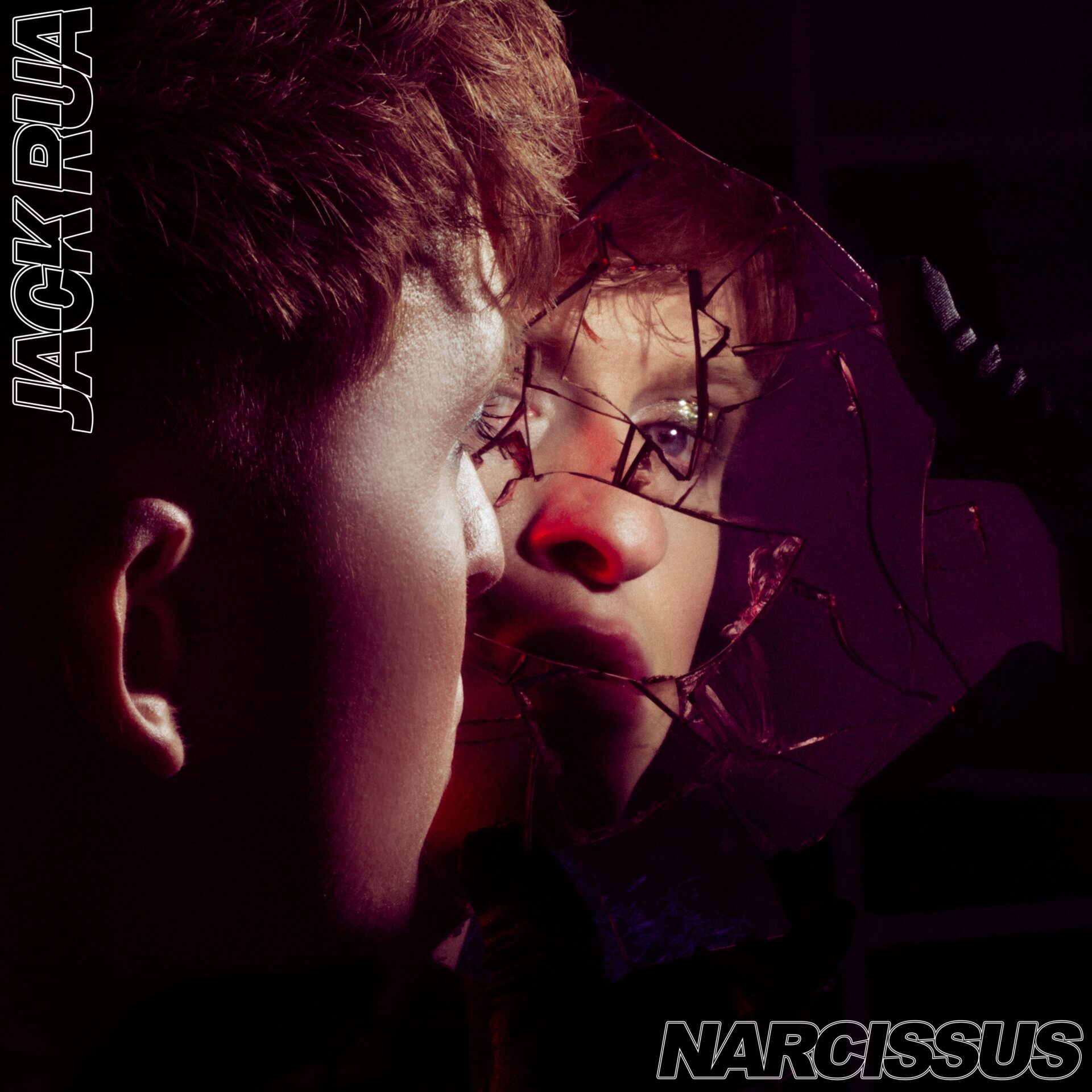 Jack Rua bursts onto the scene with his debut album Narcissus, a brightly shining queer-positive electronic-pop album with a unique point of view and an inherent fearlessness that informs every creative decision made on this project.  The opening and title track ‘Narcisuss‘ is a stunning slow-burner that opens with a sultry repetitive melody that builds with arpeggiating synths and decorated with glitchy vocal effects and dramatic drums that perfectly set the tone for what’s in store.

‘Rise‘ is the next track on the album; it’s a catchy upbeat track about sexual attraction and features a brilliant guest verse from Irish rapper Darce whose lyrical prowess and masterful flow takes it to the next level.  Rua’s vocals on this track are beautiful, showing off his stunning tone and range.  The production on the track is fantastic, everything is perfectly crisp and hits heavily in all the right spots.

‘Curious‘ is another showstopping standout on the project.  It’s about letting go and embracing your sexual curiosity.  It really showcases Rua’s fully-realised sound, their penchant for writing incredibly memorable melodies, and a natural ear for a clean production that sounds expensive.  All of the producers who are involved in this project should be proud of what they’ve achieved.

‘Ego‘ featuring LOUGOS is an anthem about reclaiming your self-worth. Perfectly crafted to transport us to the dancefloor, the infectious club beat in this track carries such confidence and serves a party worth of sounds that builds to a riveting climax full of glitchy vocals and house-inspired samples.

Next up is ‘Scarlet A‘, arguably the weakest song on the album but is by no means a bad song. There’s a sense of something missing in the production that holds it back from reaching the levels of polish established in the tracks prior to this one.  Nevertheless, the songwriting here is on point, the chorus is memorable and fun and the vocals are charismatic ad stunningly detailed with harmonies and ad-libs.

Luckily, things pick right back up with ‘Reckless Abandon‘ an art-pop banger that wouldn’t sound out of place on Lady Gaga‘s Born This Way album, it opens with grand dirty synths and grows into a swirling tempest of rock and roll and electronica.  ‘Forget Me Not‘ is in the same vein as ‘Reckless Abandon‘, with sultry vocals and dirty electronic synths that invite us to front row seats at the Narcisuss Ball.

The album closes with ‘Reflection‘, a tender ballad about self-reflection that provides a complete and welcome contrast to everything else on the album.  It’s a moment of vulnerability that adds a touch of humanity and completely flips the concept of the Narcisuss album on its head.  It’s a very strong way to end the album on a high note while serving us something unexpected but just as polished and as interesting as the rest.

Overall, Jack Rua’s debut album is a strong start for one of Ireland’s most talented artists.  It provides a stunning showcase of their talents and very rarely falters, showing a level of creativity, polish, and cohesive progressive sounds that deserve your attention.