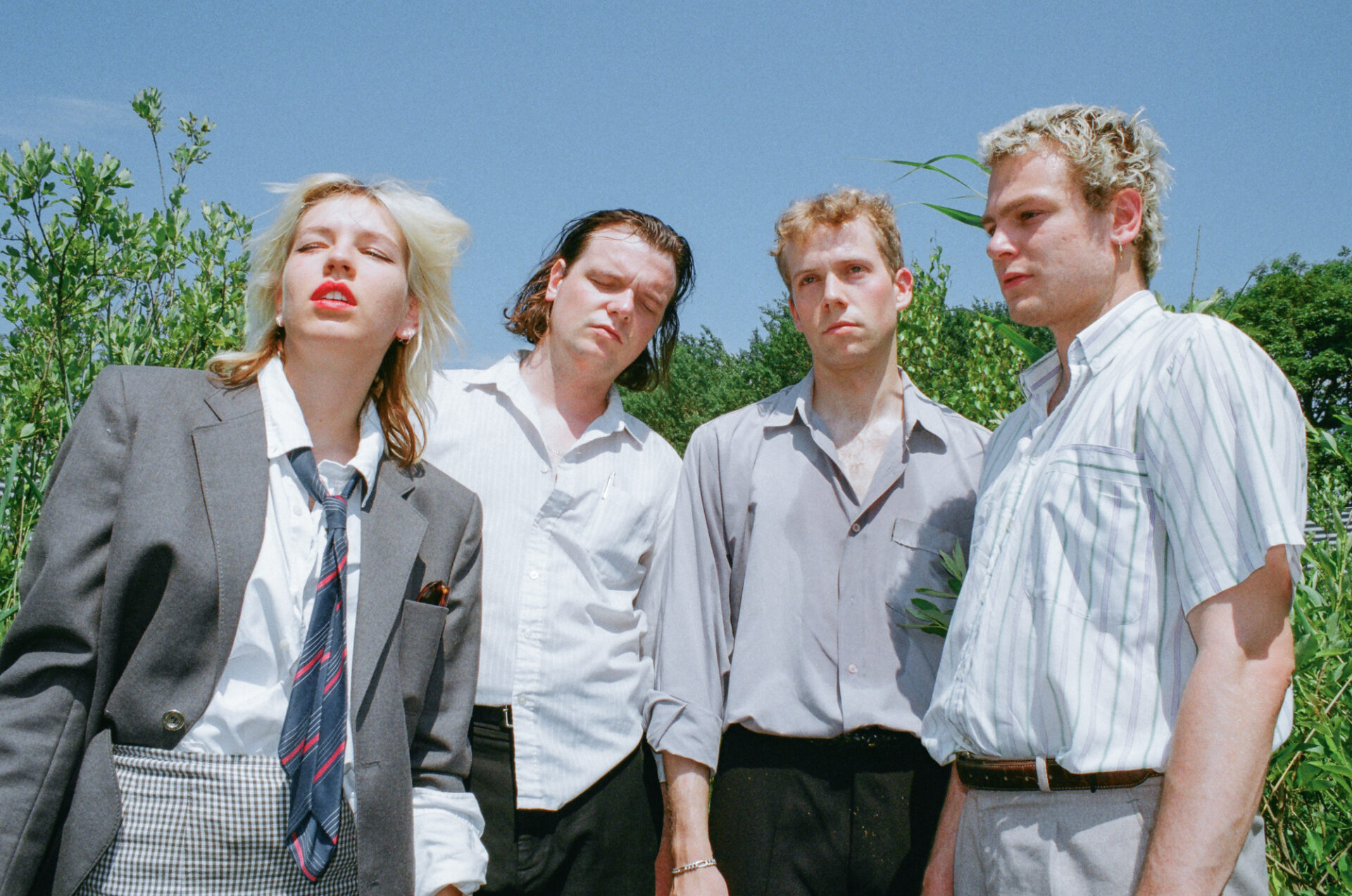 Standing out in a Dutch underground that churns out exceptional bands at a phenomenal rate is no mean feat. But that is exactly what new Amsterdam post-punk quartet Global Charming has achieved with ‘Soft Fruit’ the lead single from forthcoming debut album Mediocre, Brutal.

Their music is an off-kilter and cathartic rhythmic form of therapy, as the band “exorcise the banality of everyday life, knowing the planet is doomed and the printer is out of ink again,” finding big ideas in life’s underlying mundanity. This couldn’t be more important in the face of our new normal, a life of distance, isolation and repetition.

Alongside the rest of Mediocre, Brutal (due out on 9th October) by Subroutine Records ‘Soft Fruit’ was self-produced over at Amsterdam’s Schenk Studio, with Mikey Young on mixing duties. This record proves Subroutine to be on the pulse of the most vital new guitar music once again, following past releases from The Homesick, Neighbours Burning Neighbours, The Sweet Release of Death and Rats on Rafts.

From forming in 2018, Global Charming has fast become one of the most hyped bands in the Netherlands, which really is saying something. Mediocre, Brutal is a  must-listen for anyone one with even a passing interest in post-punk and noise-pop.

We posed a few questions to the band:

How would you describe your sound? Post-punk can mean different things, is “indie rock” it? How do you want to be described?

Indie-rock as a genre doesn’t really resonate with us. If we have to put us in a genre we’re comfortable with post-punk but in the end, it doesn’t say that much about what the music really sounds like.

We make different type of tracks but what they have in common are things like dry guitars, no reverb on instruments, the talking/shouting style of vocals.

One thing that’s really important for us also is leaving holes inside the tracks, leaving space between parts and instruments to create some kind of bounciness.

In your blurb, there’s a lot of talk about the boredom and banality of life? Have these themes been heightened by the pandemic, or is the album in any way influenced by this new normal?

The album was written and mostly recorded before the pandemic hit so it wasn’t influenced by it.

However, the pandemic put a magnifying glass on problems in our society and some of those definitely connect to what our music is about.

What is ‘Soft Fruit’ specifically about?

It’s about a lot of stuff but mostly about recognizing emptiness and personal disconnection but also about making most of things that are corrupted by others. In a way, it’s about accepting your own passiveness.

The video is trippy? What’s that all about?

We tried to make normal everyday stuff look really weird. Like how daily activities can drive you completely insane.

Why should people care about this album?

We made it for ourselves and that’s it really. Hopefully that genuine intention can bring something to the people.

What is it about the music underground in the Netherlands that is churning out so many exceptional bands?

They all know they won’t make any money with it so it must come from a real place? Don’t think that applies specifically to the Netherlands though.

Which bands would you like to be compared to? Journalists are good at lazy comparisons, where do you see yourself?

We don’t care for comparisons but some things we were listening to when we were starting out are Wire, Drinks and Duds.

You’ve played live with some impressive bands, any that stood out?

Crack cloud and NOV3L were cool bands to play with.

What next for Global Charming?