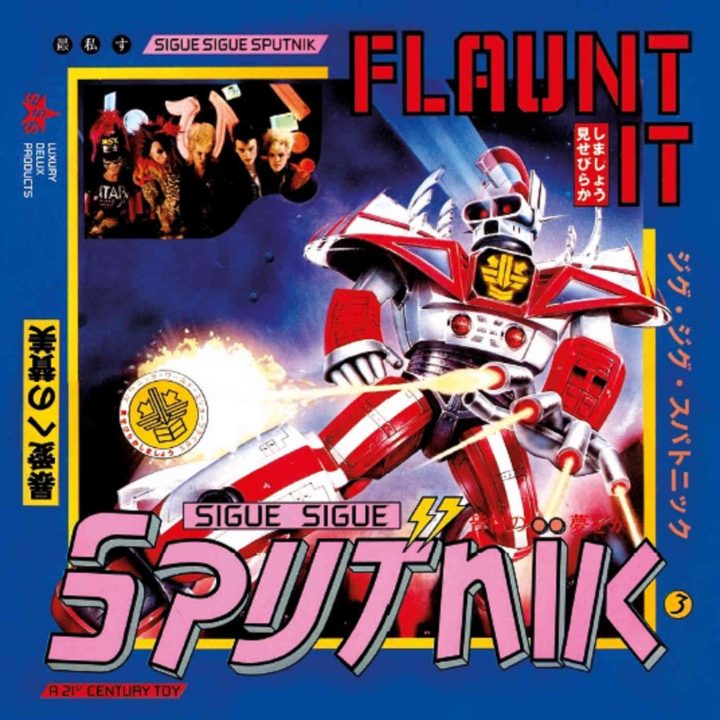 This band, who made quite a splash in the mid-80s, was the brain-child of former Generation X guitarist Tony James. Named after a Russian street gang, they were at the time one of the most hated bands in the history of music when they strode onto the scene in 1986 Britain. The country had woken from the industrial action that had afflicted the UK during the 1970s and had been stamped upon by Margaret Thatcher following her election victory in 1979. The 1980s was a rebirth, full of vibrant colour, big hair, and shoulder pads and music was following suit. Electronic groups – the likes of Kraftwerk and Human League borne out of the 70s – were changing the map and rewriting what was considered normal, although groups like Duran Duran and Spandau Ballet were proving that the normal was still popular. In the wings artists such as Sigue Sigue Sputnik, the punks of their day, were wanting to take this change further.

When I said that SSS were hated, this was no exaggeration, although this was something of a love/hate relationship between fans and the media. The band was treated badly, for what seemed the sake of it. In an interview with The Tube presenter Muriel Gray,
when introducing the band, had started by commenting “The band everybody has been reading about and nobody has been talking about, Sigue Sigue Sputnik. You’ve been doing very well so far, why take the risk by releasing a record?” and the band responded only to be given a further bombardment of negativity, “Are you not scared that S.S.S. are going to be a bit like a funny car sticker…amusing the first time & then you hate it every time you look at it afterwards?” continuing “…you could always have a sticker saying my other band are musicians…”. It was like the kid at school who was picked on because they looked different, but rather than breaking the band, this kind of courtship spurred them on to greater things and after having played hundreds of gigs around the UK, it was EMI who eventually signed the band for a reported £4 million, a figure coming from singer Martin Degville, James cautiously reporting “It was, in fact, £3,999,999” (although something of a more modest £350,000 was, in fact, closer to the truth). However you choose to look at the band, they certainly played a major role in what music would become and although the 21st Century may have seemed a very long way off at the time, as I sit writing this in 2020, it wasn’t.

James had set about creating a band that looked good, working on the basis that “…if people look great, learning to play is easy…” and they certainly proved this to be the case, as their music was something else. I’ve referenced electronic groups and when the band formed, the use of sampling was something that would become the norm in creating music, but SSS were to take this by the scruff of the neck and using samples without clearance in these early days, meant that U.S. copies of their single ‘Love Millie F1-11‘ had to be re-recorded. Taking branding a stage further, the band even sold the space in between the tracks on Flaunt It with advertising, coming from the likes of I.D. Magazine, L’Oréal, and EMI Records, as well as a host of fictitious brands. I remember that this was something of a coup at the time, but rather than being no better than a chocolate fireguard, the band’s mixing of these ensured they became part of the presentation. I remember using L’Oréal styling products at the time, in part I’m sure down to this affiliation. Advertising in this form never really took off, but as a part of the music-brand would become fully formed somewhat later, remember SSS were there first. The band may have been full of hype at the time, or in Tony James’ words, “Good ideas“; it became clear these proved to be the future.

Some 34 years or thereabouts, since the original release of Flaunt It sees this four-disc re-issue. Certainly their most commercially successful album, it brings together remixed tracks from the album, shining a light on just what went into the band. The first disc comprising a somewhat altered state based on the original. Launching the album, unsurprisingly it starts with ‘Love Missile F1-11’, but is 20 seconds short of that on the original release. It would appear that some of the advertising content has been dropped, the same happening on ‘Atari Baby’, ‘Sex-Bomb-Boogie’, and ‘Rockit Miss U.S.A.’, with approximately a minute and a half missing of the original advertising content. Well, why advertise products is that no longer apply, or come to that, are paying for the privilege? It should be mentioned that those adverts relating to the fictitious Sputnik Corporation and The Sigue Sigue Sputnik Computer Game, are still intact. Well perhaps one day, eh Tony? With Tony James bid to buy EMI Records still in place, before a rundown of band members on the track ‘From The Gutter To The Stars’, presented in the same way they did on the original advertising used. These come with several soundbites in a track that amounts to almost 13 minutes, and features those cutting comments that Simon Bates gave the band.

Disc two starts with the original ‘Trailer Mix’, promoting home computers, (remember those?), hi-tech sex, and of course the 5th generation of rock-n-roll. From here the listener is given a wealth of remixed content. This band had it over another band accused of playing to backing tapes while performing, those of Frankie Goes To Hollywood, but this was 2 years after the ‘Sex-mix’ of ‘Relax’ hit the shops and even though we thought ‘Two Tribes’ may have been overcooked, 7 mixes of ‘Love Missile F 1-11’, surely overcasts this earlier dalliance with the format? Including 2 mixes of ‘Massive Retaliation’, as well as the Magic Flute mix of ‘Sex Bomb Boogie’ and ‘Sex Bomb Dance’, demonstrating the technique I’m sure we’ve all played with on first discovering the Left-Right volume dial, as the audio is switched between each channel as the music continues. Simple, but extremely effective.

‘Hack Attack’ starts disc three and continues with a full version of ‘Buy EMI’ as James sings “I’ve got no money, but I’m all shook up, uh-huh… I’ve just signed a big deal and I’ve had some luck, uh-huh… I’ve got shares in the company, uh-huh… I’m making my life a luxury, uh-huh… In for the money, in for the show, I’ve got an idea, let’s go cat go… I’m going to buy EMI…”, remarks that echo Elvis in tone. Something that isn’t hidden is the vocal, which expresses the joy the band found themselves in, especially when they reference those who passed up the opportunity to sign them. 3 versions of ’21st Century Boy’ are included, along with mixes of ‘Dancerama’ and ‘She’s My Man’ and a live version in London of ‘Suicide’, a homage to the original electronic-protopunk Alan Vega maybe? Disc 4 rounds off this set from a band who courted the media with their outlandish antics and is a more conventional 7 track album recorded at Abbey Road Studios. This includes not just the band’s most famous fodder; ’21st Century Boy’ & ‘Sex Bomb Boogie’, but the unreleased ‘Rockit Miss U.S.A.’ and a nod to rock-n-roll in Phil Medley and Bert Berns ‘Twist & Shout’, in a lyric which also pays their respect to the greatest rocker of all, Elvis Presley. Fitting that we should end here, from their “electronic rock ‘n roll – littered with immoveable baselines, pop culture samples… self-glamourising lyrics and a futurist aesthetic”, in their hearts this band were just teddy boys after all.