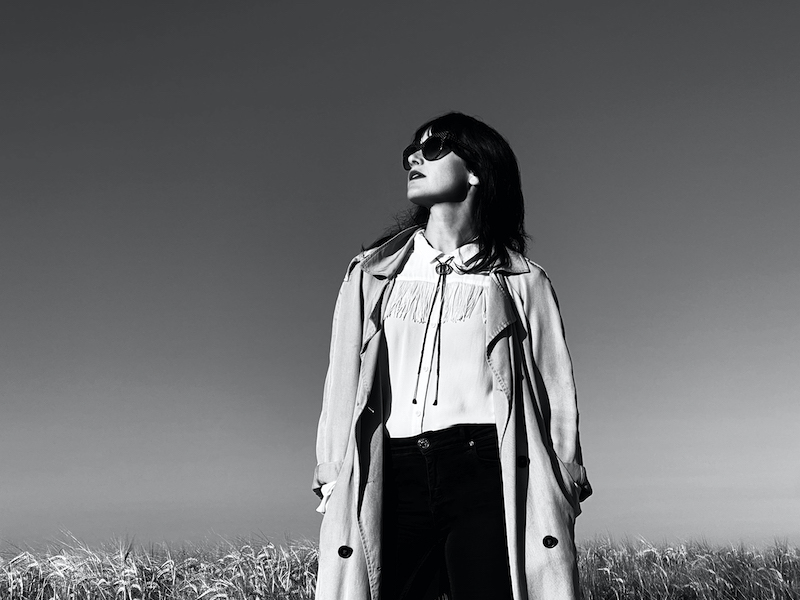 Howling Bells frontwoman Juanita Stein is about to release her third solo album ‘Snapshot’. It’s her most direct and personal album to date informed by her father’s sudden illness and subsequent death.

“It’s a very strange and new landscape of grief to be living in and you have to figure out how you’re going to survive all those feelings” she explained when we spoke recently. “As a songwriter, I guess that’s how I process emotion, so I kind of went into overdrive. The moment my dad went into hospital, I picked up the guitar again, that was my way of coping. I mean, it’s all-consuming you don’t have time to sit down and think “what the fuck is going on!” So for me, writing music was a natural way of processing all these emotions, the shock and the sadness.”

And Stein is sure that her father would have reacted in much the same way had he been in her position. “The predominant spirit of my dad was one of remarkable hope and faith in the universe” she recalls.

“He had a tough life at times but he found his light in music and poetry. He was an astonishingly prolific songwriter, he never stopped, always singing and playing the guitar to the point whereby my mum would be banging her head against a wall!”

From a young age her father had always been connected with Juanita musically, indeed when she was just five years old he took her to a recording studio and she contributed backing vocals to one of his songs.

“From then on, innately I knew that’s what I would do” she recollects. He also wrote “Cold Comfort” which appeared on Juanita’s debut solo album America as well as writing “I’m Not Afraid” on Howling Bells classic eponymous debut album. “He approved of our cover versions” Juanita laughs.

“Joel wasn’t involved in my first two solo records, I didn’t want them to sound like Howling Bells records and he was working on his own project (Glassmaps). But with this record being so personal and so tied to our family it would have been absurd to consider asking anyone else other than Joel. And you forget just what fantastic and inventive guitarist he is. I mean on the opening track of the album “1,2,3,4,5,6” he literally walked into the studio, heard the track once, picked up the guitar and that was it, first take and that was the one we used. He just knew instinctively were to take the song.”

In her previous outings, Stein has often employed lyrical symbolism but this album also includes some of her most unswerving lyrics to date. “I think traditionally I’ve always used symbolism as a way of expressing myself” she muses, “I feel punk for example kind of expresses itself really well – it just lays it all out there, raw and pure, there’s no bullshit or coded language. But for me, I’m able to express emotions through melodies whilst lyrically I’ve always found it a struggle to say exactly what I was feeling because I don’t want to give everything away if that makes sense? Like I need to keep something back for me.”

But on this album different emotions were driving her songwriting, she explains “with something as confronting as death you can’t really mask it, I mean you can try and write some beautiful metaphors but ultimately I felt I owed it to my dad to express what I was feeling.”

When I suggest the poignant lyrics on the album’s title track “Snapshot” conjured up (for me) an image of the famous fading photo from the Back To The Future movie Juanita laughs – “Well, to be honest, I do feel like we are living in a dystopian version of Back To The Future these days, with Biff in power! But as my dad was a writer, I’m left with memories and words and with images and ultimately that’s what I’m trying to hold on to.”

Inevitably the conversation turns to the current global pandemic and putting an album out when the live sector is on its knees. “I’m married to a tour manager and many of our friends are involved in the industry” she states “so I’m seeing it from every angle, people are genuinely struggling. In terms of releasing and promoting the album, under normal circumstances, we’d have been rehearsing for a run of live shows. Instead, I’ll be playing with a full band for a live online ticketed performance at our local studio, Brighton Electric on 1st November. It’s going to be professionally filmed and I’ll be taking as much care as I would with a normal live show. Every pound from every ticket sold will be going to the #WeMakeEvents campaign, I don’t know what else to do, it’s a really challenging time. For now, somebody should perhaps come up with a regular platform that provides a good experience for streaming gigs, one which isn’t just via Facebook because I did find it quite difficult to arrange this show initially.”

Perhaps a professional live streaming platform that pays artists an equitable rate is the way forward. But not one based on the Spotify model which Tom Gray’s excellent #Brokenrecord campaign has eloquently exposed as being inherently unfair and created an unsustainable system of ever diminishing returns for artists.

Juanita responds enthusiastically “I know Tom! He’s wonderful and he seems to really be making progress with the campaign, let’s face it the music industry is fucking prehistoric. So many other industries have advanced. I mean if you look at something as unrelated as the fashion industry were you can’t take advantage of models the way they did in the 80s? And yet the music industry is still stuck and taking advantage with its prehistoric percentage deals. I could do a whole other interview on this!”

It’s obvious that Juanita misses the live performance and the feedback and connection that comes from playing in the same space as an audience, and we finish by chatting about her favourite gigs.

“Well, Howling Bells did a shit load of support gigs,” she remembers. “There was this incredible dichotomy between some of the bands we were playing with and our own experience of travelling the country in splitter vans and not having enough money to eat. So when we supported bands like Coldplay or The Killers we lived for catering! I mean we got fed and it was all free! But some of my favourite gigs were early Howling Bells gigs when there was a feeling we were making ground as musicians and finding our own audience. I remember one of our first sold out shows was in Manchester and there was no feeling like it. And I’ve had some really rewarding solo shows, just please god we get back out there again soon. “