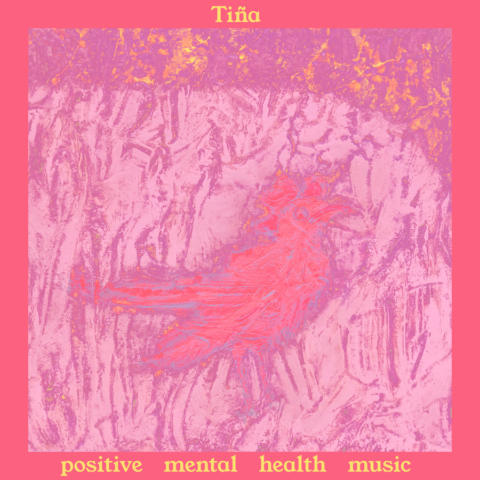 Lennon and McCartney came first, with their version of ‘I Feel Fine‘ in which they sang “…I’m so glad that she’s my little girl. She’s so glad, she’s telling all the world. That her baby buys her things, you know. He buys her diamond rings, you know. She said so. She’s in love with me and I feel fine”. Many artists have told this tale, but in 1987 Michael Stipe and Peter Buck told us in not so many words that ‘It’s The End Of The World As We Know It (And I Feel Fine)’, well at least they were remaining positive. Well stick both these thoughts into the musical blender and you might well arrive at South-East London’s Tiña, who are telling us ‘I Feel Fine’ on their debut album; Positive Mental Health, and after the year we’ve all had don’t we need some of that?

A band signed to the Speedy Wunderground label, home of fellow artists Squid and Black Country, New Road, I have to say it is hard to believe that this will be the debut album release from the label. On first hearing these sounds and having dipped my toes into their philosophy of positive mental health, I was hooked. See them live, even virtually as is all we have these days, then you will find that their quirkiness is something you won’t forget in a hurry, and will feed the twitch that might become apparent.

A five-piece of musicians, the band have at their heart singer-songwriter Joshua Loftin, who with his “…poetic, yet slightly self-mocking” lyrics forms the narrative to these wonderful musical illustrations. This blonde-Billy Corgan sets the air alight, visually with his pink felt cowboy hat and velveteen shorts, but delve into the album, and I’m sure you will agree, it’s far more than that! This same live philosophy is brought to the album, as producer Dan Carey (Fontaines D.C./Warm Duscher), opts to capture this performance by recording three songs in a row as continuous pieces, producing the mindset of a gig. Tune in to the album and what introduces this set of 11 songs is Loftin’s dialogue with higher forces as ‘Buddha’ creeps into sight. A polite introduction is what I would call this number, in which you are made a party to Josh’s prayers to the enlightened one. A dialogue which begins “I put my washout at 1 pm and everyone I know is doing better than me, They say – Josh – you’re doing the best that you can. Well, I spend most of the time feeling like the laziest man. This is fine, this fine. this is fine…”, but further in Josh admits, “…I have been brought up in completely the wrong way. I’m supposed to be open, but I’m closed up most of the day. This is fine, this is fine, this is fine…”. This mantra is something that as a listener you cannot help but love, untangling those knots we all have from time to time and realising that self-doubt is our own worst enemy. Thank you, Josh, but we’ve barely begun.

In a similar vein ‘Rosalina’ brings us to track 2 and Josh’s deep and low presentation tells the story, “Poor Rosalina, I had to kill her…” and it doesn’t go much better for Jebediah, who befalls a similar fate, but the melody is such a well-honed affair that I cease to care about either of these souls. These guys certainly know how to write a tune, it has been said that “the tracks are hook-filled, dynamic and even danceable at times”. I’m barely given enough time to draw breath and as the aforementioned ‘I Feel Fine’ strikes up, this is another truly remarkable number, starting with a rumbling bass riff, leading onto a riding guitar, which completes with percussion, laying the foundations and setting the stage for the vocal, “The only time I feel fine is when I’m writing it down… it’s in the sky, vaginas in my mind…” and the intrigue is set. Where is the number leading us, a psycho-sexual ride into Loftin’s anxieties maybe? This doesn’t matter though, when a tune has been so well constructed these thoughts are just piffle. The band works out of the Brixton Windmill, a pub-venue providing a nurturing space for musical experimentation, with a particular bend “to weirdo sh*t & people with strange personalities”, this according to bassist Adam Cartwright. “It’s a home and community for so many people”, something I can remember local to myself once upon a time, but that’s for another story.

Before we have time to give this any further thought, another tune, full of rolling thunder is brought in. In ‘Rooster’, Loftin has lifted his vocal range and is singing almost unrecognisably from the rafters. So much so it could be another vocalist (but watch live performances and you will see how it’s done) and becomes another hook onto which they can hang their hat. In ‘Closest Shave’ he continues in what becomes a child-like vocal style, this time complimented by Goat Girl‘s Lottie Pendlebury before he sees fit to offer a raspy vocal approach in the tune ‘Growing In Age’. This then quickly changes tack, as we are allowed to witness the almost nubile ‘New Boi’, in which a less raspy Loftin sings “My body is holding stories of the last choice that I made…”. As the song continues, self-doubt can be seen creeping into view, as he asks to “…set me free from this rejection of mine…”, in a song that is played to a swing beat, with an augmented musical arrangement. This screams of a Country-vibe, which again is just another string to their bow, as we have already heard Grunge and Indie-rock brought to this party.

The audience gallops through ‘Golden Rope’, as the song starts, “Where are we going and can I come…” continuing in a slightly macabre fashion as the chorus is brought in “…I see a golden rope, hanging in every room… Let’s talk about mental health, Mum…”. Brushing this theme, the next number, ‘It’s No Use’ continues by offering a more downbeat take. Not depressingly so, though this is in a tired fashion which becomes obvious, lamenting “…it’s no use anymore. Blue velvet blanket on the door…“, eventually opening up to a briefly held musical vista which subsides, putting the number to sleep just like a baby in its cot.

Next up is the track I’ve been waiting to hear. ‘Dip’ is another tune in which the backing vocal is offered by Pendlebury. Here Josh quite unashamedly offers “…my body filling up with ice, I’m desperate for some sex…”, before what seems the assembled band asks “you, who me, yes you, it’s time to dance…”. A celebration of that uncertainty we can all suffer from, from time to time. I have read, when explaining the shoot for their video that accompanies the single, Josh has said “There’s a good shot of me running in my pink shorts and cowboy hat, nothing else, to the middle of Westminster Bridge with a microphone. It took about a minute for the police to come and tell me to get out of the road. Tourists were taking pictures and cyclists were shouting ‘go on, son!'” This might perhaps provide a little insight into this band, so let a little light into your life by seeking out this video on YouTube.

And now it is time for bed, as the final number ‘People’, quite aptly resolves this journey. Starting “….people, hey people, people, let’s go for a walk in the world. We can learn something new from each other…”, it’s with this inclusive look at life, and what tomorrow might become, that I shall leave my view of probably the most inviting album of this year. Josh and Co. have taken us by the hand through these dark times and produced an album so full of treasures, that I wasn’t expecting the bounty I had been witness to, and it’s these small things that will not only raise a smile but will stay with you. Promoting your positive mental health, all for the cost of an album – with no expensive and time consuming therapy sessions to pay!