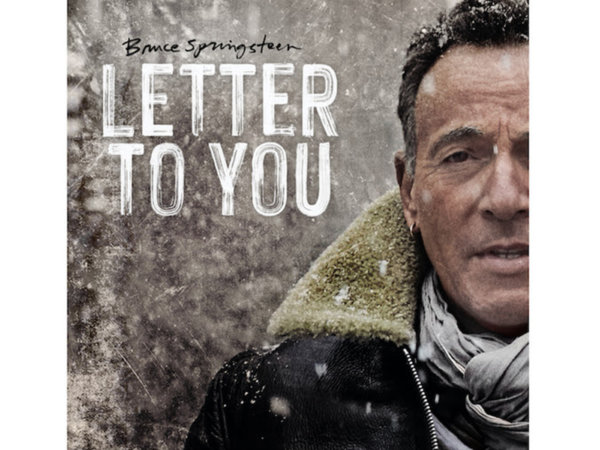 Given how ageist rock music can be, it’s impressive that increasingly many artists reach retirement age – and beyond -still crafting excellent work and still staying relevant. Letter To You is Bruce Springsteen‘s twentieth studio in total, over a course of nearly fifty years, beginning with Greetings From Astbury Park, New Jersey. It’s been barely sixteen months since the release of his last album, Western Stars, and the first time that he has been backed by the E Street Band since 2014’s High Hopes.

While this feels like a wonderfully fresh recording, funnily enough, three of the songs on this album date from the seventies and before the aforementioned debut- ‘If I Was The Priest,’ ‘Janey Needs A Shooter,’ and ‘Song For Orphans.’ Given that he’s now 71, and twice the age he was when he released his most famous album Born In the U.S.A., in lesser hands the themes of looking back and relationship with audience and band members might have made for an indulgent record, that overshared, stuck in the past and trading on past glories. Mr. Springsteen is not that artist, thankfully.

The album opens with ‘One Minute You’re Here‘ a song that suggests we may be in Nebraska-territory, brooding and solo, but slowly builds and brings the band in. The title track and the fantastic ‘Burnin’ Train‘ show that epic does not have to equal bombast, as they pull us into an album that commands your attention. From its’ first listen, ‘Burnin’ Train‘ is sheer euphoria, a song that you can imagine lighting up Springsteen concerts from New Jersey to New Zealand (once these can actually take place again).

The reality is that in Springsteen’s more than capable hands, this is a record that manages to take these strands and use it as the starting point rather than the end result. It’s up there with some of his best records, and contains songs that seem likely to join the already impressive Springsteen songbook. ‘House Of A Thousand Guitars‘ and ‘Power Of Prayer‘ would be album highlights on a lesser artist’s album, here, they are two of many great songs that show he is still in fine form both in terms of song-writing and vocal ability, and show just how much of his back catalogue is timeless.

It’s possible that he may have saved the best for last, ‘I’ll See You In My Dreams‘ is a strong finale, not the moody reflective song you might expect from a title, but the hint of more to come. In a year where almost no-one expected things to turn out the way they have, a good, solid Bruce Springsteen album is a cause for joy. The fact that this is an excellent album even by Springsteen’s own high standards is reason for celebration.

Long may he run.