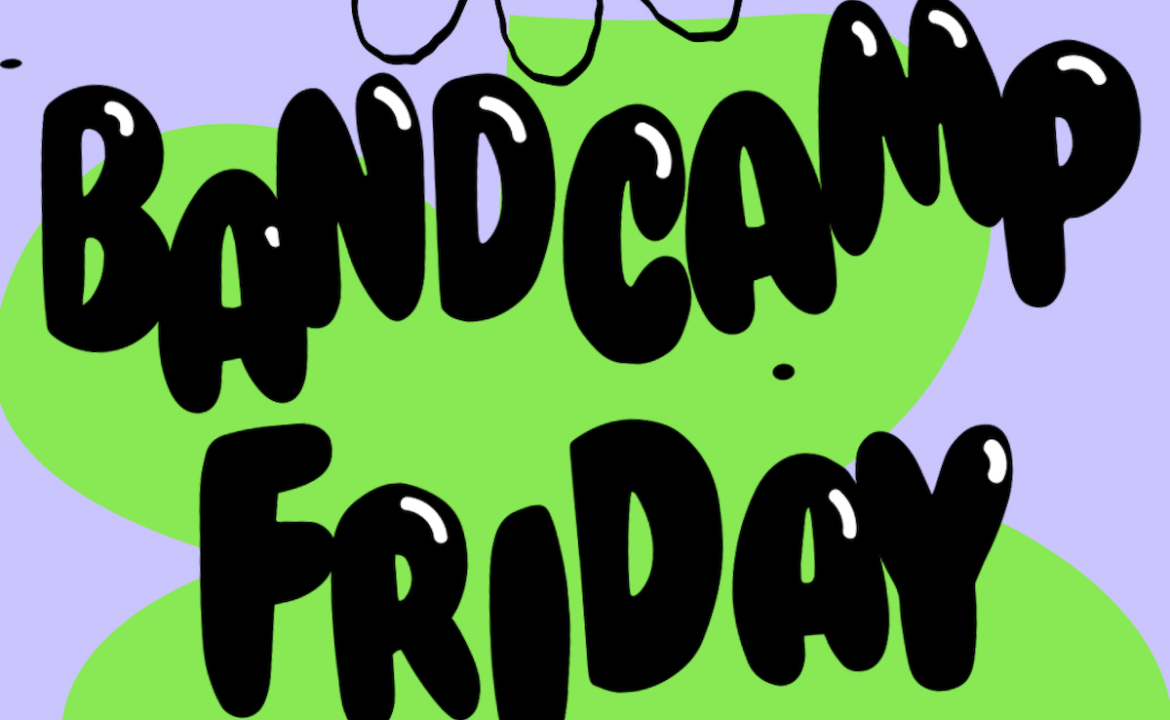 Tense couple of days, right? Up late? Yup, me too.

Topping this month’s list are dream-pop provocateurs, Firestations. Automatic Tendencies is the first EP in a projected trilogy, and the eye-catching thing about that is the bundling up of new material with fresh takes on old favourites, including remixes, so-called ‘sunken’ alternative versions, and the promise of Firestations covers by other artists still to come. With the ongoing curtailment of live music, it’s an intriguing route to take.

You might have heard some of it already as it’s been getting a bit of play on 6Music, and it’s quite beatifically serene and summery, although tracks like ‘New Device’ and ‘Small Island’, cast an improbable, noonday shadow. It plays out with ‘Just For a While’ which is as gentle and melancholic as Nick Drake’s comfy jumper. Sweeter than a dead fly in a sherbert lemon.

The kologo is an instrument that requires no introduction to regular readers of this column, engrossed as you no doubt all are in the seminal compilation This is Kologo Power! which you picked up in Sahel Sounds pay-what-you-want deal last month. Well, newbie kologo aficionados – you’ll want to put in a pre-order for the debut LP from Alostmen, the new band from Ghana’s Stevo Atambire. Entitled simply Kologo, it was recorded on the road in Ghana and Uganda and features a host of guests including legendary Afrofunk superstar Gyedu Blay Ambolley.

Atambire has a reputation for innovation on the famously homemade African kologo scene – he uses non-traditional tunings and effects and mixes reggae, hip-hop and Malian blues into his songs. The album’s eponymous teaser track is a celebration of the power and history of the kologo, which according to some scholars is the prototype of the banjo and possibly even the guitar itself. It certainly packs an invigoratingly percussive bang.

One of the most startling releases of 2020 is Netta Goldhirsch’s Love Does Not Exist, and if there’s still a copy of the physical release left at Wormhole World, you’ll be a very lucky Bandcamper. Each of Goldhirsch’s songs are miniature dramas of repulsion and ambivalence in which she rejects pretty much everything that everyone seems to want for her, even, and sometimes most particularly, herself. Particular highlights include ‘I’m Complicated’, the entire lyrics of which consist of ‘You want me to be simple / but I’m complicated’ on mournful repeat, and the Patti Smith-like monologue, ‘My Mood is like the Seasons of the Year.’ Relatable AF.

Packing 25 tracks into its 43 minutes, Love Does Not Exist is determined to struggle with you – one minute it pulls you close, only to push you away the next. Goldhirsch’s musical collaborator Pete Murphy has conjured up an unnerving soundscape – a stop-start mixture of ambient skronking noise and hauntological lounge noodling that creates an uncomfortably voyeuristic aural effect. The nursery rhyme lamentations sometimes feel a little bit half-formed, but the occasional slip is easily forgiven due to the very great altitude of the album’s high points.

Photograph EP finds Keeley Forsyth in a ruminative mood, and who can blame her. Back in January she’d put out the superlative Debris and was planning a live show of low-key, Bowie-ish theatricality that was going to involve a specially created art environment and experimental physicality.

With that project on ice, at least for now, she’s back with a suite of downbeat, lip-chewing monologues somewhere on the outskirts of song. Where Debris identified itself with the slate-grey expanses of Forsyth’s beloved moorlands, it’s tempting to interpret Photograph EP as more domestic in scope – a quartet of tense, locked down vignettes, yearning for company but ready for sudden moments of violence. ‘Unravelling’ finds Forsyth placing her trust in her inner voice and the tangled umbilical that joins her mind with her body. The flip side is positively stately – ‘Glass’ and ‘Stab’ feel eerily still, and in some telling way inconclusive.

On the trail of the elusive jazz/death metal fusion album that exists perhaps only in my mind, I found my way to Italy’s I, Voidhanger Records, who style themselves as purveyors of “obscure, unique, and uncompromising visions from the Metal Underground.” While it’s not quite what I was looking for, there’s plenty here to like, and I’d say that a couple of upcoming releases by Belgian enigma Ôros Kaù might be worth a punt.

First up is Theosulphuros, their split LP with Mexican death metal band Precaria, a headlong, soul-purging exploration of the divine fire that purifies the seeker-after-truth. Both bands then have their own full-length albums coming this month, but I’m personally edging towards tipping more than just my hat to Ôros Kaù’s offering, Imperii Templum Aries, with its predilection for Greco-Roman hermeticism, obscure twentieth-century occultists and demonic anarchist philosophy.

Venezuelan bass wrangler Raúl Monsalve’s new record Bichos is an ego-annihilating conundrum of funk, afrobeat and electronica. Produced by Malcolm Catto of Heliocentrics, the LP draws on collaborators from London, Paris and Venezuela, including an all-too-brief appearance from the legendary Betsayda Machado.

The symbolic butterflies, pigs, mosquitos and fleas that populate the songs of Bichos celebrate compassion and resistance as much they decry corruption and political division. Overwhelmingly though, it’s tour-de-force of percussion. Monsalve is a devoted exponent of the indigenous and African roots of Venezuelan music and has pulled off an album at once modern and completely timeless.

It feels like a lot more than a simple homage to the usual liminal suspects. ‘i pass through the eye of it’, is a piece of songwriting that melds biblical imagery and personal myth-making with the confidence of a young Nick Cave and there’s something quietly unsettling about the morose hallucinations of ‘dog shaped man’. The tropes of folk horror always seem to be in danger of coming unstuck, losing something in their own over-theorised, academic knowingness, but there’s a simplicity and understatement to Hackles’ work that goes way beyond.

Ampiano is the house sound of Pretoria, and Ampiano Selections is the debut album from 19-year-old Lutendo Raduvha, aka Teno Afrika. It occupies the more cerebral end of underground electronic music, thanks perhaps to the influence of South African jazz (think Hugh Masakela) – off-kilter bass-lines decorate subtle, minimalist beats. It could all be a bit lifeless if there wasn’t such a warm and serious emotional commitment underpinning the enterprise. Like a lot of great house music, it’s really extremely introspective.

More horror film music came my way earlier this month, this time from Cardiff’s Lupo Rosso. Hell is a collection of instrumental synth moodiness, in the vein of John Carpenter or the Goblins, although if you ask this reviewer it’s just a tad uptempo and optimistic to fulfil the brief it set for itself. And that’s no bad thing as it’s nearing 3AM at time of writing and at this point I just need something, fucking anything, to distract me from the orange ghoul trying to shit on his own trash fire, or as we used to call it, American politics.

The album’s best moments are the less obvious ones – the gritty, industrial throb of ‘The Toll’, and ‘Feel’, built around a single, unintelligible vocal loop that prowls anxiously in and out of the beat demanding… something…

Lumping these releases together, probably unfairly, as they’re linked by Disintegration State, which boasts an impressive roster of knob-twiddling drone merchants. Sunbane’s Crooked Timber throws a load of guest vocalists at some unspecified personal crisis and comes out far better than you’d imagine. It’s sophisticated, multi-layered and wears its heart on its sleeve.

The Detective is Dead by Mute Branches might be a ghost story, or it might hint at more earthly terrors. Inspired by small towns, UFOs and derelict financial districts, it’s a powerful cocktail of the industrial, the folkloric and the ambient, split down the middle by the pulsing, irrational buzz of ‘My Legs are Eels’.

On a related note, the co-founder of Disintegration State, Steve Hadfield, has his own release out soon. You’ll find Displacement Activity Vol. 3 over at Barcelona’s See Blue Audio, the last chapter in a trilogy that documents the rhythms and rituals of parenthood in the uncertain and claustrophobic atmosphere of the pandemic.

Talking of the pandemic, ambient music, with it’s the radical decentering of the subject, is the perfect media at the moment – something invisible, pervasive, both there and not there and requiring a kind of blank, reticent vigilance from you.

Here in Wales, pretty much the entire population has declared itself winner of the Welsh Music Prize over the last few days (can’t think where that idea came from), but none with more enthusiasm than Right Hand Left Hand, who are at least actually nominated for their brilliant double LP Zone Rouge. In celebration of this RHLH have put out a download only acoustic version of live favourite ‘Stanislav Petrov‘, as recorded by Rhodri RHLH’s solo side project Ratatosk.

Zone Rouge itself is a musical tour of abandoned places. See below for details. It’s really rather superb.

Once again, if anyone has anything they want to share, please hit us up in the comments. And yes, you may recommend your own album, because this is a safe space where no one is going to think you’re a tacky little money grubbing attention seeker. We just want to know what to buy to make the world better.