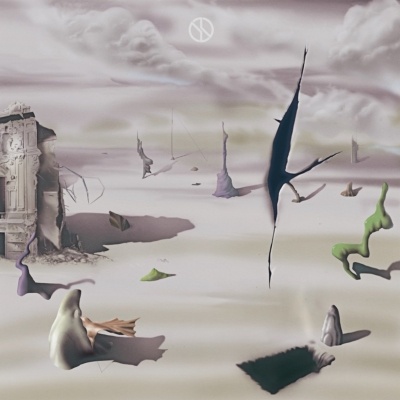 When you live in a world where the dystopian future is happening right fucking now, where a film like 28 Days Later is actually upon us and 2012 is around the corner, you have to invent your artistic licence. Helpfully, LICE have given us a guide through this hellish world, part Terry Pratchett, part Salvador Dali masterpiece. They’ve taken to the social medias to give a blow-by-blow of each song so you could just read those really.

But don’t. Not yet. Stay. I might say something funny or interesting. This is a concept album. That’s not a dirty word. Unless the concept is particularly filthy. The story for this record involves the protagonist, ‘The Conveyor’ (Track one) as they make their way through the Wasteland to “expose the shadowy R.D.C”.

The song, and opening track, was written after being inspired to use drum machines and vocal effects from a live show (remember them) and when they’d begun to listen to more Industrial music. If you were going to compare them with anyone it would be an Industrial band like Tool, especially with their experimentation and elements of Prog. The best way to describe this album is not with facts, they are doing that far better themselves, but by what it makes you see. The best concept albums are like technicolour movies, like Mansun’s Six, and its imagery.

The premise for the record is reminiscent of a Tolkien quest but the harsh, jagged edges and distortion gives nightmarish imagery. In this case, the anger and violent nature of the music and subject of the album, the evil ‘R.D.C‘, which must allow parallels with our and the U.S government. Although obtuse, you feel it must have been in their thinking, although wrapped up in a fictional world, the Wasteland could easily be about the times we live in, and the rise of the right and fascism. The concept of those in power brainwashing and cajoling their supporters and subjects to fight amongst themselves, to divide and conquer, to potentially produce a dictatorship circumstance, and allow humanity to eat itself.

The album is opened using an instrument they made themselves, the Intonarumori, based on the writings of the early 20th-century Italian Futurists, which also influenced the protagonist’s voice. This only adds to the mystery and intrigue. For the most part, this is an angular post-punk infused record but with heavy, abrasive guitar and pounding drums and percussion. There are elements of EDM in tracks such as ‘Persuader’, which closes Part One of the album (Side A) as the Wasteland disintegrates.

‘Serata’ is much more sedate and is very cyclical and minimalist, a theme they have tried to incorporate throughout the record whilst trying to mix Industrial sounds in, which gives it it’s own narrative away from the story. The album is as much about textures and rhythms as it is about the lyrics. The final track ‘Clear’ concludes the story and the reconciliation between all parties. A tidy end with a bow. If only real life would come to the same conclusion.

That a band is looking to create more than your archetypal album is worthy of your interest alone.

It isn’t necessarily an easy listen. Sections are abrasive and even Avant-Garde, with shades of Black Midi, but underneath it all, you can feel the element of a quest, a purpose, and a journey, for themselves as much as humanity.

Much went into this album, concepts from a myriad of writings, art and philosophy and their own creations, the fictional world, and very real inventions.

More of this, please.